On August 5, President Barack Obama announced that 48 new advanced battery and electric drive projects will receive $2.4 billion in funding from the Department of Energy under the American Recovery and Reinvestment Act. The announcement marks the single largest investment in advanced battery technology for hybrid and electric-drive vehicles ever made. DOE funds will be matched by another $2.4 billion from the award winners.

Four companies were selected in the "advanced vehicle electrification" category. The largest amount, $99.8 million, will go to Electric Transportation Engineering Corp. (eTec), a subsidiary of ECOtality Inc., to undertake the largest deployment of electric vehicles (EVs) and charging infrastructure in U.S. history.

On August 2, Nissan introduced the LEAF (Figure 6), which the automaker calls the world’s first affordable, zero-emission car. Designed specifically for a lithium-ion battery-powered chassis, the LEAF is a medium-size hatchback that seats five adults and has a range of 100 miles. The car will launch in the U.S. in late 2010. U.S. production will begin in 2012, at Nissan’s manufacturing facility in Smyrna, Tenn. Nissan chief Carlos Ghosn has said the LEAF will cost about the same as a gasoline-powered car. 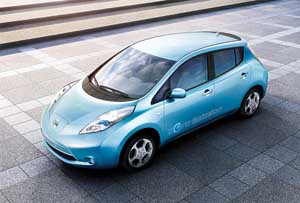 6. The electric vehicle, take two. When Nissan rolls out its all-electric LEAF in 2010, it will become part of the largest test project involving electric vehicles and charging infrastructure. Courtesy: Nissan