The four-unit Sunbury facility, which began operations in 1949, was shuttered last year after 65 years of operation. Originally built for Pennsylvania Power & Light, it was sold to a private firm in 1999. The closure was blamed on economic and regulatory factors—competition from natural gas and impending Environmental Protection Agency mercury regulations.

The new 3 x 1 combined cycle plant, to be named Panda Hummel, will be built on the same site, immediately adjacent to the retired Sunbury Power Plant (Figure 1). Panda said it would take over some of the existing infrastructure, mainly the electrical interconnection, water intake, and storm water runoff systems. At 1,129 MW, this will be one of the largest coal-to-gas conversion projects in the U.S. 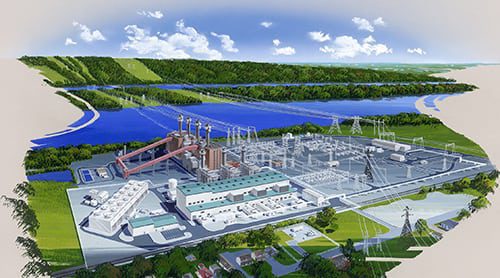 1. The new Panda Hummel Station power plant will be built adjacent to the retired Sunbury Power Plant on the banks of the Susquehanna River in Pennsylvania. Courtesy: Panda Power Funds

Panda, which is building two other combined cycle plants in Pennsylvania—the 829-MW Liberty and Patriot plants in Towanda and Williamsport, respectively—is turning once again to Siemens and Bechtel for a turnkey project. The three companies have partnered on several other plants in Texas and the northeast. Two of them, Panda Temple and Panda Sherman, were named 2015 POWER Top Plants.

“This is the seventh project that Panda has chosen to use Siemens’ advanced technology for our power projects,” said Todd Carter, Panda’s senior partner and president. “We have a great relationship with Siemens and look forward to working with them on the Hummel Station project.”

Bechtel will be responsible for the engineering and procurement for the balance of the plant, and the installation, construction and commissioning of the facility.

Panda Hummel will access natural gas through the MARC 1 and Transcontinental regional gas pipelines, relying on ample gas supplies from the Marcellus region. It will also benefit from its close proximity to the Susquehanna-Roseland Electric Reliability Transmission Project, a recently completed 146-mile, 500-kV transmission line that was one of several projects fast-tracked by the Obama administration’s Rapid Response Team for Transmission.

The plant is expected to begin operations in early 2018, with construction taking approximately 30 months.