The Environmental Protection Agency’s (EPA’s) proposed Clean Power Plan (CPP) will cut power CO2 emissions to levels not seen since the 1980s in addition to giving a big boost to renewables at the expense of coal, the Energy Information Administration (EIA) said this week.

In its “Analysis of the Impacts of the Clean Power Plan” report released on May 22, the EIA took its Reference Case assumptions in the 2015 Annual Energy Outlook and considered how the CPP would affect its projections. While the Reference Case has CO2 emissions staying more or less flat at around 2,300 million metric tons through 2040, the CPP would cut them to 1,500 million metric tons by 2025, a level the U.S. last saw in the early 1980s. Power sector CO2 emissions would be 25% below 2005 levels in 2020 and 34% below 2005 levels in 2030.

The EIA noted that because the CPP emission standards are constant after 2030, fossil generation could grow beyond 2030 as long as the same average emissions rate is maintained (i.e., renewables grow along with it). Thus, the revised model predicted that emissions would grow slightly after 2030 and would be 30% below 2005 levels by 2040 because continued growth in electricity demand would lead to additional generation from fossil fuels.

The EIA also considered the effects were emissions targets to decrease after 2030, in which case levels in 2040 would instead be 45% below 2005 levels.

The effect on the power mix would be to accelerate the transition toward natural gas and renewable generation, with coal giving up most of those increases. Under the EIA’s Reference Case, renewables and gas would grow to 18% and 31% of the mix by 2040, with coal falling to 34%. The CPP would boost renewable’s share to 27%, while gas would increase to 29% and coal would fall to 26% (Figure). 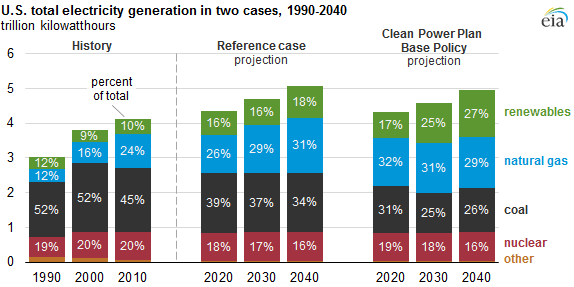 1. The Clean Power Plan is likely to give a big boost to renewable generation and gas, according to the Energy Information Administration (Source: EIA).

Nuclear would be largely unaffected by the CPP, shrinking slightly to 16% under both scenarios. However, the EIA considered another option under which new nuclear plants were treated the same as other carbon-free generation, something the industry is lobbying hard for. Under this scenario, nuclear capacity would grow from the current 105 GW to 121 GW in 2040, maintaining a 19% share through 2040 at the expense of slightly smaller growth in gas and renewables.