Dr. Steven Chu gave what was likely his last public speech as U.S. secretary of energy today on the last day of the ARPA-E Energy Innovation Summit. As usual for Chu presentations, it was a mix of data, vision, and humor. It fell to others to comment on the value and legacy of his service, especially to energy research and development.

As Chu spoke on both the second and third days of the annual gathering of technology researchers, corporate partners, and government agencies and labs, he didn’t dwell much on how central he has been to the creation of the Advanced Research Projects Agency-Energy (ARPA-E), but others were not so reticent. This morning, New York Mayor Michael Bloomberg quoted Chu as saying, “Always resist the urge to accept the status quo.” That sentiment is central to the mission of ARPA-E, whose motto is “Changing what’s possible.” And in introducing Chu later in the morning, Arun Majumdar, who served as the first director of ARPA-E, noted that the secretary was a member of the committee that produced the report Rising Above the Gathering Storm: Energizing and Employing America for a Brighter Economic Future, whose work led to the founding of ARPA-E.

In his presentation today, Chu noted, as he has in the past, that he has tried to bring to the Energy Department (and ARPA-E in particular) the culture that fostered 17 Nobel Prize winners at Bell Labs, where he first worked. That attitude of shared endeavor, collegiality, and “constructive confrontation”—regardless of one’s position in the organization—is something that many this week have commented on and praised, from Department of Energy (DOE) staff to award recipients, who have compared working with ARPA-E as significantly better than working with other DOE agencies in the past.

Among the issues he addressed in his talk today were the trajectory of technology development. Noting that in 1917 the U.S. had 127 automakers, in 1926 it had 43, and in 1947 it had 12, Chu pointed to failures, mergers, and other factors that all led to the drop in the number of automakers. “That’s part of technology development,” he said. Similarly, ARPA-E is funding multiple, carefully selected projects in several areas that are at very early stages of research, knowing that those projects may or may not lead to commercialization. However, it makes relatively small and short-term investments (and can pull the funds if milestones aren’t met) at a stage when private investors are not yet interested.

Chu also addressed climate change, looking at it with “a green eyeshades approach”—citing data from the insurer Munich Re that looks at the costs of claims from a changing climate. The goal of ARPA-E and the DOE, Chu said, has been to enhance innovation so that “alternatives” to current technologies are “better solutions” than the status quo.

When friends ask Chu if, knowing what he knows now, he would take the job of secretary, he answers, “Absolutely yes.” He said he has seen his most important role as one of “hiring the right people” (even to seven levels below him) and then “blocking and tackling” for them, especially when it required breaking through bureaucracy, so they could do their jobs.

That’s the managerial side of the position. The other obvious distinction Chu has had as energy secretary is that he is the first of 12 to hold the post who has been a scientist. The import of that can be seen in ways big and small, from his interest in hiring strong, qualified staff throughout the agency to his ability to engage with researchers in their own language while touring displays and presentations at the Technology Showcase yesterday (see photo). 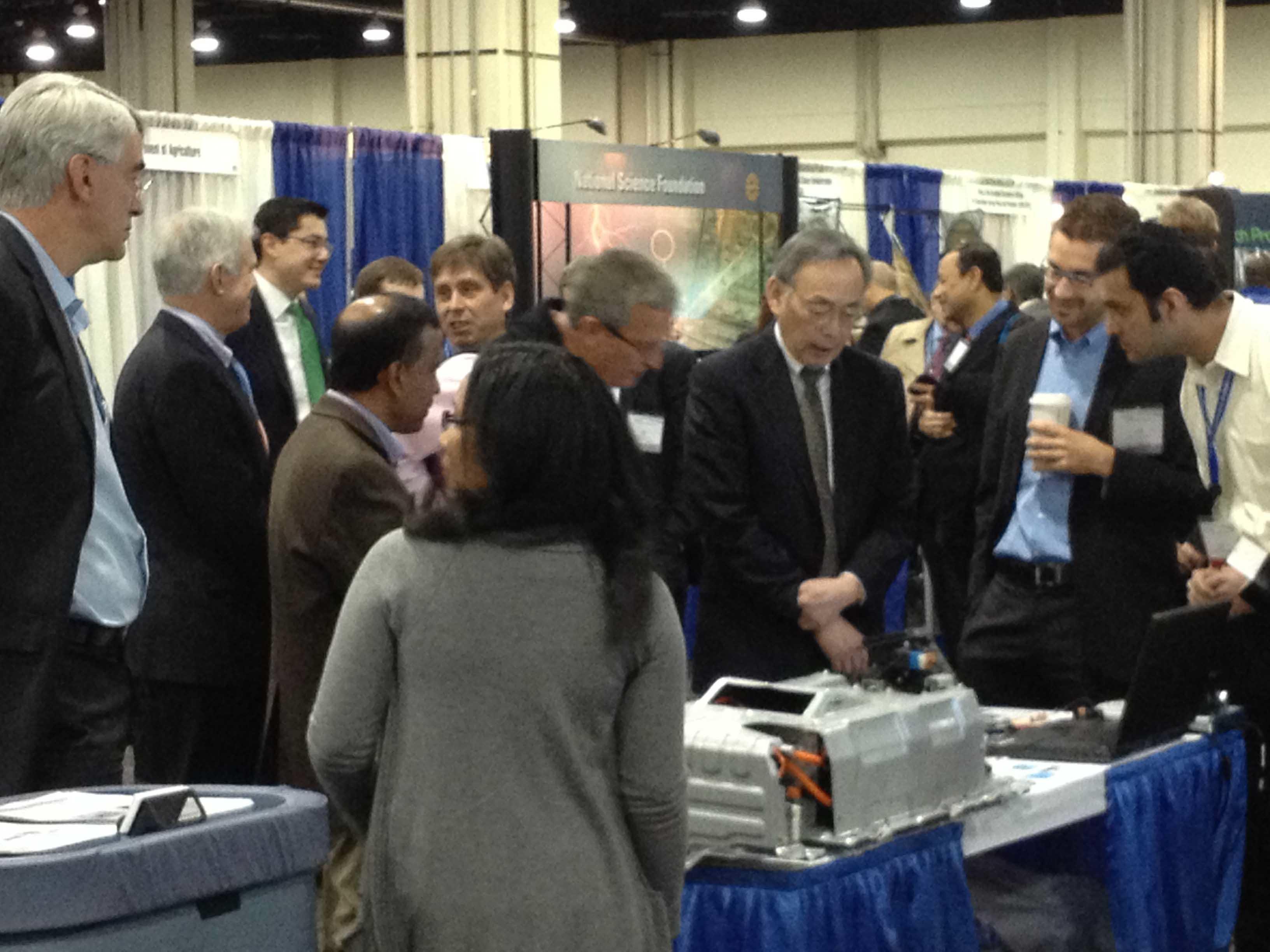 Naturally, the audience of current and potential awardees, partnering entities, and agency folks have benefited in various ways from Chu’s leadership, but it still was surprising when he received a standing ovation at the end of his presentation today. Maybe it had something to do with his sense of humor. Today, for example, his closing remarks included reference to a tongue-in-cheek story published in The Onion on Feb. 7 that featured a “photo” of Chu in bed with a solar photovoltaic panel. As he displayed the photo and some of the story’s text on the screens behind him, Chu couldn’t stop himself from breaking up in laughter over the story—and his response to it.

One four-year term in any position rarely changes the world, but judging by comments at this event, Secretary Chu has managed to reduce unnecessary red tape, spur creative thinking, take calculated risks, and hire for competency and drive—all while keeping his sense of humor.

This story was originally published on Feb. 27