Spain, the fifth-largest electricity market in the European Union, expects annual demand growth of about 3.5% over the next five years. At the same time, the country is committed to a 20% reduction in its CO2 emissions by 2012. Meanwhile, Spain’s 100% merchant power market means that producers need maximum flexibility from their plants.

In 2005, HC Energía—a combination natural gas and electric utility that became part of Portugal’s EDP Group the prior year—awarded Alstom a contract to build a 400-MW combined-cycle plant adjacent to the utility’s existing Castejon 1 unit.

An important requirement for HC Energía was operational flexibility—the ability to operate in baseload or part-load mode or intermittently, with fast start-up and shutdown times. Such flexibility is especially important in the region of Navarra, where Castejon is located. Navarra now has several wind farms whose intermittent output must be backed up by fossil-fueled capacity—but not by pure baseload plants, as is the case in the U.S. Spain uses combined-cycle plants in the region to take up the slack. Accordingly, they must be able to operate at partial load when a lot of wind power is being produced but also be capable of ramping up to full load quickly when wind speeds fall.

Castejon 2 (Figure 1) is powered by a single combined-cycle system that Alstom calls the KA26-1 because one of its two prime movers is the company’s GT26 gas turbine (GT). The other is an Alstom STF15c steam turbine—a floor-mounted, two-casing, reheat unit that shares a shaft with the gas turbine. 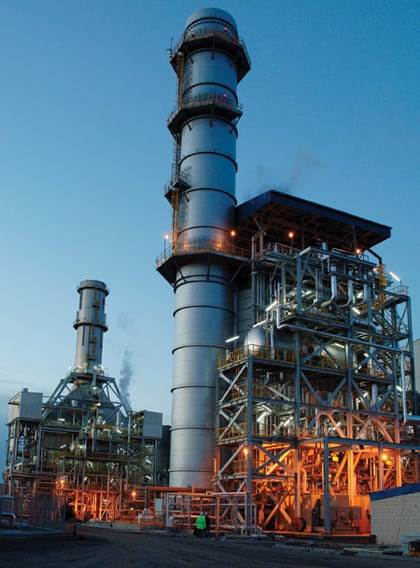 The third major subsystem of the KA26-1 is a heat-recovery steam generator (HRSG) that links the two turbines in a conventional way. Hot exhaust gases leaving the gas turbine at over 1,100F fire the HRSG, a triple-pressure, natural circulation unit with a horizontal internal arrangement.

However, it is the design of the GT-26 that makes the KA26-1 more fuel-efficient when it operates at less than full load. Each of the turbine’s two individually controlled combustor chambers has three variable guide vanes that can be manipulated to optimize the air flow through them for maximum efficiency and minimum emissions. Moving the vanes during low-load operation makes it possible to reduce air mass flow to 60% of the full-load level while maintaining the turbine’s exhaust temperature at the nominal level. Doing so ensures that the thermodynamic quality of overall combined-cycle combustion remains nearly constant. As a result, the system efficiency of the KA26-1 at 50% load, for example, is about 12% higher than that of a conventional combined-cycle power plant.

Castejon 2 uses the latest version of the GT26, which sports a higher power output and an improved operational range in part-load service. The KA26-1 has a net capacity of 424 MW and a net plant efficiency of 58.5% at ISO conditions.

The GT26 gives HC Energía fuel flexibility as well as operational flexibility. Normally, Castejon 2 runs on natural gas, but it can also automatically switch to oil—the backup fuel—if gas supplies are curtailed. The turbine can burn gas of various qualities, within certain parameters.

The shaft shared by the gas and steam turbines also drives Alstom’s hydrogen-cooled TOPGAS generator. During start-ups, the steam turbine is disconnected from the generator by activating a self-synchronizing clutch.

The final notable feature of Castejon 2’s design is an inlet fogging system that increases the GT26’s output by as much as 10 MW when ambient temperature is high and the plant requires additional cooling (Figure 2). 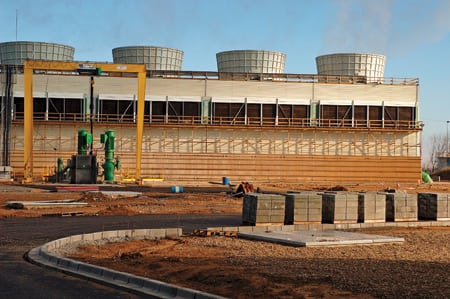 For operational flexibility, the KA26-1 combined-cycle system can be run at loads that are less than 40% of its maximum rating. This ability is important not just for backing up wind farms; given the system’s fuel efficiency, it also enables HC Energía to turn a profit from Castejon when market conditions reduce the need for regional generation (Figure 3). 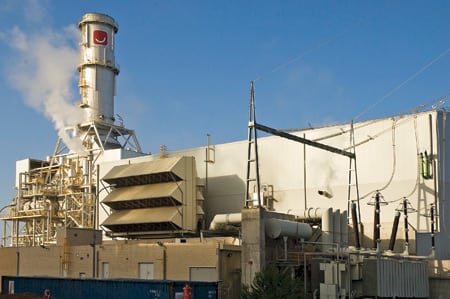 3. Works well with others. A key project requirement was excellent part-load performance, to facilitate the plant’s dispatching on a grid that seeks to maximize wind power production. Courtesy: Alstom Power

The KA26-1’s excellent part-load efficiency and operational flexibility also allow the utility to earn extra revenue by maximizing the time that Castejon spends feeding its full load into the local grid. For example, after an eight-hour shutdown, full-load operation can be resumed in less than one hour. From the low load point, full load can be reached in a matter of minutes.

Just as importantly, thanks to the GT26’s two combustion chambers, Castejon 2 meets or exceeds regional air emission standards, even at partial load. Commissioning tests produced values that are well below the required levels at 100% load for NOx (50 mg/m3), volatile organic compounds (2 ppmv), and CO (10 ppmv). At 70% load, CO emissions were 40 ppmv.

Alstom’s ability to design and build all of Castejon 2’s main systems in-house offered a number of advantages. The main one was the possibility of integrating the gas and steam turbines, the HRSG, and other key equipment in a way that maximizes the plant’s operational and fuel flexibility while minimizing its emissions.

Because it was Castejon 2’s engineering/procurement/construction (EPC) firm as well as its systems supplier, Alstom was also able to overcome other project challenges, such as reducing equipment lead time. This is the main benefit of the company’s “Plant Integrator” approach.

The main challenge for Castejon 2 was timely project completion, and it met that challenge in just 24.5 months. The schedule allowed for only week between signing of the EPC contract and awarding of the project’s notice to proceed. It also made no provision for a pre-engineering phase. Meeting the fast-track deadlines required Alstom engineers to think long and hard about constructability during the design phase. During that phase, several system designs were optimized with an eye to implementing and commissioning them easily and quickly.

For example, the HRSG chosen has a 10-module heat exchanger that usually requires a lot of piping work to be done on-site. To save time, Alstom prefabricated the 10 modules prior to delivering them to Castejon. Similarly, most control and electrical systems also were supplied as prefabricated modules that had only to be interconnected on-site. All gas turbine and steam turbine internal piping also was prefabricated to the maximum possible extent.

Another tenet of Alstom’s Plant Integrator approach is to tackle civil works—especially underground infrastructure—early. Doing so minimizes interference with construction and erection activities performed later in the project.

To save additional time and money, Alstom made several interfaces to the existing Castejon 1 plant. Those interfaces enabled the use of common systems (such as the balance-of-plant gas system and the raw water and wastewater systems) and made it possible to use medium-voltage boards for both plants (enabling separate panels to be used for each). In designing the interfaces, a key goal was to minimize the time that Castejon 1 had to be shut down while those interfaces were installed. In fact, all of the interfaces were implemented during a planned outage of the older plant, so there was no impact on its commercial operation.

Another important enabler of fast-track execution was a system-oriented approach to work that allowed the erection and commissioning of different systems at the same time. Safety was another focus of construction activities. The Castejon 2 project was completed while meeting all the demanding health and safety requirements of both HC Energía and Alstom, without any serious accidents during more than 1 million man-hours of work.

The new plant’s noise was yet another consideration. Alstom minimized it during the design phase by increasing the surface area of the Castejon 2’s air intake system and optimizing its air duct design.

Alstom signed the contract to build Castejon 2 on December 21, 2005, and the project’s notice to proceed was effective one week later. All main foundation work was completed 10 months following project kick-off, and all main structural steel was erected a month later.

Erection of the main equipment began 12 months after the notice to proceed. The first big piece of equipment to arrive on-site was the TOPGAS generator. It was followed by the GT26 gas turbine and then, one month later, the STF15c steam turbine.

Hoping for a repeat

During its first three years of commercial operation, Castejon 1 achieved 98% availability, on average. HC Energía has been quite satisfied with that figure—and with the plant’s great operational flexibility and start-up reliability.

HC Energía expects that Castejon 2 will perform just as well. Alstom believes that that is indeed possible, and not just because it has optimized the design and integration of the KA26-1 and its major subsystems. Indeed, the company will help determine whether Castejon 2 is successful by fulfilling its obligation under a separate contract to provide long-term O&M support to the plant.

—Peter Ladwein is the Castejon 2 project director for Alstom Power.