The convergence was too obvious to ignore. February 5, 2008, political Super Tuesday, saw voters in 24 states make their choices for Republican and Democratic nominees for president. Sen. John McCain of Arizona, given up for politically dead three months earlier, was triumphant on the Republican side. On the Democratic side, Sens. Hillary Clinton and Barack Obama found themselves virtually tied for the lead and headed for a long slog to a nomination.

Also on Tuesday, Feb. 5, some 500 folks assembled in a fancy hotel conference room a scant block from the U.S. Nuclear Regulatory Commission (NRC) in Rockville, Md., at the 4th annual Platts Nuclear Energy conference to discuss the future of nuclear power in the U.S. What’s the connection to the Super Bowl? Was the meeting’s kickoff on Super Tuesday a reminder that politics, probably more than engineering, will determine the fate of the alleged nuclear renaissance?

The Giants’ victory was a lesson that nothing in football, politics, or business—no matter how clear and obvious it appears—is certain. Entering the game, the Pats were masters of the universe, undefeated in 18 consecutive games, winner of three Super Bowls in the past seven years. The point spread favored the New Englanders by a dozen.

Several applications for the new, untested combined construction and operating licenses (COLs) are now docketed at the NRC, triggering a 42-month (that’s right, more than three years) review process. This is what passes for expedient regulatory action in our federal government. Bob Borchardt, who runs the NRC’s office for new reactors, told attendees at the Platts meeting that the agency has received five COL requests (not all of them complete), covering eight nuclear units.

Questions of economics, finance, and political feasibility dominated the conference. Players in the nuke arena converged in Maryland to discuss worthy issues such as how to maximize the opportunities of the NRC’s COL approach, how to manage new plant construction at existing operating plants, how to deal with the cost problems imposed by a global supply chain for commodities and services, and how to find and successfully exploit a new, inexperienced workforce.

But the main theme of the meeting was inevitably political, in this most political of years. On the minds of many utility resource planners at the conference: how to get a nuclear generation project financed and concrete poured, given the ticking policy time bomb of the November 2008 election and the installation of a new president of whatever political persuasion. Even a president friendly to nuclear power will have to learn the issues, appoint new people, and endure a transition of several months. All of that will mean delay—and time, it is said, is money.

The clock is ticking

For the nuclear industry, the key to the time game is implementing construction loan guarantees authorized in the now holy writ of the Energy Policy Act of 2005. Without the full faith and credit of the U.S. government behind the loans, lenders likely will seek usurious interest rates on the debt. “Loan guarantees,” said Michael Wallace, a Constellation Energy executive vice president, “are most critical.” Baltimore-based Constellation has plans for a new unit at the existing Calvert Cliffs site in southern Maryland (Figure 1). Constellation owns two nuclear units at Calvert Cliffs that bid power into the PJM competitive wholesale market. PPL’s Miller said, “Without loan guarantees, we are out” of the market for new nuclear generation. PPL, based in Allentown, Pa., owns a single merchant nuclear plant that bids into PJM. 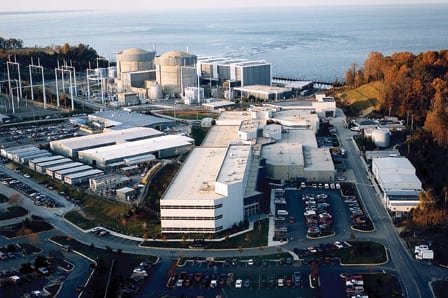 UniStar Nuclear Energy and Constellation Energy remain committed to the future of nuclear power, as evidenced by a February announcement of their intention to apply for a COL for an addition to their Nine Mile Point nuclear plant in upstate New York. UniStar is also working with PPL and Ameren UE to develop COL applications for new reactors in Pennsylvania and Missouri, respectively; it’s working with newly formed Amarillo Power to pursue a new reactor in Texas.

Ken Hughey of Entergy Corp., which is currently trying to spin off its merchant nuclear operations into a separate, publicly traded company, noted that his company’s plans for new nuclear units at the existing Grand Gulf site in Mississippi (Figure 2) and at River Bend in Louisiana, are for state-regulated plants. He said that loan guarantees are “very useful” for regulated plants but essential for merchant plants, which Entergy operates in several states. 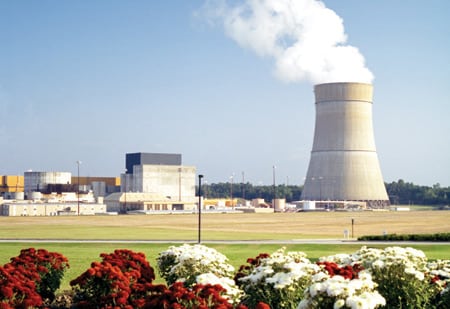 2. Intelligent investment. The NRC awarded Southern Nuclear an early site permit (ESP) for the Grand Gulf Nuclear Station near Port Gibson, Miss., in April 2007. An ESP allows a utility to “bank” a site for up to 20 years for future reactor placement. Courtesy: Southern Nuclear

Last December, Congress authorized $18.5 billion in loan guarantees for nuclear power plants and $2 billion for uranium enrichment projects. According to Constellation’s Wallace, that amount is adequate for three or four projects to go forward.

The nuclear industry is playing “beat the clock” with the loan guarantees. If the guarantees don’t materialize before a new administration marches into Washington, several speakers told the Platts conference, the nuclear renaissance could become the Dark Ages. The repeated message was that the Department of Energy must get out a solicitation for the loan guarantees within a matter of weeks to be sure that an incoming administration of either party can’t put a hold on them.

Wallace explained the way the timing works for his company’s nuclear plans. Once the DOE puts out the solicitation, it will take Constellation about three months to produce the preliminary letter; that means May. He said it will take another four months to put the loan guarantee in place, which brings them very close to election day on November 4. Wallace said he wants to have his board of directors approve the final decision to move forward to construction, loan guarantee in hand, in early November.

The nuclear industry fears that the DOE won’t get loan guarantees in place before a new administration comes into power in early January 2009. But the timing is even more difficult. The ball game changes entirely immediately after the presidential election. In reality, the new administration will rule Washington the day after the election, as even holdover administrators won’t take action until the new regime moves into office. The industry’s worst fear is that the Democrats will win the White House and expand the Democratic majorities in the House and Senate.

So the Platts conference attendees looked forward with great anticipation to the remarks of Dennis Spurgeon, assistant energy secretary for nuclear energy in the Bush administration. Many in the audience believed that Spurgeon would announce an imminent offering of the solicitation for loan guarantees.

That didn’t happen. Spurgeon spoke barely a word on the subject. His anodyne address was mostly about the administration’s Global Nuclear Energy Program (see "Developing the next generation of reactors") to close the nuclear fuel cycle by resurrecting spent fuel reprocessing and fast reactors—a technology strategy that has repeatedly failed in the U.S., Japan, and Europe. Many in the audience yawned. Others rolled their eyes in disbelief.

Questioned after his remarks, Spurgeon did a classic bureaucratic duck. He’d like to issue the solicitation as soon as he could, said Spurgeon. But he said he isn’t free to do that on his own. He must consult with the White House and Congress, and get a sign-off. It’s a case of “Captain, may I?” he said.

Hopes for a nuclear renaissance are based on the assumption that new nukes make economic sense. That isn’t clear, even with federal kick-starts. For example, at the end of January, MidAmerican Energy Holdings said it has lost interest in building a new nuclear plant in eastern Idaho.

The Omaha-based company, owned by billionaire investor Warren Buffett, said the Idaho plant would cost too much. Buffett would have financed the project, using his stellar credit rating, but he decided the financial risk had become unbearable. According to Nucleonics Week, MidAmerican was looking at a Mitsubishi 1,700-MW advanced pressurized water reactor for the site but recoiled at the hefty capital costs for the plant, which could exceed $3,000/kW.

The same figure of $3,000/kW of capacity repeatedly came up at the Platts meeting, with some noting that costs are climbing rapidly, particularly for steel. Constellation has said its estimate for the Calvert Cliffs addition is about $3,000/kW, but it also acknowledged that the figure is two or three years old.

The announcement by MidAmerican prompted the anti-nuclear group Nuclear Information and Resource Service (NIRS) to comment: “If Warren Buffet cannot figure out how to make money from a new nuclear reactor, who can?” NIRS noted, “Even before any new nuclear construction has begun in the U.S., cost estimates have skyrocketed and are now 300-400% higher than the industry was saying just two or three years ago.”

Another report from the trenches of the nuclear renaissance came in late January from South Carolina Electric & Gas (SCE&G), which cited rising costs as the reason for putting on hold its plans to apply for a COL for two Westinghouse AP1000 units at its Summer site (Figure 3). Nucleonics Week said SCE&G began backing away from its COL plans last year. A source told the Platts newsletter that the utility might “still pursue a COL, which could be ‘banked’ and used in the future.” 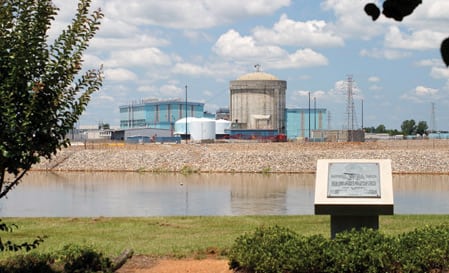 John Reed of Concentric Energy Advisors told an SNL EXNET symposium early this year that the realistic cost of a new 2,200-MW nuclear plant would be $5,500 to $8,000/kW, for a total cost of $12 billion to $18 billion.

An article at SNL Interactive in early February commented, “One problem with the excitement around the nuclear renaissance in the power industry is that, in reality, the revival is quite slow.”