By the end of this year, energy-related carbon dioxide (CO2) emissions from natural gas could surpass emissions from coal for the first time in nearly 45 years, according to projections by the Energy Information Administration (EIA).

The EIA’s latest Short-Term Energy Outlook notes that consumption of natural gas in the U.S. between 1990 and 2005 was relatively similar, but their emissions were different. “The consumption of natural gas results in about 52 million metric tons of CO2 for every quadrillion British thermal units (MMmtCO2/quad Btu), while coal’s carbon intensity is about 95 MMmtCO2/quad Btu, or about 82% higher than natural gas’s carbon intensity,” the agency explained in an August 17 briefing.

“Because coal has a higher carbon intensity, even in a year when consumption of coal and natural gas were nearly equal, such as 2005, energy-related CO2 emissions from coal were about 84% higher than those from natural gas.”

But in 2015, consumption of natural gas was 81% higher than coal consumption. Their energy-related CO2 emissions were nearly alike, both releasing about 1.5 billion metric tons.

This year, energy-related CO2 emissions from natural gas will be 10% greater than those from coal, it said.

The agency also noted that annual carbon intensity rates in the U.S. have been falling since 2005. One contributing factor is the increased consumption of low- or zero-carbon electricity from nuclear plants and renewables. “Although use of natural gas and petroleum have increased in recent years, the decline in coal consumption and increase in non-fossil fuel consumption have lowered U.S. total carbon intensity from 60 MMmtCO2/quad Btu in 2005 to 54 MMmtCO2/quad Btu in 2015,” the EIA said.

According to the EIA’s report, electricity generated by U.S. natural gas–fired power plants surged to a record 4.95 GWh per day in July, which is nearly 9% higher than a previous record set in July 2015. 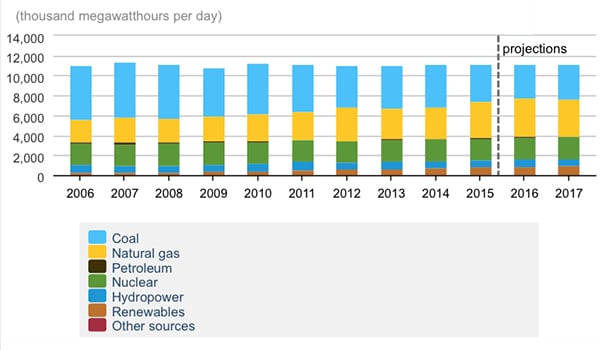