Siemens Power Generation (Erlangen, Germany) announced late last year that it had acquired wind turbine manufacturer Bonus Energy A/S (Brande, Denmark). With a market share of about 9%, Bonus was one of the top five manufacturers of wind turbines in 2004.

On paper, Siemens now seems well-positioned to challenge the market leaders (GE Wind, Vestas, and Gamesa) for a larger piece of the rapidly growing wind turbine pie. The company certainly has high expectations. According to Klaus Voges, president of Siemens Power Generation, "The sales posted by our new Wind Power Division are earmarked to rise at a significantly higher rate than the world market for wind energy systems, which grows at an annual rate of 10%." Over the next five years, Siemens hopes to more than double its sales in the wind sector by focusing broadly on Europe, the U.S., India, and China.

Why did Siemens buy Bonus? Well, for starters, Bonus has an installed base of 3,321 MW in 20 countries and shipped 383 new wind turbines (Figure 4) in 2003. Although it’s hardly the largest turbine manufacturer, Bonus does have a reputation for excellence. "[Siemens’] rationale seems pretty straightforward," explained Godfrey Chua, research director of Emerging Energy Research (Cambridge, Mass.). "Wind power has matured to the point where it is now an increasingly necessary component of utilities’ generation portfolios, and it is one of the chief growth segments of the power equipment business." Bonus, while offering a range of turbines rated from 600 kW to 2.3 MW, also is building larger turbines for use in the offshore market, which many industry insiders say has great potential over the next decade. 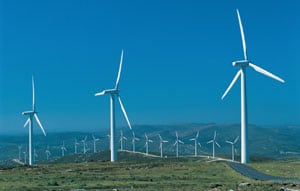 With Bonus’ expertise in turbine manufacturing and Siemens’ expertise in project management, the marriage should help Siemens compete strongly, especially in Europe. If nothing else, the merger will have a positive impact on the sector by driving prices down. The challenge for Siemens now is to quickly integrate Bonus’ business so that it can take advantage of the boom in demand for wind turbines created by the renewal of the Renewable Energy Production Tax Credit in the U.S.