GE Renewable Energy’s Haliade-X 12 MW offshore wind prototype—one of the largest in the world—is slated to be installed and tested in the Netherlands this summer. The project could help commercialize the wind turbine model by 2021.

The prototype will be installed onshore at the Port of Rotterdam in Maasvlakte-Rotterdam to facilitate access for testing. The company unveiled the project on Jan. 16 as it announced an agreement with Future Wind, a joint venture between Dutch renewable energy consultancy firm Pondera Development and steel tubular manufacturer SIF Holding Netherlands.

“The deal includes five years of testing and a 15-year full service Operation and Maintenance agreement,” GE said. “During the initial period of operations, it will allow GE Renewable Energy to collect data needed to obtain a Type Certificate, a key step in commercializing the product in 2021.”

This prototype in Rotterdam is part of GE’s $400 million (€320 million) investment in the offshore wind market to spur development and deployment of Haliade-X over the next three to five years. That initiative, announced in March 2018, “could to help reduce offshore wind’s cost of energy in order to make it a more competitive source of clean, renewable energy,” GE said.

Haliade-X features a 220-meter rotor and a 107-meter blade designed by GE subsidiary LM Wind Power. The turbine design also includes digital capabilities. GE says the wind turbine model features a 63% capacity factor—which is “five to seven points above the industry standard.” For GE, scaling up is important. “Each incremental point in capacity factor represents around $7 million in revenue for our customers over the life of a wind farm,” it noted.

One 12-MW Haliade-X  turbine is designed to generate 67 GWh annually, a feat achieved by the combination of a bigger rotor, longer blades, and the higher capacity factor, which make the model less sensitive to wind speed variations, GE said. “While the Haliade-X 12 MW sea turbine is well-suited for high-to-medium wind speed environments, its larger capacity can produce energy even at lower wind speeds, increasing profits and dramatically lowering the levelized cost of energy,” the company added. Company documents suggest that the turbine could be installed in a 750-MW wind farm configuration.

Also on Wednesday, Siemens Gamesa Renewable Energy (SGRE) launched the SG 10.0-193 DD, a direct-drive generator turbine, which it said is the “company’s first 10+ MW offshore wind turbine.” SGRE expects to install a prototype of the new model later this year, aiming for commercial market deployment in 2022.

According to the company, the 10-MW turbine rating was achieved through a larger generator diameter. “By increasing the rotor diameter to 193 meters, this new wind turbine offers up to 30% more [annual energy production” than its predecessor, the SG 8.0-167 DD. Its 94-meter-long-blades provide a swept area of 29,300 m2. Each blade is almost the same length as one soccer field.”

SGRE, which leads the fiercely competitive global offshore wind turbine market, has installed 3,100 turbines worldwide. It said development of the newly launched SG 10.0-193 DD was necessary as the levelized cost of energy continues to fall. “New markets are developing across the globe, all of which require cost-efficient, reliable, and clean power for generations,” said Andreas Nauen, CEO of the SGRE Offshore Business Unit.

According to the International Renewable Energy Agency (IRENA), offshore wind turbines deployed around the world today typically have a rated capacity of about 6 MW, with rotor diameters of 150 meters. However, the international agency noted in a report last September that wind farms with the largest commercial available wind turbine—MHI Vesta’s 9.5-MW V164, which features 164-meter diameter blades—will be installed from 2019 onwards.

In late November, offshore wind development company Vineyard Wind announced it name MHI Vestas as its preferred supplier for a 800-MW wind farm proposed in federal waters south of Martha’s Vineyard. Construction of the project, which will include 84 V164-9.5 turbines, is slated to kick off this year if it obtains required permitting, and begin operations by 2021, if it obtains long-term contracts with Massachusetts’ electric distribution companies. 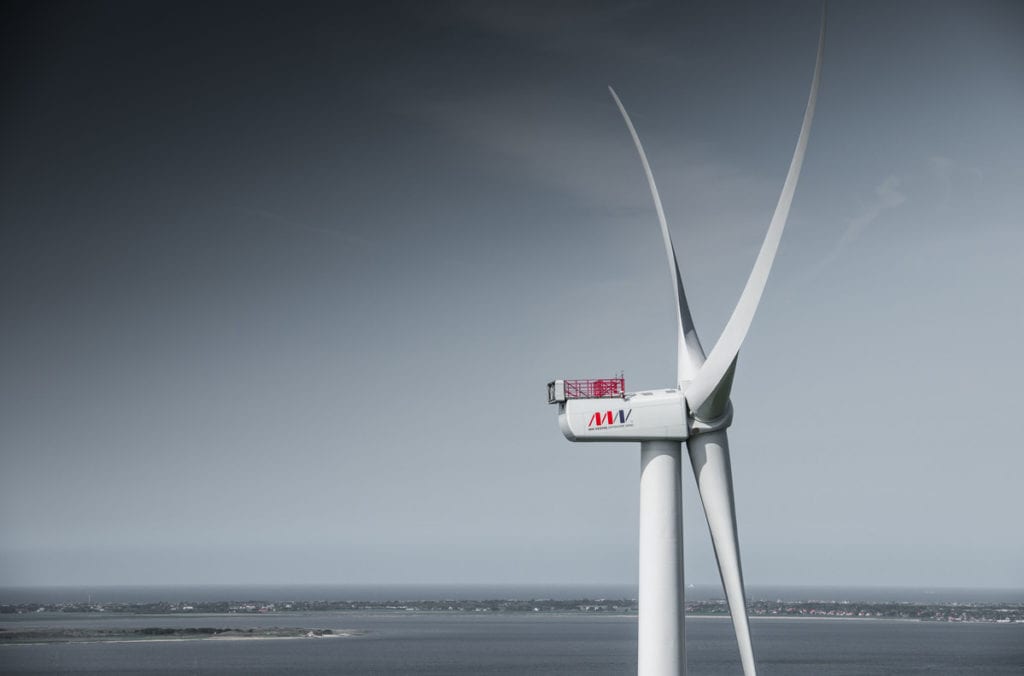 On Jan. 11, MHI Vestas Offshore Wind, a firm that makes the V164-9.5 MW turbine, announced it chose Boston, Massachusetts, for its U.S. headquarters, a move that suggests a strategy to expand in the developing U.S. offshore market. Massachusetts has called for 1,600 MW of new offshore wind capacity by 2027. Courtesy: MHI Vestas.

IRENA noted that installed costs for commissioned offshore wind projects began to tumble around 2013, as the industry matured, project developers became more experienced, and larger turbines are installed. “Larger turbines help to amortise installation and foundation costs, while larger projects also have proportionately lower project development costs. At the same time developer experience has streamlined and optimised wind farm project development and design, reducing costs and lead times. Greater economies of scale in supply chains, as well as competition, have reduced costs across the board,” it noted.

The main cost components of offshore wind farms are the turbines (including towers), the foundations, and the grid connection to shore, IRENA said. Recent agency estimates suggest the turbine represents the largest cost component, accounting for around 45% of the total installed cost. In 2016, the average installed cost for a European offshore wind farm was $4,697/kW.