In 1957, legendary Calypso singer and civil rights activist Harry Bellefonte recorded “Jamaica Farewell,” which became a major hit in the U.S. The song’s chorus: “Sad to say, I’m on my way, won’t be back for many a day.”

That looks like the theme song for nuclear power in the U.S. (and perhaps Western Europe as well). With the bankruptcy of Westinghouse and the pending dismemberment of its Japanese parent Toshiba, two ongoing – and way behind schedule and over budget – U.S. nuclear projects are in deep jeopardy.

On top of that, the near completion of a Finnish reactor, designed and built by France’s tottering, state-owned Areva nuclear firm, has likely lit a red light to anyone seeking to build a new nuke in Europe. Areva may disappear.

In the U.S., Georgia-based Southern Co. has taken over construction of the two-unit Vogtle plant, featuring Westinghouse’s hyped 1,117-MW AP1000 advanced reactor design, following Westinghouse’s March bankruptcy filing. Years behind schedule and billions over budget, it isn’t clear that the project will ever be finished. In any case, Georgia Power’s customers will pay for the mismanagement of the project. Post mortems will focus on many reasons for the project’s problems, including the hubristic utility and the credulous role of the Georgia Public Service Commission. 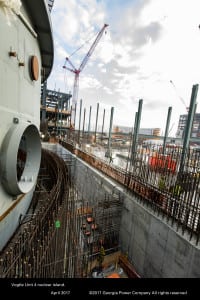 Looking at the Vogtle fiasco, the Atlanta Journal-Constitution newspaper commented, “Southern Company’s chief executive has said more than once that the giant utility’s project to build two more nuclear reactors at Plant Vogtle would be history making. He may be right but not in the way he meant.” The newspaper said Vogtle “is fast becoming Exhibit A for why no U.S. utility before Atlanta-based Southern had tried building a new reactor in 30-plus years.”

In neighboring South Carolina, SCANA Corp. and public power system Santee Cooper are facing a similar situation. They bought two Westinghouse AP1000 units to add to their existing, two-unit V.C. Summer nuclear station, and are also way off schedule and over budget. SCANA has a deal with Westinghouse to come up with a new approach to construction by the end of June.

My guess – and it’s just that, based on my reading of U.S. nuclear history – is that both Vogtle and Summer eventually will crater. While both utilities enjoy supine state regulators and the ability to earn on construction costs as they are incurred, that will trigger rate shock and political backlash, killing the projects. That’s what we saw in the 1980s.

Also in the U.S., North Carolina utility regulators are directing sharp questions at Duke Energy for expenditures in its stalled two-unit, AP1000 project in South Carolina, which has a combined construction and operating license from the U.S. Nuclear Regulatory Commission. The utility has not moved forward on construction.

The N.C. Utilities Commission on May 16 gave Duke 60 days to respond to a series of questions about its plans for the project, including the impact of the Westinghouse bankruptcy. In 2008, Duke produced an estimate of $14 billion to build the project. Duke is unlikely to proceed with the Lee units, upon which it has already spent over $500 million.

Then there is Europe, where the Finnish utility TVO’s Olkiluoto-3 plant appears to be nearly complete, more than 15 years after France’s Areva began construction of its next-generation pressurized water reactor design. The original cost estimate for the 1,600-MW unit was $3.6 billion. It now stands at $10 billion and growing. Construction began in 2005, with completion targeted for 2009. It now looks like completion will be in late 2018.

“If the nuclear industry wants to have a future it cannot afford more projects like this,” said Pekka Lundmark, CEO of Fortum, a Finnish company that owns 26% of utility TVO.