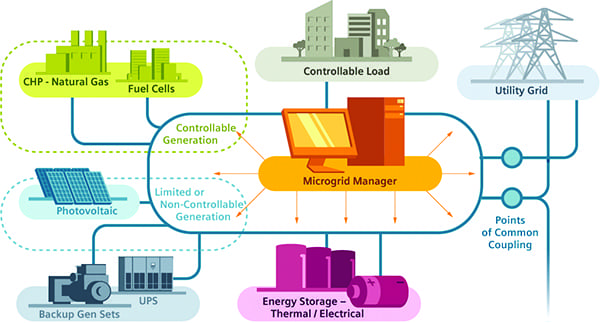 Six of the 10 most-destructive wildfires in California’s history have occurred over the past two years, and the state’s aging electrical infrastructure is a big part of the problem. According to a report from Gov. Newsom’s Strike Force, equipment owned by California’s three largest investor-owned utilities has ignited more than 2,000 fires (about 1.5 fires per day) over the last 3.5 years.

As the 2019 wildfire season begins, the state is under mounting pressure to mitigate this crisis. State officials and utility companies have proposed measures to improve electric grid safety, but problematically, the majority of these measures will take years to implement. In the short term, there is only one realistic strategy that utilities can adopt in order to protect Californians from catastrophic wildfire: utilities have to turn off the electric grid.

That is currently the plan. According to Bloomberg, Pacific Gas & Electric is planning to deenergize the grid as many as 15 times this coming wildfire season in high threat areas, with the average outage duration ranging from two to five days. This means that for the foreseeable future, California will have the least reliable electric grid in the U.S. by a significant margin. This situation represents a massive risk for California’s economy, and more importantly to its citizens.

To their credit, many state officials and utilities have been working hard on solutions for years. Problematically, the state has more than 250,000 miles of overhead power lines running through a territory with 149 million dead trees. A quick fix simply does not exist; for many Californian’s, long duration power outages are simply part of the “new normal.”

As there is no feasible path to preventing deenergization events in the short term, the state must therefore endeavor to minimize the associated damage. Namely, this will require the state overseeing a mass deployment of distributed energy resources (DERs) to ensure that—at a minimum—mission-critical facilities, community centers, and high-risk residences have access to backup power during public safety power shutoff events. On this point, there appears to be broad consensus amongst policy makers and regulators.

Unfortunately, far too little attention is being paid to how backup power requirements will be met. At present, the primary approach under consideration is a large-scale deployment of diesel generators across the state. While there are some advantages to this approach, primarily that diesel generators represent the simplest short-term solution, there are several obvious reasons that Californians should find this plan problematic.

First, diesel fuel is one of the dirtiest forms of electricity generation in the U.S. In addition to being entirely inconsistent with California’s broader environmental agenda, it is hard to overstate the hypocrisy of attempting to solve a climate-driven crisis by drastically increasing the state’s emissions footprint during deenergization events.

Second, the effectiveness of this approach is entirely dependent on the availability of diesel fuel. While diesel fuel is widely available on normal days, it is extremely difficult for most customers to procure during widespread regional power outages. As the vast majority of diesel generators have short duration storage tanks, operators will need to be prepared to refuel multiple times during the average public safety power shutoff. The feasibility of ensuring customers have reliable access to diesel fuel under these circumstances has not been considered in nearly enough detail at the state level.

California is on the precipice of an unprecedented energy crisis that will have far-reaching ramifications on both local and national economies, not to mention the safety of its residents and the longevity of the state’s infrastructure. While there are no easy answers, the state’s current proposed solution is centered around the large-scale deployment of diesel technology despite the existence of practical, clean, and more cost-effective alternatives. Why?

—Tim Hade is COO and co-founder of Scale Microgrid Solutions.