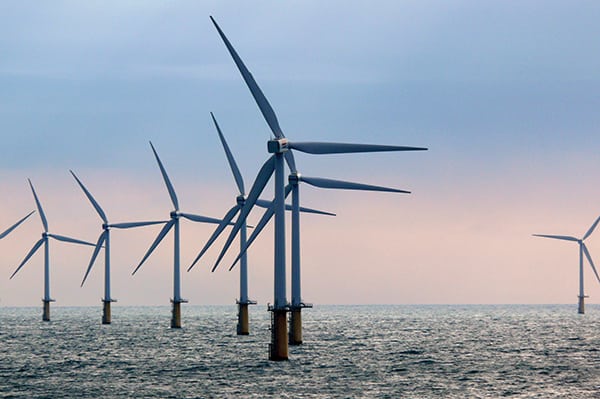 Europe has been in the forefront of renewable energy development, and though the scientific research on wildlife impacts is limited, European environmentalists and developers are beginning to create baseline frameworks and guidelines. Developers around the world can learn from their experience.

As more renewable energy systems come online, providers hope to both make money and protect the environment simultaneously. However, some environmental scientists and conservationists are sounding alarm bells over impacts that onshore and offshore wind farms and new wave and tidal energy systems may have on avian and marine wildlife—in particular, birds, bats, whales, dolphins, and other sea mammals.

There is empirical evidence that onshore wind production has negative impacts on birds and bats (see the article “Weighing the Environmental Impacts of Wind and Solar” in this issue). But a bigger unknown is how increasing numbers of offshore wind developments will affect marine as well as bird populations. Europe leads the world in offshore wind development, and plans are under way to continue to ramp up. Including offshore production, Europe’s installed wind capacity could surpass 200 GW by 2020. Indeed, worldwide, wind energy of all forms is, well, blowing up. Though unquestionably renewables are better for the environment than fossil-fueled power plants, the enduring struggle between economics and stewardship is still part of the equation.

For maximum output and profitability, wind farms are sited in open, exposed areas where there are higher-than-average wind speeds. This means that they are frequently proposed in upland and coastal areas, potentially affecting important habitats for breeding, wintering, and migrating birds. In the same way turbines utilize the kinetic energy of the wind, birds often use that wind as their propellant or even as “superhighways.” The degree to which wind farms can safely co-exist with avian life is still an unknown, especially as ever-larger wind turbines on- and offshore are deployed.

Additionally, as humans keep developing coastal, tidal, and deep ocean regions, the noises created during exploration and development processes become highly amplified in the undersea environment. Many species of marine life, particularly mammals, depend heavily on sonar-like systems to navigate, and those systems are greatly affected by the sounds created during undersea energy development and construction. In much the same way that dolphins, porpoises, and whales have been affected by undersea oil exploration, they are getting hit again as both offshore wind, tidal, and other marine renewable energy systems expand (see sidebar).

But precisely because most of these energy systems are new, the extent of their actual impacts is still relatively unknown. Without much of an established body of peer-reviewed scientific research, environmentalists and developers are just now creating baseline study frameworks and guidelines for future projects. Given Europe’s longer history with renewable rollouts, a large portion of the published research emanates from there. What are some lessons that have been learned, and what can renewable energy providers elsewhere do to avoid the worst mistakes of their pioneering predecessors?

Wind Turbines Can Be Bird and Bat Killers

As one might expect, most of the impacts of wind infrastructure are not due to direct clearing of land or habitat loss but to bird and bat collisions. Birds can be killed not only from collisions with rotors but also by colliding with towers, nacelles, and associated structures such as guy cables, power lines, and meteorological masts. Estimates of bird and bat collisions vary from site to site, depending on the location, the technology used, and the abundance of birds locally. Some studies suggest that birds may be killed at a rate of between three to five individuals per MW per year, while bat collisions at some sites are as common as 30 per MW per year.

Recent research suggests that newer-generation turbines sited with appropriate planning generally pose lower risks. However, comparisons between sites are difficult because different sites have distinct avian populations, and species composition and behavior can affect the risks. In other words, planners and site developers have to be careful not to over-generalize. Each site requires its own specific analysis.

The consensus among European experts is that the best solution for energy developers as they seek to avoid wildlife impacts is likely improved site selection, as the international avian conservation group BirdLife reported in one of its recent studies, “Meeting Europe’s Renewable Energy Targets in Harmony With Nature”.

According to the BirdLife report, a useful approach is mapping wind resources (such as speeds and patterns) together with maps of environmentally sensitive zones, such as migration corridors and protected wildlife areas. Doing so can create a practical tool for development decisions based on the most extensive and up-to-date data. These can also be useful for policy making and planning.

Robust and objective baseline studies are also necessary as part of this process to minimize negative effects on birds, other wildlife, and their habitats. They also support post-construction monitoring at completed wind farms where environmental concerns exist. BirdLife and the European Commission studies state that, where at all possible, energy providers should not develop in areas with:

■ “High densities of wintering or migratory waterfowl and waders, where important habitats might be affected by disturbance, or where there is potential for significant collision mortality.”

■ “[A] high level of raptor activity, especially core areas of individual breeding ranges and in cases where local topography focuses flight activity, which would cause a large number of flights to pass through the wind farm.”

■ “Breeding, wintering or migrating populations of less abundant species, particularly those of conservation concern, which may be sensitive to increased mortality as a result of collision or more subtle effects on survival and productivity due to displacement.”

When developers build their turbines, BirdLife and the European Commission suggest they:

■ “Developers should mark overhead cables using deflectors and avoid their use over areas of high bird concentrations, especially for species vulnerable to collision.”

Another suggestion BirdLife has is that wind producers halt turbine operations “during peak periods of activity or during migration,” even though that means taking a potential hit on income.

After the turbines have been sited, among the best solutions to avoid accidental avian deaths is the installation and usage of bird- and bat-sensitive radar systems. Several international manufacturers now provide systems with supporting software that can be used to scan the sky for large groups of birds and bats and automatically shut down turbines before flocks pass through generation areas. For older wind farms that have been sited along migratory routes, this could prevent bird formations from “sleep-flying” directly into harm’s way.

Additional operational adjustments such as changing the cut-in speed or the angle of blades relative to the wind may also reduce collisions. However, somewhat counterintuitively, for birds with poor maneuverability such as griffon vultures, it may be that slower rotation speeds are more problematic because the associated low wind speed makes avoidance of the turbine blades more difficult. On the other hand, according to the European Commission report, data from several studies suggest that bat collisions are halved when turbine cut-in speed is increased by 1.5 meters per second above the manufacturer’s speed. “This may be because bats are more active at lower wind speeds” since the insects they feed on do not fly in high winds.

Because of its location in marine environments, offshore wind development brings with it another set of environmental impacts. Turbine foundation construction and undersea cable installations, as well as other steps in the construction of high-capacity wind farms, can generate high levels of noise (Figure 2). The impact of noise on marine mammals can be divided into three levels: those that cause fatal injury; those that cause non-fatal injury such as deafness and other auditory damage such as “temporary threshold shift”; and those that cause behavioral change (such as avoidance and cessation of feeding).

The focus should not solely be on avoiding deaths, however. “A porpoise is doomed to die if its hearing is shattered,” Kim Detloff, a marine expert at German nature conservation group NABU told Renewable Energy World in a 2012 story. In Germany, comprehensive noise control measures must be used during the construction phase, especially when foundation structures are driven into the seafloor. This is necessary to protect porpoises, which are sensitive to noise and protected by animal conservation laws, as well as other marine mammals. Regulators “must sanction developers if they repeatedly violate the noise limit,” said Detloff.

While data demonstrate that construction will have effects on mammals and fish, which can detect pile-driving noises over considerable distances, there are very few equivalent data available for birds. Adequate avian ecological survey data is generally still unavailable for most offshore areas, according to BirdLife. In order to remedy this, they recommend, prior to development, year-round baseline data collection over a minimum of two years for all affected bird species to cover breeding and non-breeding distributions.

Environmental best practices often trail development, only evolving as real impacts are actually felt. Beginning several years ago, as German energy provider RWE AG began construction of its massive Nordsee offshore wind farm complex, the firm shifted to using technologies that reduced noise from driving turbines into the seabed after conservation groups complained about impacts on porpoises. RWE’s Nordsee Ost wind farm, which has a capacity of approximately 295 MW, is one of the largest commercial wind farm projects off the German coast. A total of 48 Senvion wind turbines, each with a capacity of 6 MW, were initially installed. Currently the company is jointly developing the next phase, the Nordsee One project. With 54 more wind turbines, Nordsee One will have an overall capacity of 332 MW.

Recent news releases from RWE state that the foundations for Nordsee One’s wind turbines and the substation were recently completed. The installation of the facility’s main submarine cable is scheduled to begin in June. The transformer substation at sea is also slated to be installed during the summer. Finally, the wind turbines are due to be installed in early 2017, and the wind farm will then go into operation next year.

According to other published reports, during the initial construction phase, RWE used a large perforated hose to produce a curtain of air bubbles around each of the first 48 turbine foundations at Nordsee Ost. RWE has also undertaken many onshore and offshore ecological surveys to identify the location of habitats and species of all the affected marine and avian life that could be impacted by the development. Extensive boat and aerial surveys collected two years’ worth of data on bird activity offshore.

“We have also completed one year of marine mammal surveys using a combination of survey techniques,” RWE said in a statement. “We have also collected over 10,000 hours of continuous acoustic monitoring for marine mammals from static moorings. In addition, we have completed surveys for fish and other marine species which live on, or within, the seabed.” The survey data will be used in conjunction with other existing data to establish the ecology of the area.

No doubt, as development proceeds, many more lessons will be learned as new regulations are phased in. Now as the U.S. begins development of its first large offshore wind farm, operators in conjunction with their Dutch partners have announced their intent to draw on lessons learned throughout the North Sea.