New Jersey’s gaming mecca is hosting one of the largest hybrid (solar-wind) power plants in the world (Figure 3). The Jersey-Atlantic Wind Farm, with 7.5 MW of wind capacity and 0.5 MW from photovoltaic (PV) cells, is expected to generate 20,000 MWh annually. That should be enough to power an adjacent wastewater treatment plant operated by Atlantic County Utilities Authority (ACUA) and 2,500 homes as well. ACUA dedicated the facility in December, and it is nearly finished. To track the final stages of the project, visit www.njwind.com/webcam.html. 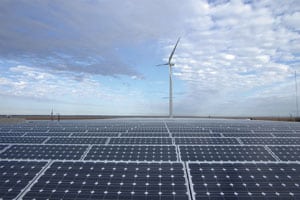 3. Doubly renewable. Atlantic City, N.J., is now home to one of the world’s largest (8-MW) wind-photovoltaic power plants. It is one of the few coastal wind farms anywhere.

The wind farm is owned by Jersey-Atlantic Wind LLC, a joint venture of Babcock & Brown (an Australian investment firm), Central Hudson Energy Group Inc. (a New York utility), and Community Energy Inc. Community Energy (Wayne, Pa.) is also the project’s developer. A spokesman for Community Energy said that hundreds of commercial and residential electric customers in the Garden State have already signed up for power from the wind farm, which is unusual for its siting on a seacoast.

The wind portion of the plant is powered by five 1.5-MW GE wind turbines. Each turbine stands 380 feet tall, blending in nicely with Atlantic City’s casinos. According to GE, more than 3,300 identical units are in use worldwide. The turbines’ power and torque are actively controlled by blade pitch and yaw. The units’ bedplate drive train design, which enables all nacelle components to be joined on a common structure, is said to improve durability. Each turbine’s asynchronous generator and gearbox are supported by elastomeric elements to minimize noise emissions.

Engineering and construction of the project’s 500-kW solar-power capacity was handled by Alternity Power LLC (South Plainfield, N.J.). Electricity is generated by five separate arrays, totaling 2,700 PV cells, from Sharp Electronics (Huntington Beach, Calif.). Two arrays are mounted on rooftops, two are on the ground, and one is on a carport.

The solar portion of the system cost $3.25 million and was subsidized by a $1.9 million grant from the New Jersey Board of Public Utilities’ Office of Clean Energy. ACUA expects the PV system alone to produce average annual savings of $135,000 in reduced energy costs and sales of Solar Renewable Energy Certificates generated by the system.

In addition to Sharp, other vendors represented on the solar part of the project include: