Midwest Energy has a history of thinking and acting independently, especially since breaking away from the Rural Utilities Service almost 15 years ago. Two years ago, when its board of directors grappled with finding a balance between purchasing and generating electricity, it decided to construct its first power plant in 37 years. A matched set of nine 8.4-MW gas engines at Goodman Energy Center now provides efficient peaking electricity, improved overall system reliability, and backstop capacity for a 325-MW electrical system that features 16% wind power generation.

Hays, located near the western edge of the Great Plains, is the largest city in northwest Kansas. Winters can be bitterly cold for the 20,000 residents, and summer temperatures routinely climb above 100F. Headquartered in Hays is Midwest Energy Inc. (MWE), formerly known as Central Kansas Electric Cooperative. MWE, an independent rural electric cooperative, serves nearly 48,000 electricity customers scattered across 41 counties in central and western Kansas. As is the case with many cooperatives, MWE did not own power generating equipment but provided electricity to its customers that was purchased through long-term capacity and peaking load contracts.

MWE broke away from the Rural Utilities Service (successor to the Rural Electrification Administration) in 1995 after privately refinancing its debt. A key reason the company elected to go it alone was management’s belief that MWE must have a more entrepreneurial spirit if it was to take advantage of the many potential market opportunities that would otherwise be off limits. MWE has since added tens of thousands of customers and is now one of the largest natural gas cooperatives in the nation. However, with independence comes the increased responsibility to provide reasonably priced and reliable electricity for customers.

MWE’s planning process for long-term electricity resources is encapsulated in its triannual long-range resource plan, which is required by the Department of Energy and the Western Area Power Administration, which manages the region’s electricity market. The company’s Risk Integrated Resource Plan (RIRP) examined the range of electricity supply options available and then considered those options in light of its key business objectives of rate stability, supply reliability, competitive rates, and corporate financial strength. These objectives then guide the selection of a combination of long-term fixed-price electricity purchases and purchases from the unpredictable spot market.

The 2007 RIRP update concluded that the prudent approach was a combination of two long-term baseload purchase contracts of 75 MW each and construction of a 75-MW block of peaking capacity. Gary Groninger, senior project manager at Burns & McDonnell, who supported MWE in development of its RIRP, said, "our analysis continued to show that these reciprocating engines were an excellent fit in meeting MWE’s needs particularly with wind as a part of their generating portfolio. These engines have an excellent baseload heat rate and show very little degradation in efficiency even at a 50% load level. We expect MWE to operate these units more than 1,500 hours per year."

MWE selected Kansas City – based Burns & McDonnell in March 2007 to provide engineering design, procurement, and construction services for the Goodman Energy Center (GEC). The plant is named for Mr. Jack Goodman, general manager of Midwest Energy and its predecessor company, Central Kansas Electric Cooperative, from 1951 to 1992. Earnie Lehman, Midwest Energy’s president and general manager, paid tribute to the plant’s namesake when announcing the project: "Our Board and employees could think of no more fitting honor for Mr. Goodman, who created Midwest Energy, than to give his name to our first power plant constructed in 37 years."

Burns & McDonnell engineers were charged with designing a plant that would provide capacity and black-start capabilities to help support MWE’s 325-MW total system demand and backup power supply in the event of a transmission outage (Figure 1). 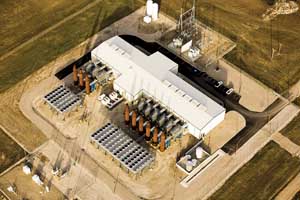 Construction of the project began without delay in April 2007. A June 2008 contract deadline was chosen to assist MWE in meeting summer peak demand.

The first six units, representing 50 MW of generating capacity, entered commercial service on June 3, 2008, just in time for the summer peak demand, only 15 months after MWE gave the project a green light to proceed. The remaining three units began producing electricity on July 16, 2008.

Engines at the Heart of the Plant

The first step in the fast-track $62 million project was to select perhaps the most efficient gas engine on the market, which has a long record of reliable generation in peaking service: the Wärtsilä 20V34SG natural gas – fired engine. Equipped with selective catalytic reduction technology to meet the local stringent air emissions limits, each of the nine Wärtsilä engines has the following nominal performance:

The net site rating of the nine gas engines totals 76 MW. The cost of these nine engines plus appurtenances was just under half of the total project cost, or approximately $30 million.

Wärtsilä, headquartered in Finland, has a long history and extensive experience in the design, building, and turnkey supply of power plants. At the beginning of 2009, Wärtsilä reported more than 40 GW of power installed in power plants in 165 countries. The company is undoubtedly the world’s authority on decentralized intermediate- and peak-load gas engines. These engines are also well proven in other similar peaking applications, including perhaps the largest natural gas – fired engine plant in the U.S.: Cogentrix Energy Inc.’s 111-MW Plains End facility near Arvada, Colo., a POWER 2003 Top Plant. Plains End has 20 Wärtsilä 18V34SG units that can produce 111 MW of intermediate and peak load power.

GEC was constructed on a 4.2-acre site adjacent to MWE’s Knoll substation, an appropriate location to plug in a peaking plant to supply electricity to central Kansas. Each of the nine gas engines is capable of supplying 25% of rated power within 2 minutes of receiving a start signal and can reach full power in only 10 minutes.

The key is the engine’s flat part-load efficiency curve (Figure 2). There are no wrong answers when dispatching these units — it doesn’t matter if the dispatcher brings two engines up to rated load one at a time or starts two or more units and brings them up to rated load in load-sharing mode. Don’t try that with combustion turbines, as dispatchers are obliged to manage a combined cycle as a complete load block. Another plus: Gas engine performance is not reduced with higher ambient temperatures or increased elevation, as is the case with a combustion turbine.

2. Even efficiency. The dispatch plan for the first five of the nine Wärtsilä 20V34SG engines at the Goodman Energy Center shows that very little efficiency is lost with part-load operation. Source: Wärtsilä

There is another important economic advantage to building a plant with multiple engines: Part-load operation results in little loss of efficiency, unlike operating a combustion turbine. This advantage gives an operator the ability to imbed into the dispatch plan a spinning reserve capacity. If the operator elects to operate all nine units at 90% load, then the plant has approximately 7.6 MW of spinning reserve that can be added to the grid in seconds (Figure 3). There are also tangible operation and maintenance (O&M) advantages with a multi-engine plant. With one engine out of service for an overhaul or service at GEC, only 11% of the plant’s rated power is unavailable. A combined-cycle plant lacks that level of redundancy or operating flexibility. 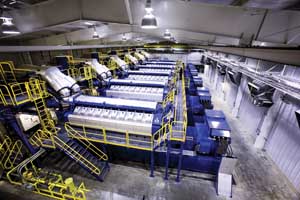 3. Big engine hall. The engine hall is split into two sections with six 8.4-MW, 20- cylinder engines on one side (pictured) and three on the other. Space has been allocated so that an additional three engines can be easily added in the future, as MWE’s needs expand. Notice that the front wall (right) is positioned to allow a crankshaft to be pulled after removal of the generator. Each engine generator system weighs 151 tons and is not bolted to the floor. Instead, each system is mounted on 20 spring packs that eliminate transferring engine vibration to the building foundation. Each engine holds 1,378 gallons of lubricating oil. Courtesy: Burns & McDonnell

GEC’s design also allows additional units to be added at a later date. Wärtsilä calls it adding units in a "rational" manner; incremental units can be easily added to the plant as demand for power increases, without affecting existing operations.

One more advantage of a multi-engine operation with fast-starting and spinning reserve capability is its ability to quickly provide backup to a grid supplied by stochastic generators, such as wind turbines with low capacity factors (<30%).

The Great Plains are known for limited water, so that precious resource must be carefully managed. In his remarks announcing the project, Lehman noted the importance he places on minimizing water consumption. The Goodman Energy Center "provides a clean, cost-effective way to meet the peak energy needs of our customers, and will improve service reliability. This project will provide an efficient resource with… negligible water consumption," he said.

The closed-circuit cooling water system used at GEC eliminates water consumption by that system and the water losses associated with water treatment equipment and wastewater disposal, as is common with central station plants. In fact, all water drained from the system during maintenance is stored and reused. The only water consumed at the site is for cleaning and domestic use (Figure 4). 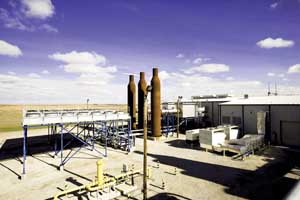 4. Plant back yard. The exhaust gases from each engine exit the building, pass through the selective catalytic reduction system, and then enter the stack. The rusted steel stacks are made out of Cor-Ten steel (A606), which forms a protective rust layer that provides excellent corrosion protection and never needs painting. The fin-fan cooling units, also supplied by Wärtsilä, use clamp-style fittings to connect all the cooling water lines and reduced field construction labor cost by 40%. Courtesy: Burns & McDonnell

One other interesting construction feature: Fly ash from a local coal-fired power plant was used to stabilize the soil in graded areas prior to developing roads and pouring concrete foundations. Crushed, recycled concrete was used as original surfacing for all unpaved areas of the plant.

All grasslands outside the fence, except for the access road, have been returned to native grasses.