Though the resurgence of interest in nuclear power in recent years has spurred development of an assortment of reactor designs, emphasis has mostly been on those with capacities to produce thousands of megawatt-hours of baseload power, as is the case with designs from General Electric, AREVA, Westinghouse, and Mitsubishi that are under active review by the U.S. Nuclear Regulatory Commission (NRC). Power projects using any of those designs will be developed at the cost of many billions of investment dollars.

In 2010, however, the NRC plans to review designs for smaller reactors, such as the International Reactor Innovative and Secure (IRIS), a 335-MWe reactor that has been under development for several years by an international consortium and is thought to be a better fit to meet the power needs of developing countries. And now, as it turns out, the regulatory agency could soon also review and certify nuclear outfits outside the standard small to XXL sizes — those sized XS petite.

Several companies are vying to be the first to commercialize these micro-nukes. Last fall, Hyperion Power Generation, a Santa Fe, N.M., company, launched a publicity campaign for its "hot-tub"-sized 30-MW hydride reactor, a licensed technology developed by Los Alamos National Laboratory. The 10-ton unit, only 5 feet in diameter, is a sealed module with integrated radiation shielding that would be fueled and refueled every five to seven years at the factory (Figure 2).

2. Micro-nuke. Santa Fe–based Hyperion Power plans to manufacture 4,000 miniature reactors, each with a capacity of 30 MW, after it receives the NRC’s approval. The hydride reactor, about the size of a hot tub, is a sealed unit 5 feet in diameter designed to be buried in a concrete vault 10 feet underground. The size of the module makes it an ideal power source for remote applications and for back-up power, the company said. Courtesy: Hyperion Power

It is designed to be transported via ship or truck and be buried — for safety and security reasons — in a concrete vault 10 feet underground. According to the company, the hydride reactor would use uranium hydride, which combines the fissile material with the moderator in the same compartment.

"The mobility of the moderator reverses any overpower excursions," Hyperion said in an August 2008 fact sheet. "Nuclear reactivity runaway is therefore impossible. Any possibility of a mechanical failure is eliminated by the complete lack of mechanical moving parts." Hyperion expects that the waste produced by the unit, approximately "the size of a softball," is a "good candidate for fuel recycling.

Hyperion’s goal is to produce reactors to generate power for less than $0.08 per kWh, and it anticipates that its unit would have four primary uses: to provide off-grid power to military bases; for oil and gas recovery and refining; for remote communities that lack power generation sources; and for back-up power or emergency generation in areas prone to disasters.

Confident that the technology will catch on, Hyperion is looking to build about 4,000 hydride reactors within the first 10 years of production at a cost of between $25 million and $32 million. But first it must receive the NRC’s approval. The company is now preparing to apply for a manufacturing license in September 2009 and hopes to begin production within two to four years. NRC documents indicate, however, that the process could take until 2015.

Hyperion’s hydride reactor isn’t the only serious contender in the micro-nuke race. For the past two years, Toshiba — the Japanese conglomerate that owns Westinghouse — has been working on the 4S (super-safe, small, and simple) reactor, a unit that it claims could produce power for as little as $0.05 per kWh.

The 4S is based on a smaller 10-MW design, the Liquid Metal Cooled Reactor (LMR). That reactor is cooled by liquid sodium instead of water; sodium allows the reactor to run at a higher heat and avoids the use of highly pressurized pipes. The 4S also uses liquid lithium-6 to moderate the reactor instead of conventional control rods. Like the hydride reactor, the 4S is completely sealed and requires no maintenance.

Toshiba has proposed to demonstrate the reactor in the Alaskan village of Galena; if its plans work out, this project could be on-line by 2012. According to the NRC, Toshiba is all set to submit a design approval for the 4S as early as next year. That review should be complete by 2013, the agency expects.

NuScale Power Inc., an Oregon company, is also in the running. Its 45-MW reactor is based on a "multi-application" light water reactor designed by Oregon State University (OSU). The NuScale reactor is a modular unit designed to be built on-site. NuScale estimates that plant construction would take between two and three years. The modular reactor and containment vessel measures about 60 feet in length and 14 feet in diameter. Like other pressurized water reactors, NuScale’s reactor is water-cooled, but it eliminates the many pumps and pipes by working the water through a convection-based "natural circulation system" (Figure 3). The company said that a electrically heated demonstration model one-third the size of NuScale’s reactor at OSU confirmed the effectiveness of the cooling system. 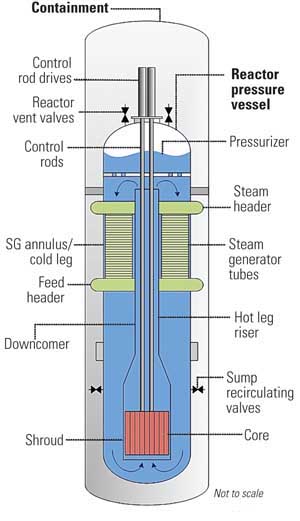 3. Cooling by natural circulation. NuScale Power uses naturally circulated water to cool its mini-pressurized water reactor, eliminating the need for pumps and pipes. Water is heated as it passes over the core. It then rises within the interior of the vessel. Once the heated water reaches the top of the riser, it is drawn downward by water that is cooled passing over the steam generator. It is then pulled by gravity back down to the bottom of the reactor. Water in the reactor system and the steam generator system are kept separate. As the hot water in the reactor system passes over the hundreds of tubes in the steam generators, heat is transferred through the tube walls. Water inside the tubes turns to steam. The steam turns the turbines, which are attached by a single shaft to the electrical generator. Courtesy: NuScale Power

NuScale is prepared to submit an application for design approval to the NRC in 2010. The NRC estimates that its review process will conclude by mid-2013. Because the company employs a familiar technology, according to a February 2008 briefing slide on the NRC’s web site, NuScale could have an advantage over the 4S and hydride reactors. "NRC skill set and tools are lacking for the LMR and hydride reactor," the agency wrote. "With adequate resources and staff, it will take at least 5 years to develop independent capabilities for LMR."