On November 20, New York City Mayor Michael R. Bloomberg and top executives of the real estate company Tishman Speyer announced several energy conservation measures to be implemented at Rockefeller Center this holiday season. One is the outfitting of its famous Norway Spruce Christmas tree with 30,000 light-emitting diodes (LEDs) strung on five miles of wire. Replacing the incandescent bulbs traditionally used to light the tree will cut its daily energy consumption by about 60%, from 3,510 kilowatt-hours to 1,297 kWh. 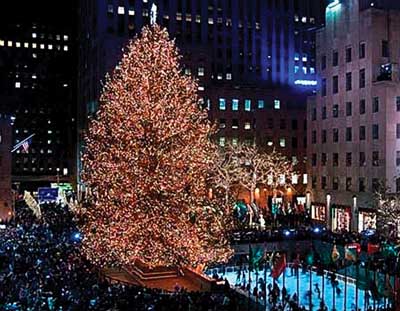 The mayor proudly added that power for the tree’s lights will come from a new array of 363 photovoltaic panels installed on the roof of 45 Rockefeller Plaza. The panels, from General Electric, have a total capacity of 70 kW (DC) and are tied into the Rockefeller Center grid.

"The green initiatives we are putting in place make Rockefeller Center a leader in environmental innovation," said Tishman Speyer Chairman and CEO Jerry I. Speyer at the press briefing. "We have here the largest private solar roof in Manhattan, which will help conserve energy, eliminate carbon dioxide, and power the 30,000 LED lights on our iconic Christmas tree."

Maybe that’s Bloomberg’s and Speyer’s way of ensuring that they don’t get coal in their stockings this year.