It’s only a matter of time before someone in a power plant is killed by a preventable catastrophic failure of a buried natural gas pipeline. The danger posed is less the result of willful negligence than of the temptation to ignore an invisible problem.

Safety has long been a primary concern of U.S. industry, particularly in the power generation sector. Today, on a tote board at their entrances, many plants proudly display a running count of the number of work days accumulated without a lost-time accident. All employees must attend numerous safety training seminars, not only because the U.S. Labor Department’s Occupational Safety & Health Administration (OSHA) requires it, but also because most companies have come to realize that safety is good for business.

Despite this attention, major threats still escape detection by the risk radars of plant workers and managers. One such threat is external corrosion of underground natural gas pipelines at all plants, not just those that convert the fuel to electricity. According to decades of statistics compiled by the U.S. Department of Transportation’s Office of Pipeline Safety (OPS), the leading cause of pipeline failures is external corrosion of buried pipe.

The threat is so significant that the OPS insists that pipeline operators take extensive steps to minimize it. Such steps include installing sophisticated corrosion-prevention systems (Figure 1), regularly maintaining and testing those systems, and reporting the results to regulators—a process the industry calls “pipeline integrity management.” An army of specialists, consultants, and service providers supports the pipeline companies in their efforts to mitigate corrosion. 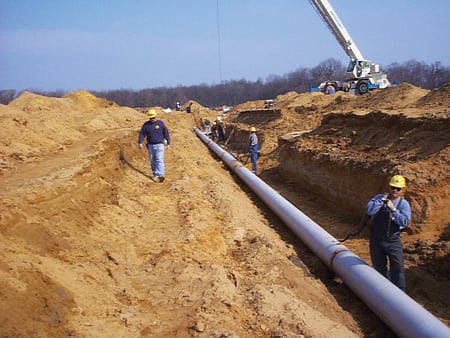 1. Laying pipe. This segment of a natural gas pipeline is being installed to serve a power plant. Operators are required by law to protect their pipelines from corrosion that could compromise pipe integrity and lead to an explosion. But their responsibility for corrosion protection ends at the isolation flange, where the line enters the plant through a metering station. Courtesy: Matcor

This process does much to protect the public from the devastating effects of a ruptured pipeline, but it does little to protect plant workers. That’s because pipeline operators’ responsibility for integrity management ends at the metering station, where the pipeline enters the plant. There, the pipeline company installs a flange that electrically isolates its regulated portion of the line and its corrosion system from the final unregulated segment of pipe. The isolation flange marks the physical and legal transfer of responsibility for pipeline safety from the pipeline operator to the plant owner.

Pipeline companies’ corrosion-prevention measures take three forms: coating the pipeline during its construction, installing what’s known as a cathodic protection (CP) system to keep stray currents from fostering corrosion as the coating deteriorates, and regularly testing the integrity of the pipeline and the performance of the CP system. The tests include monthly inspections of the system’s key components—rectifiers (Figure 2), annual testing to ensure that the operating environment hasn’t changed, and intense surveying every seven to 10 years to validate the pipeline’s physical integrity. If any defects detected in the system are not reported to regulators and fixed promptly, the pipeline operator is fined. 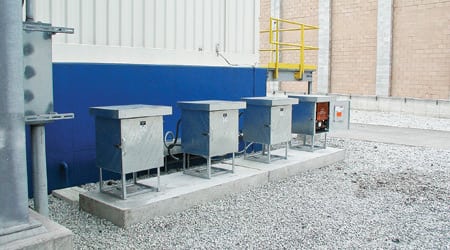 2. Rectifying the problem. The key components of a pipeline’s cathodic protection system are rectifiers like these. Courtesy: Matcor

Out of sight, out of mind

Recently, I visited a power plant built around 1970. Unlike many plants of that vintage, the “inside the fence” portion of this plant’s gas pipeline was coated and equipped with a CP system to keep corrosion at bay. But although my hosts showed me the detailed drawings and other documentation supplied as part of the installation, no commissioning report was available, and the plant’s maintenance files lacked any test data to confirm that the system had ever worked properly. That didn’t surprise me as much as it probably shocks you. At too many power plants built with a pipeline CP system, the system is installed and turned on but never inspected or tested later.

At the plant I visited, the CP system was neglected because it was forgotten. I talked to some veteran maintenance personnel who knew where the rectifiers were located and to one technician who checked them occasionally to see if they were still on. But there was no rigorous testing of the system, and no process was in place to balance the outputs of individual rectifiers to optimize the system’s compensation for coating deterioration. I attribute those shortcomings not to negligence on the part of workers or management but rather to the sad fact that CP of buried gas pipelines is not a priority at a competitive power plant.

Finally, after operating with this risk for more than 35 years, the plant hired a knowledgeable CP service company to test the system. Management took this step not for safety reasons but as part of an unrelated corporate environmental initiative to minimize the potential for fuel oil leakage from two large, above-ground storage tanks. The results were predictable: the CP system installed in 1970 no longer worked because it had several inoperable rectifiers and depleted anodes. What the tests could not say, however, was when the system had stopped working—or even whether it had ever been functional.

What I found most disturbing about the CP service company’s report was that it did not identify the unprotected buried gas pipeline as a threat to the plant’s personnel and assets. Unfortunately, this “out of sight, out of mind” attitude is all too common in the U.S. power industry. At too many power plants, the “contractor-grade” CP systems installed to protect buried gas pipelines are neither maintained nor tested. As the plants age and pipeline coatings deteriorate, external corrosion becomes a very serious threat.

No time to lose

What can power plants do to prevent failures of their buried gas pipelines? Matcor recommends taking the following basic steps:

Research your plant’s construction. Was a CP system originally installed? Do you have a copy of the original CP system acceptance test report?
Talk to your maintenance personnel. What do they know about the plant CP system? Do they inspect it periodically? Are they maintaining good records? Has a third-party expert been retained to advise them and to validate the system’s performance on a regular basis?
Develop a plan and budget for testing your system and submit it to management. Be sure the proposal emphasizes the dire and expensive consequences of a catastrophic gas pipeline failure inside the plant.
Hire a qualified expert to develop a budget for thoroughly testing your existing CP system and upgrading it to good working condition. Make sure that the recommended test protocols meet criteria established by NACE, formerly known as the National Association of Corrosion Engineers.
Implement your own pipeline integrity plan. A good initial resource for developing the plan is your natural gas provider, which has a corrosion technician responsible for your supply line up to your isolation flange, as well as an integrity plan that can be partially emulated. For example, above-ground tools are available that can detect signs of underground corrosion and assess its severity.
Add a course on CP to your maintenance training curriculum—a little knowledge can go a long way.
In a subsequent article, I’ll explain in detail how modern cathodic protection systems work to mitigate the corrosion risks specific to power plants with buried natural gas pipelines. Until then, I hope this article has achieved its goal: alerting you to the very real threats posed by unprotected gas pipelines. Corrosion is a time-dependent phenomenon: the longer you wait, the higher the risk. Given the deadly and costly consequences of a natural gas explosion, why not act now?

—Ted Huck (thuck@matcor.com) is vice president of sales and marketing for Matcor Inc.