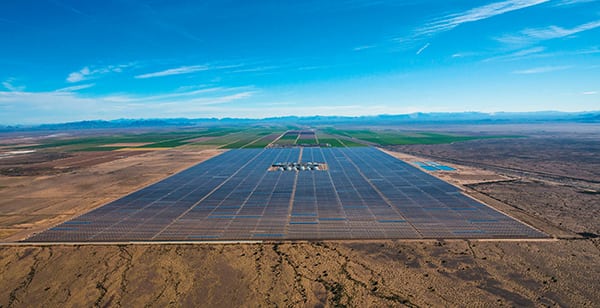 The 280-MW Solana Generating Station combines concentrating solar power (trough) technology with thermal energy storage, which allows the plant to operate after the sun goes down with up to a 38% annual average capacity factor. The $2 billion project began generating electricity in October 2013. Courtesy: Abengoa Solar

The Solana Generating Station ( solana in Spanish means “sunny spot”) is built on a 1,920-acre site near Gila Bend, about an hour’s drive west of Phoenix. According to Abengoa, which owns the facility through its subsidiary Abengoa Yield, this is the largest parabolic trough technology project with molten salt thermal energy storage in the world. The plant is rated at 280 MW gross and 250 MW net of the auxiliary power required to operate the fluid and steam systems.

Arizona Public Service (APS) purchases 100% of Solana’s power output under a 30-year power purchase agreement (PPA) for a reported 14 cents/kWh. The PPA is part of the utility’s plan to meet the Arizona Corporation Commission’s mandate that the state’s regulated utilities provide 15% of their electricity from renewable energy sources by 2025. Power produced by Solana enters the grid at the APS Panda Substation, located about 18 miles from the plant.

Construction of the $2 billion project began in December 2010, and the plant began electricity production on Oct. 7, 2013. The engineering, procurement, and construction contractors for the project were Teyma USA and Abener Engineering and Construction Services. The U.S. Department of Energy’s Loan Projects Office provided a $1.45 billion loan guarantee for the project.

“Solana is a monumental step forward in solar energy production,” said Don Brandt, the president of APS, the local utility. “This provides a huge boost toward our goal to make Arizona the solar capital of America.” Ongoing operation and maintenance of the plant also added about 85 new, much-needed jobs to the region.

Intermittent operation of solar projects, usually as a result of weather patterns, remains the most common complaint about utility-scale solar projects. Abengoa noted in a recent report, “Dispatchability… eliminates intermittency issues that other renewables, such as wind and photovoltaics, contend with, providing stability to the grid and thus increasing the value of the energy generated.”

Abengoa is able to dispatch its generation by integrating its proprietary parabolic-trough concentrating solar power (CSP) technology with thermal energy storage. The tradeoff for increased flexibility in plant operations is that less electricity is produced during the daylight hours in order to “charge” the thermal energy storage system.

However, the primary function of the storage system is to extend plant operation up to six hours each day to “satisfy Arizona’s peak electricity demands during the summer evenings and early night time hours,” according to an Abengoa Solar statement. This is particularly helpful during the hot Arizona summer months, when air conditioners run 24/7.

The financial and operating flexibility benefits are apparent: Solana is capable of operating with a 38% average annual capacity factor against a typical 25% produced by a utility-scale photovoltaic plant. Abengoa estimates that Solana will produce about 944 GWh of highly desirable dispatchable generation each year. According to the U.S. Energy Information Administration, for the first seven months of 2014, the plant produced 374,181 MWh, which is equivalent to a net capacity factor of 29.5%, a very respectable achievement. That statistic will climb once the remaining high production summer and fall months are accounted for.

The advantages in energy production that accrue to a CSP plant with energy storage must be balanced against a significant increase in plant complexity. The plant’s 3,200 mirrored parabolic-trough collectors, each consisting of 28 curved mirrors, efficiently reflect and focus solar energy on a thermal “pipe” located at the focal point of the parabolic trough as the assembly tracks the sun’s position in the sky. Therminol VP-1, the heat-transfer fluid, is heated up to about 735F by the sun and circulated through a web of heat collection pipes.

A heat exchanger transfers energy from the Therminol to a secondary water loop. The water, much like in a conventional boiler, flashes into vapor at 1,450 psi and is then directed to the plant’s two 140-MW steam turbines. The steam expands through the steam turbine and is condensed in a condenser that is cooled by a wet cooling tower. In sum, the power-generation cycle is comparable to that used in a conventional fossil-fueled thermal power plant, with the exception that the Therminol loop replaces the fuel-burning boiler as the heat source.

Hybrid CSP-steam plants are often criticized for excessive water usage because their consumption is on par with a like-sized conventional steam plant. Sandy Bahr, a spokesperson for the Sierra Club at the time the project was requesting state permits in late 2008, stated the Sierra Club’s position on water use and Solana: “It is on private land, not public land, and is currently agricultural land. Depending on how you calculate it [the power plant] will use 75 to 85 percent less water than the current agricultural use. It is still a fair amount of water but it is much less than it takes to grow alfalfa.”

The energy storage system uses molten salts to store thermal energy that can be recovered later in the day. Molten salt is used because it is liquid at atmospheric pressure, its operating temperatures and pressures are compatible with conventional steam turbines, it is nonflammable and non-toxic, and the price is right. Molten salt is also commonly used in the chemical and metals industries, so there is an extensive operating history with these fluids in non-solar applications. Generally, molten salt is a mixture of 60% sodium nitrate and 40% potassium nitrate, which melts at 430F and is stored as a liquid at a minimum of about 550F.

Molten salt is stored in 12 insulated tanks measuring 45 feet tall, 140 feet in diameter, and holding 125,000 metric tons of salt (Figure 1). During the day, some of the heated Therminol is used to heat the molten salt up to about 730F in six “hot” tanks. During off-peak hours, molten salt is taken from a “hot” tank, transfers its thermal energy into steam production, and is then stored in a “cold” tank. During the following day, the molten salt is reheated and the heat recovery process repeats. A “hot” insulated storage tank can store heated molten salt for up to a week. The entire energy storage and retrieval process operates at about 70% efficiency.

The advantage for APS with this arrangement is that it decouples the solar collection system from the energy storage system. APS can effectively store electricity produced during off-peak hours when wholesale prices are lower and dispatch it during the evening on-peak hours or even during the day to cover adverse weather conditions.

In early October 2013, the plant “passed commercial operation tests,” according to Abengoa. The tests consisted of running the plant’s generator at full power while also ramping up the thermal storage system. Next, after allowing the solar part of the plant to stop once the sun was down, the plant continued to produce electricity using only thermal energy storage for another six hours. Those tests were very successful, and the plant was placed into commercial service. ■