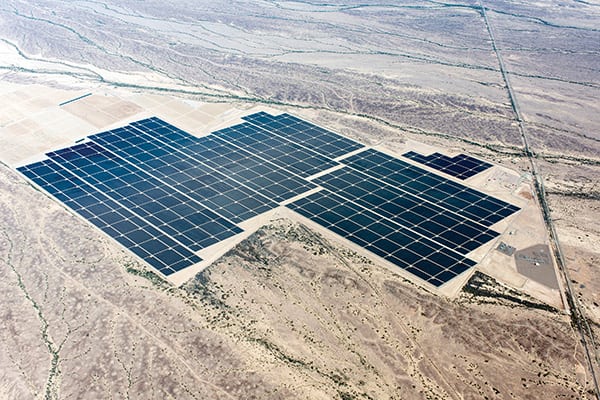 The 290-MW Agua Caliente Solar Project is the latest addition to the nation’s growing solar capacity and now holds the title as the largest photovoltaic plant in the world. The $1.8 billion project was completed in April 2014. Courtesy: NRG Energy

The western Arizona desert has become a popular location for constructing large solar projects. The sunshine is plentiful and there are large tracts of non-prime farmland available that make building utility-scale photovoltaic (PV) plants, such as the Agua Caliente Solar Project, attractive. The project is strategically located on 2,400 acres 65 miles east of Yuma, near the farmland communities of Dateland and Hyder, and adjacent to an existing Hassayampa–North Gila 500-kV transmission corridor. A new regional switchyard was also constructed.

Initial planning for Agua Caliente was begun in 2008 by NextLight Renewable Power. A 25-year power purchase agreement (PPA) with Pacific Gas & Electric was finalized in September 2009, as was approval of the interconnection agreement by the Federal Energy Regulatory Commission. The remainder of the critical permits and authorizations were received the following year. The California Public Utilities Commission (CPUC) approved the PPA in June 2010. The Arizona Corporation Commission approved the project, and the Yuma County special use permit was approved in September 2010. The $1.8-billion cost was supported in part by a $967-million loan guarantee from the U.S. Department of Energy (through its Loan Programs Office), which was approved in August 2011.

First Solar, a leading global developer and supplier of PV solar systems using its advanced thin-film cadmium telluride (CdTe) PV modules, acquired NextLight in July 2010 and along with it the rights to develop Agua Caliente. NRG Energy acquired the project from First Solar in August 2011, and in January 2012, MidAmerican Renewables purchased a 49% share.

NRG Energy, through its wholly owned subsidiary NRG Renew, has quickly established its position as a leader in utility-scale solar energy projects. It has almost 2,000 MW of solar capacity in operation or under development or construction across the southwestern U.S., including the 392-MW Ivanpah Solar Electric Generating Station ( POWER’s 2014 Plant of the Year and the world’s largest solar thermal power plant) and the 250-MW California Valley Solar Ranch. The rapidly increasing size of solar energy plants is remarkable when you consider that the largest PV plant in the U.S. in 2009 was the 14-MW plant at Nellis Air Force Base in Nevada.

The approximately five million fixed-tilt-angle PV panels, installed no more than six feet above ground to minimize visual impact, are configured based on the rating of the inverter. The Series 3 thin-film panels are each rated from 77 watts to 82.5 watts, and 20,459 panels are connected into each 1.26-MW array block.

A power conversion station consists of a single PV array and two SMA Sunny Central 630CP inverters, more than 500 of which are used on the project. This model inverter was selected because it is designed to be used in large open-field projects in locations with ambient temperatures up to 122F. The inverters use new fault ride-through technology in order to improve the reliability and predictability of the electricity supplied to the grid. Agua Caliente is the first PV plant in the U.S. to adopt this dynamic voltage regulation technology.

Agua Caliente also features First Solar’s grid integration and plant control system design, which improves plant reliability and stability. The system gives the plant the ability to regulate voltage, frequency, and power factor much like a typical fossil fuel–fired plant, thereby minimizing the impact of changing cloud cover. The system also provides control of active and reactive power and ramp rates, and can curtail power should the need arise. More importantly, the system allows the plant to ride through grid system faults and disturbances.

First Solar was the engineering, procurement, and construction contractor for Agua Caliente, bringing its “latest advances in system layout and design, optimized balance-of-plant components, and integrated work-flow engineering” capabilities to the project. First Solar is also responsible for the operation and maintenance of the commercial plant as well as supplying the thin-film PV modules.

The project was constructed in two phases. The first, 100-MW phase began construction in the fall of 2010, with the first solar modules beginning installation in June 2011, two months before the DOE loan guarantee was finalized and NRG Energy acquired the project. Seven months later, in January 2012, the project was generating 39 MW for the grid. The plant reached the 100-MW plateau in April 2012 and was producing 200 MW that July.

Construction of the 190-MW second phase was completed in April 2014, enabling the plant to produce the 290-MW design output. In fact, the plant has been producing up to 250 MW since September 2012. The plant is predicted to produce an average of about 626 GWh each year, which is an approximately 24.6% capacity factor from a solar resource rated at 2,405 kWh/m2/yr (Figure 1). The plant’s actual capacity factor in 2013—its first full year of operation—was 26.6%, according to data from the U.S. Energy Information Administration (EIA). Electric production for 2014 (through July, the latest data available from the EIA) is running over 17% higher than 2013.

Construction was delayed during the second half of 2012, though not for reasons you might expect. The delay resulted because First Solar had not only met all of its contractual milestones for constructing the plant but had also exceeded its installation efficiency targets. As a result, First Solar had to readjust the pace of the construction work to come more in line with future contractual milestone completion dates. This adjustment allowed First Solar “increased flexibility to allocate its solar module supply to better serve increased demand in the second half of 2012 across its portfolio of projects.” In other words, installation of PV modules was proceeding faster than expected, and Agua Caliente was consuming more than its fair share of PV panels coming off the assembly line.

“Large-scale utility accomplishments, like our Agua Caliente project, raise the bar in terms of our clean-energy technology and production,” said Tom Doyle, president, NRG Renew. “Proving that we can build both the world’s largest solar thermal and now one of the world’s largest solar photovoltaic facilities advances NRG’s mission to reshape the energy landscape that is incredibly beneficial to both the economy and in how we produce and consume energy. Whether it’s partnering, developing or investing, NRG will lead the way in providing a diverse set of solutions and technologies to get the U.S. to the ultimate goal of providing affordable, reliable clean energy for everyone.”

The future of large-scale PV generation in the Southwest is difficult to estimate. The Arizona desert is large, but the best locations near existing high-voltage transmission lines are already spoken for. The challenge of financing these very capital-intensive projects remains. Finally, the utility appetite for more renewable generation is questionable.

California, where the power produced by Agua Caliente will be used, is “on track to meet its interim requirement of 25% renewables by 2016, and is well positioned to meet 33% by 2020,” according to the CPUC. In fact, the project status report on the California Energy Commission website shows only three new utility-scale solar projects under construction in 2014 with a 2015 or 2016 completion date, and no plants with a completion date beyond 2016. The remaining applications are noted as either cancelled, on hold, or listed with a “TBD” start date.

What we are likely observing is a spike in utility-scale PV installations in the Southwest that appears to abate around 2016. If California is able to meet its 33% by 2020 renewable energy goal without additional PV mega-plant construction, then it’s likely that future PV projects will be local distributed generation rather than remote central stations. This observation does not in any way detract from the accomplishment that Agua Caliente represents but rather celebrates what is likely to become a unique feature of the plant. ■