ASME’s latest revision of its Recommended Practices for the Prevention of Water Damage to Steam Turbines Used for Electric Power Generation: Fossil-Fuel Plants, ASME TDP-1-2006, contains much important design and operating advice that is proven to protect steam turbines. However, many in the industry are not as familiar with the update as they should be. This article provides a concise overview of this critical design standard.

ASME TDP-1, Recommended Practices for the Prevention of Water Damage to Steam Turbines Used for Electric Power Generation: Fossil-Fuel Plants, was initially developed in response to a rash of water induction incidents in the 1960s as power plant ratings were scaled up above 150 MW. TDP-1 was originally published in 1972; revisions were made in 1979, 1985, 1998, and 2006. The latest revision to TDP-1 includes conventional steam (Rankine) cycle and combined-cycle power plants. (Nuclear power plants are covered under TDP-2.)

Water can be inducted into a steam turbine from several sources, including these: 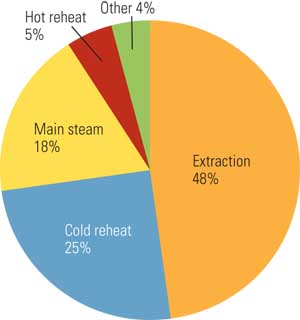 Water induction can happen at any time; however, it is most common during transients such as those that occur during start-up, shutdown, and load changes. Figure 2 illustrates the percentage of times various events contribute to water induction for a conventional steam cycle. It is interesting that only 18% of water induction incidents occur when the unit is at load.

When water induction does occur, it can damage steam turbines in several ways. The damage is usually caused by the impact of large slugs of water or by the quenching effect of cold water on hot metal. The severity of water damage can vary from minor seal rubs all the way to catastrophic damage to the turbine. Generally, water damage falls into the following categories:

TDP-1 offers guidance on how to identify systems that have a potential to allow water to enter the turbine and to design, control, maintain, test, and operate these systems in a manner that prevents any significant accumulation of water — the first line of defense in preventing turbine water damage. However, malfunctions do occur, so TDP-1 offers recommendations for preventing turbine damage that include:

The philosophy of TDP-1 has been and will continue to be that "no single failure of equipment, device, signal, or loss of electrical power should result in water or cold steam entering the turbine."

Motive steam systems do not include:

In this document, a combined cycle is defined as a hybrid of the gas turbine (Brayton) and steam (Rankine) cycles. Waste heat contained in the gas turbine exhaust is fed through an HRSG that produces steam that is expanded through a condensing steam turbine to produce power.

Heat-Recovery Systems. HRSG system configurations typically include as many as three steam drums, each with boiler water level controlled by feedwater valve modulation and condensate or feed pump recirculation or a similar method of controlling inflows. The same plant design requirements that apply to other steam generators apply to HRSGs.

The use of attemperators external to the steam generator, downstream of the last superheating (or reheating) element, is discouraged; however, it is recognized that under some conditions it cannot be avoided. When this type of attemperator is required in the motive steam line to control the temperature of the steam entering a steam turbine, several additional features are recommended to provide adequate protection.

When the gas turbine cooling steam or power augmentation steam pipe is connected to a motive steam line, this pipe should not be connected at or near the low point of the motive steam pipe. If routing of this pipe creates a low point, a drain should be provided from the pipe.

Turbine Bypass Systems. Turbine bypass systems should be provided with the same level of protection as motive steam piping. These should include drains and drain pots (if applicable) with power-operated drain valves. Attemperators in bypass systems that discharge to the cold reheat system (or any other line connected back to the steam turbine) should be designed consistent with all the requirements on attemperators. Non-return valves should be provided in the cold reheat system to prevent the reverse flow of bypass steam into the steam turbine. Designers should carefully consider the location, design, and orientation of large steam dumps (such as turbine bypasses) into the condenser.

There are three types of steam line drains regardless of the configuration of the steam power plant:

Figure 3 shows a typical drain pot with redundant level elements typically used in "high-risk" areas. One change in the guideline is the level-sensing device, which now is labeled as a level element (LE). In past versions of the guidline this device was shown as a level switch. The level element in the latest version can represent either a level switch, a thermocouple, or a conductivity probe. 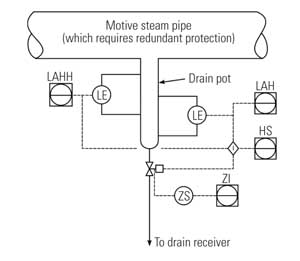 Drains should be installed at each low point in motive steam piping. Placement of drain pots is recommended at:

As plants become more complex and a larger number of drains are involved, plants are adding automatic controls to simplify operation. Any automatic control system used to control steam line drain valves identified in these guidelines should be designed so that the system has a means of initiating automatic valve actuation and a separate means of verifying the appropriateness of the automatic action. If an inappropriate action is taken, an alarm should be provided. For example, if a drain valve is closed automatically based on a timer, an instrument other than the timer, such as a level switch that would alarm if water were still present in the steam line, should be used to verify that the timer initiation was appropriate. 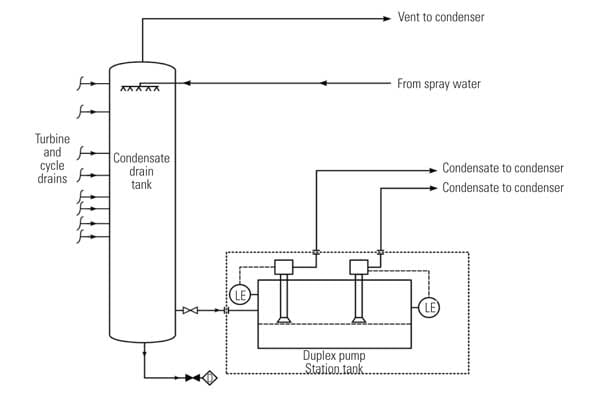 Axial and side exhaust can be used to lower the turbine pedestal and minimize plant cost (Figure 5). But compared to a down exhaust condenser, this configuration adds risk because of the proximity of condenser water level to turbine blades. 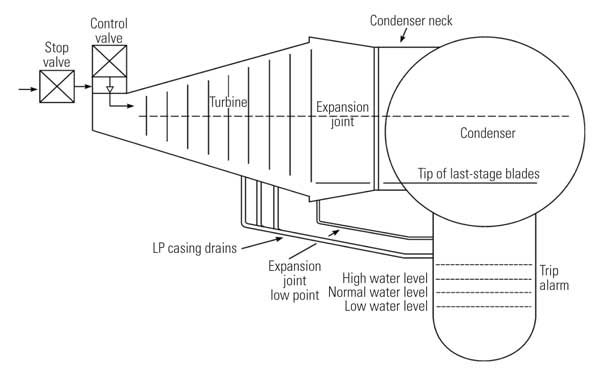 5.    Keep your blades dry. This illustration of an axial exhaust steam turbine with condenser drains and water levels is used to show that water should never accumulate higher than the tip of the last-stage blades. Source: ASME TDP-1-2006 Committee

Because of the axial and side exhaust steam condenser’s relatively compact design and close proximity to the steam turbine exhaust, condenser designers should carefully consider the location, design, and orientation of large steam dumps (such as turbine bypasses) into the condenser. This is necessary to avoid or minimize the injection of large, and potentially damaging, quantities of water into the steam turbine exhaust.

The steam dump should be designed to disperse sufficient incoming steam energy to avoid backflow toward the turbine. Considerations should include, but not be limited to, desuperheater station placement and placement and configuration of high-energy steam dumps to avoid velocity vectors toward the steam turbine and to achieve maximum possible steam dispersion. Criteria that should be considered include the following:

Determine an incidence angle of high-energy steam jets that will avoid reflected velocity vectors toward the turbine exhaust. 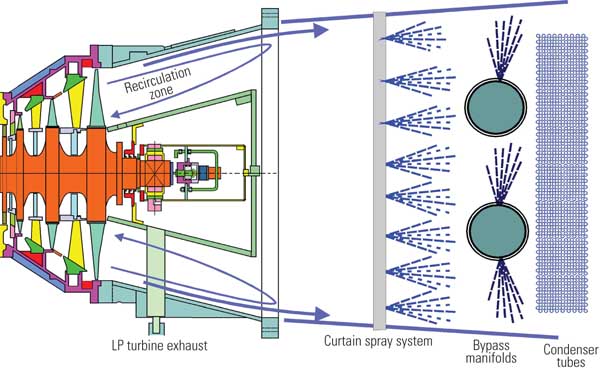 In the ASME standard an ICS is defined as a control system featuring multiple processors, input/output modules, and memory storage interconnected through a communication network and equipped with redundant power supplies. Normally, a DCS or redundant programmable logic controllers will meet this requirement.

The minimum ICS features to meet the reliability and redundancy needs addressed in this recommended practice are:

The committee is now working on TDP-2 for nuclear power plants. Look for it in the near future.