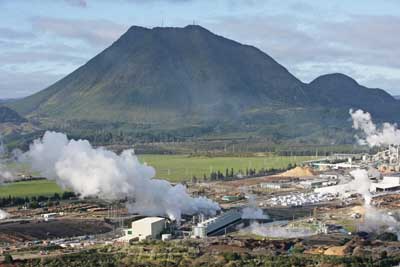 "This impressive plant here at Kawerau is an example of how we are diversifying our generation portfolio to provide sustainable and reliable energy for the nation. Geothermal’s contribution to New Zealand’s electricity supply is expected to grow from 5 per cent of total electricity supply, to something like 15 per cent by 2015.

"While hydro generation is the backbone of the company’s generation output, we are excited about the potential of geothermal as an energy source, especially with its significant environmental advantages."

Geothermal fluid at 215C to 220C (419F to 428F) is extracted from six wells ranging from 1,900 to 2,100 meters deep in sites 2 km from the Kawerau Geothermal Station. Pressurized steam and water is transported through 8 km of pipeline to the station, where it is separated from the water, with the steam being used to drive a single steam turbine and generator. The steam is cooled and injected into a well 2 km north of the field, while the remaining water is injected into four wells 2km north of the field.

Electricity from the station is fed into the national grid at a substation near the Norske Skog Tasman mill.

Construction at the NZ$300 million Kawerau Geothermal Station began in January 2007. The plant, which has a staff of 11, became operational in August—six weeks ahead of deadline and under budget.