A new power generation system that uses solid oxide fuel cells in conjunction with natural gas and promises lower carbon emissions would not use any new technology, according to researchers at the Massachusetts Institute of Technology (MIT), but rather would combine existing components in a novel configuration.

The process, which uses natural gas and solid oxide fuel cells at high electrical efficiency (74% HHV), uses a steam reformer heat-integrated with the fuel cells to provide the heat necessary for reforming (Figure 6). The fuel cells are powered with hydrogen and avoid carbon deposition issues. MIT postdoctoral associate Thomas Adams and Paul I. Barton, the Lammot du Pont Professor of Chemical Engineering, say in a recent Journal of Power Sources article that 100% of carbon capture is achieved downstream of the fuel cells with very little energy penalty using a multi-stage flash cascade process, where high-purity water is produced as a side product. 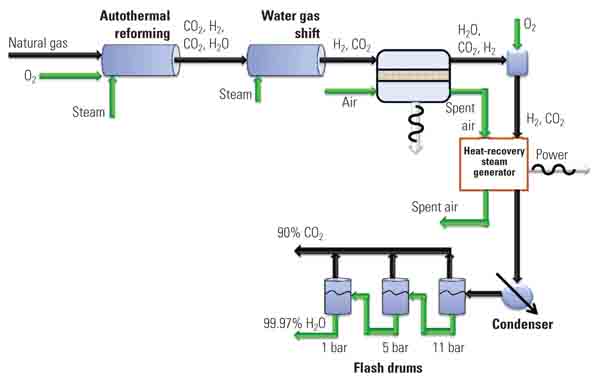 6.     A natural gas/fuel cell hybrid. A power generation system proposed by MIT researchers, which uses a novel configuration of natural gas and high electrical efficiency solid oxide fuel cells, promises near-zero carbon emissions. The process contains a steam reformer integrated with the fuel cells to provide the heat necessary for reforming. Alternative reforming techniques such as carbon reforming, autothermal reforming, and partial oxidation are also considered. The capital and energy costs of the proposed process are considered to determine the levelized cost of electricity, which is low when compared with similar carbon capture–enabled processes. Courtesy: MIT

The researchers used computer simulations to analyze the relative costs and performance of the system. Although no full-scale plants using such a system have yet been built, "the basic principles have been demonstrated in a number of smaller units," the researchers say, including a 250-kW plant. Prototype megawatt-scale plants are planned for completion around 2012.

Actual utility-scale power plants would likely be on the order of 500 MW, Adams says. And because fuel cells, unlike conventional turbine-based generators, are inherently modular, once the system has been proved at small size, it can easily be scaled up. "You don’t need one large unit," Adams explains. "You can do hundreds or thousands of small ones, run in parallel." Adams says practical application of such systems is "not very far away at all" and could probably be ready for commercialization within a few years. "This is near-horizon technology," he says.