In inertial confinement fusion (ICF) experiments, the energy of 192 powerful laser beams is fired into a pencil eraser – sized cylinder called a hohlraum, which contains a tiny spherical target filled with deuterium and tritium, two isotopes of hydrogen (Figures 2 and 3). Rocket-like compression of the fuel capsule forces the hydrogen nuclei to combine, or fuse, releasing many times more energy than the laser energy that was required to spark the reaction. 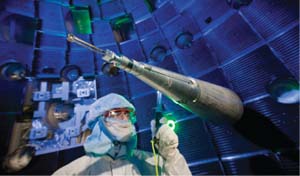 2. Precision alignment. A National Ignition Facility technician checks the target positioner, which precisely centers the target inside the target chamber before each experiment and serves as a reference to align the laser beams. Source: Lawrence Livermore National Laboratory 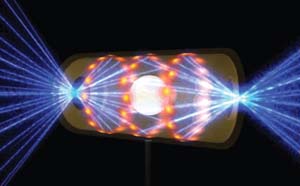 3. Tiny target. This artist’s rendering shows a target pellet (the white ball) inside a hohlraum capsule with laser beams entering through openings on either end. The beams compress and heat the target to the necessary conditions for nuclear fusion to occur. Source: Lawrence Livermore National Laboratory

The interplay between the NIF’s high-energy laser beams and the hot plasma in NIF fusion targets, known as laser-plasma interactions (LPI) has long been regarded as a major challenge in ICF research because of the tendency to scatter the laser beams and dissipate their energy. But during a series of test shots using helium- and hydrogen-filled targets last fall, NIF researchers were able to use LPI effects to their advantage to adjust the energy distribution of NIF’s laser beams.

The experiments resulted in highly symmetrical compression of simulated fuel capsules — a requirement for NIF to achieve its goal of fusion ignition and energy gain when ignition experiments begin later this year.

In a Science Express article, Siegfried Glenzer, NIF plasma physics group leader, ICF Program Director Brian MacGowan, and their NIF colleagues reported that "self-generated plasma-optics gratings on either end of the hohlraum tune the laser power distribution in the hohlraum, producing symmetric X-ray drive." Glenzer said the gratings act like tiny prisms, redirecting the energy of some of the laser beams just as a prism splits and redirects sunlight according to its wavelength.

The test shots proved the NIF’s ability to deliver sufficient energy to the hohlraum to reach the radiation temperatures — more than 3 million degrees Centigrade — needed to create the intense bath of X-rays that compress the fuel capsule. When NIF scientists extrapolate the results of the initial experiments to higher-energy shots on full-sized hohlraums, they think they will be able to create the necessary hohlraum conditions to drive an implosion to ignition.