Duke Energy’s W.H. Zimmer Station (Figure 1) is a 1,300-MW coal-fired power plant located on the Ohio River at Moscow, Ohio. The unit entered commercial operation in 1991 and consumes approximately 3.8 million tons of coal annually. The U.S. Environmental Protection Agency required the Zimmer Station to remove a minimum of 91% of the sulfur dioxide (SO2) from the flue gas while not exceeding an emission rate of 0.548 pounds of SO2 per million Btu based on a 30-day rolling average. 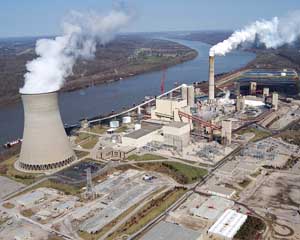 1.    Powering Ohio. By making modifications in 2000 and 2007, the W.H. Zimmer Station in Moscow, Ohio, dramatically decreased the amount of scrubber by-product that has to be landfilled. Courtesy: Duke Energy

The station is equipped with a magnesium-enhanced wet flue gas desulfurization (FGD) system (scrubber) to control SO2 emissions. In 2000, the scrubber process was modified to accommodate a gypsum conversion process system to make high-quality synthetic gypsum that is sold to a wallboard manufacturer. Prior to the scrubber modification, scrubber by-products were landfilled at an average rate of 1.7 million tons per year. The 2000 modification cut the landfill rate by 77%.

In 2007, station personnel set out to further improve the overall performance and effectiveness of the FGD dewatering process. A team consisting of station personnel, GE Water & Process Technologies, and Utter Construction worked closely throughout the year to identify potential areas of improvements and create/modify key performance objectives.

At Zimmer Station, magnesium-enhanced lime is mixed with water in a ball mill (crusher), resulting in an exothermic (heat producing) slurry production process known as "slaking." The "slaked lime" or "slurry" is then pumped to the absorber modules, where it is used to neutralize or "scrub" the flue gas. The operating pH in the absorber tower reaction tank is maintained between 5.7 and 6.8.

The scrubber bleed stream enters the oxidation tank from the top, where an oxidation process involving an exothermic reaction begins. The bleed stream material temperature is typically increased from approximately 125F to a range of 135F to 170F, depending on operating conditions. Sulfuric acid (93%) is added to the process to decrease the pH to acceptable levels (4.5 to 5.2) for the conversion of calcium sulfite to calcium sulfate or gypsum. The amount of additional acid required for the conversion depends on the quantity of unreacted calcium hydroxide, magnesium hydroxide, calcium carbonate, and bisulfate entering the oxidizer from the scrubber.

The calcium sulfate formed in the oxidation tank is then dewatered via a bank of hydroclones at approximately 26 psig. The resulting hydroclone overflow containing <15 weight % solids is recovered and sent to a clarifier. The solids settle in the clarifier, and the water is returned to the system to be used as absorber density control water in the FGD process.

The hydroclone underflow is approximately 60 to 70 weight % solids and is discharged to a horizontal extractor-dewatering belt, where the gypsum is washed to remove chlorides and total dissolved solids. The dewatering belt uses a vacuum blower to remove the additional moisture, resulting in wallboard quality gypsum dewatered to approximately 90%. The wallboard quality gypsum is then stored on the station pad or placed directly on a barge for shipment to a wallboard plant.

During conversion of the FGD process from a calcium sulfite sludge/fixation one (also known as Poz-o-tec, which is fly ash lime – stabilized FGD sludge) to the current gypsum recovery process, the team had to overcome several major obstacles.

Also unforeseen at the time of the conversion was the impact of the inert material (iron oxides and silica) that entered the FGD system in the lime supply. This material is contained and recovered via the oxidation dewatering hydroclone overflow. Inert material cycled up in the FGD system, and because there was no effective way to remove it, it caused poor gypsum quality. The low density of this material also meant that it wouldn’t settle in the station’s pond system, which led to very high costs associated with removing the material.

To address this issue, the team removed the inert material from the clarifier via a clarifier lateral pump (CLP). The CLP takes a side stream of material from the clarifier and pumps the material to one of two settling thickeners. Then polymer is added to the settling thickener, which allows the inert material to increase to a density of approximately 15% to 22%. The settled material is pushed to the thickener underflow pump suctions (using a TUF Pump). The material is then pumped to and processed by a centrifuge system and removed by truck to the landfill. The clarifier underflow is returned to the oxidation tank for gypsum recovery.

Finally, many of the Zimmer Station’s FGD-associated pumps, sumps, and other miscellaneous equipment had to be modified to deal with gypsum settling and the abrasiveness of the gypsum material.

In 2007, Duke Energy set out to further improve the overall performance and effectiveness of the FGD dewatering process. Key performance objectives were to:

To achieve its goals, the team made improvements in the FGD system design and operation that included the mechanical, chemical, and operational changes discussed below and shown in Figure 2. 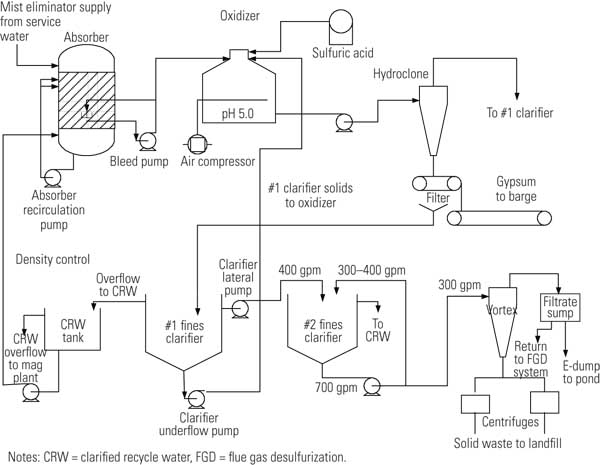 2.    FGD process with gypsum conversion. This diagram shows an overview of the  Zimmer Station’s FGD system layout after it was retrofitted in 2007. Courtesy: Duke Energy

Cleaning of the FGD Blowdown Line. This involved the installation of cleanouts and more-frequent cleaning of the FGD bleed stream blowdown lines in order to improve the recovery of gypsum to the oxidizer rather than to the clarifier/thickener.

Relocation of the #1 Clarifier Lateral Pump Suction and Transferring the Side Stream Flow to #2 or #3 Thickeners. The lateral pump transfers a percentage of the settled solids from the #1 clarifier to the #2 or #3 thickeners. Raising the lateral pump suction from the bottom of the #1 clarifier up approximately 15 feet results in a major improvement in the amount of calcium sulfate that is captured for recirculation back to the oxidizer. As a result of changing the position of the lateral pump suction, the heavier calcium sulfate now settles to the bottom of the #1 clarifier (for continued processing and gypsum recovery via the oxidizer tank), and the lighter inert materials are transferred to the #2 or #3 thickener for concentrating.

Decreasing the Amount of Unnecessary Blowdown from Scrubber Modules. In the past, when it was necessary to dump or blow down a module directly to the #1 clarifier (bypassing the oxidizer), this action would allow a high amount of sulfites to react with the sludge and consequently caused septic conditions. Later, to help keep the sludge from going septic under normal conditions, sodium hypochlorite (bleach) was fed on a continuous basis.

Plant operators found, however, that the demand for bleach during these septic conditions exceeded the capacity of the bleach feed system. Furthermore, shot feeding of high volumes of bleach only provided temporary relief. It was not unusual for septic conditions to exist for days or even weeks after excessive module dumping. The septic sludge would often be very difficult to dewater (often requiring twice the amount of polymer). Additionally, the septic conditions often prompted complaints from operators and neighbors.

Recently, however, after improving overall communications between FGD operations and the sludge dewatering contractor (Utter Construction), the number of septic situations has been reduced and virtually eliminated. Current practice is to notify the dewatering contractor in advance of module dumps and thereby avoid operating conditions that can lead to septic conditions, and treating with bleach as the condition occurs. 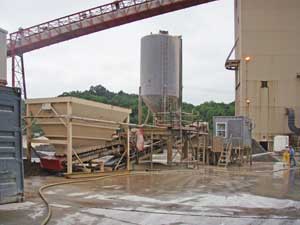 When the unit came back into operation after the spring 2007 outage, there was an immediate reduction in the number of tons of landfill material discharged from the centrifuge process. This reduction was directly related to the relocation of the #1 clarifier lateral pump suction (underflow take-off), the change in centrifuge technology, and the optimization of dewatering polymers. The amount of material sent to the landfill decreased from an average of 733.5 tons/day to 489.9 tons/day, which added up to an annual savings of $256,500 in landfill costs (Figure 4). 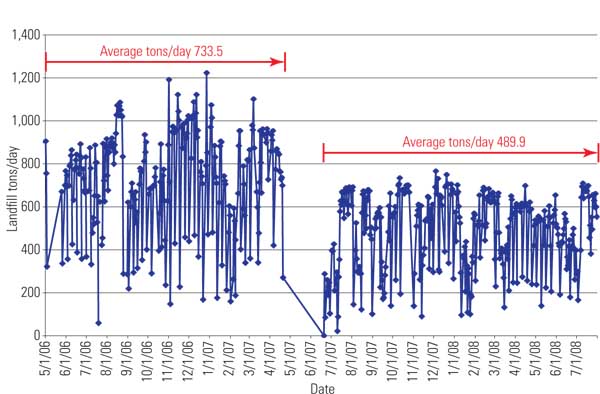 4.    A slowdown in sludge generation. This chart illustrates the number of tons of sludge sent by the  Zimmer Station to the landfill on a monthly basis during the evaluation period from May 1, 2006 through July 31, 2008. The numbers reveal a large overall reduction in the volume of sludge disposed during the last 12 months of the evaluation period. Courtesy: Duke Energy 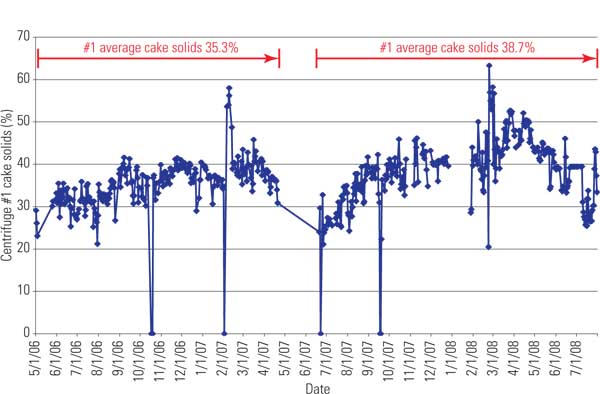 5.    A piece of cake. Switching to centrifuges with back drives led to a marked improvement in cake solids and polymer consumption. The data shown are from Centrifuge No. 1. Courtesy: Duke Energy 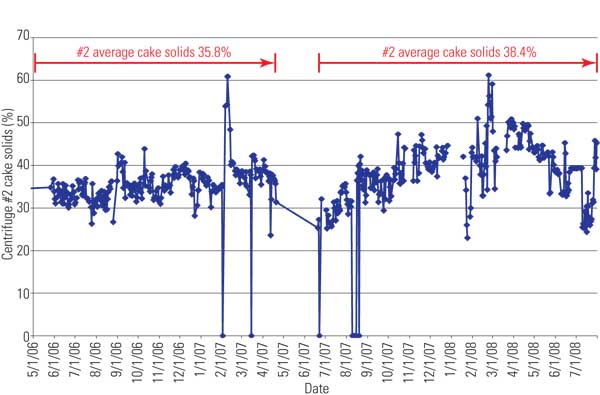 6.    A solid success. Cake solids improved approximately 3% during the evaluation period from May 1, 2006 through July 31, 2007. The data shown are from Centrifuge No. 2. Courtesy: Duke Energy 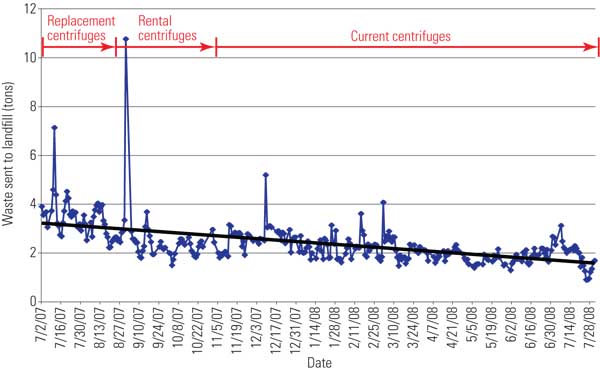 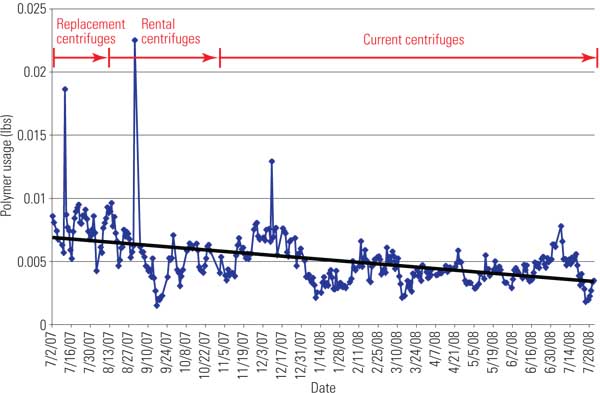 8.    Paring down polymer use. The reduction in polymer consumption translates into greater savings in operating costs. Courtesy: Duke Energy

Lime kiln dust (LKD) is added to the sludge as it is discharged from the centrifuges via a pug mill. LKD is used simply to increase the dryness of the sludge prior to shipping it to the landfill. Pebble lime performs the same function but is used on weekends in lieu of LKD to avoid the overtime associated with the pug mill operation. The pebble lime is mixed with the sludge by a front-end loader prior to loading the trucks for the landfill.

Table 1.    A money-saving move. By significantly reducing the number of tons of centrifuge solids sent to the landfill each year, the  Zimmer Station has been able to realize substantial savings. The dewatering process also avoids burning 2,800 gallons of diesel fuel. Courtesy: Duke Energy