Where there’s a will, there’s a way. While federal and state legislators and regulators debate the pros and cons of building more coal-fired power plants in the U.S., Japan quietly tripled its installed coal-fired generating capacity from 8,000 MW in 1988 to 23,400 MW in 2004. Significantly, the expansion was accompanied by a wholesale upgrading from supercritical to ultrasupercritical (USC) combustion technology. The average thermal efficiency of the 18 (mostly) USC plants that constitute the added 15,400 MW is an excellent 42%—a heat rate of about 8,125 Btu/kWh.

Gasifying coal and lower-grade fuels and burning them in a combustion turbine promises a further boost in thermal efficiency to 48%, or 7,109 Btu/kWh. For Japan, which lacks indigenous coal reserves, one of the big attractions of IGCC plants (beyond their ability to be retrofit for CO2 capture) is their ability to burn a wide range of imported coal feedstocks whose low fusion temperatures would wreak havoc on a conventional pulverized coal (PC) furnace. Other obvious advantages of IGCC combustion over PC firing are lower NOx and SOx emissions, a reduction in solid waste generated, and the need for less cooling water.

Developing a commercial IGCC plant has been on Japan’s national agenda for some years, and ongoing efforts will begin to pay off in coming years (Figure 1). In 1986, 11 Japanese corporations and nine regional utilities, the Electric Power Development Co., and the Central Research Institute of Electric Power Industry (CRIEPI) established the Engineering Research Association for IGCC Systems. Between 1991 and 1996, under the banner of the New Energy and Industrial Technology Development Organization (NEDO), the association successfully operated an entrained-bed coal gasification pilot plant rated at 200 tons/day (25 MW equivalent) for 4,770 hours. The longest continuous operating period was 789 hours. Additional technical data were acquired from a 24 ton/day gasifier at the Nagasaki R&D Center of Mitsubishi Heavy Industries.

Several additional gasification tests have been conducted since 1998 as design verification testing continued and the data needed to scale up and accurately predict the performance of the demonstration gasifier were obtained. Clean Coal Power R&D Co. Ltd. (CCP) was established in June 2001 to move the earlier NEDO-sponsored development program and the feasibility study results forward into a demonstration project phase. The same sponsors (with the exception of CRIEPI) are participating, and the Japanese government is subsidizing about 30% of the demonstration project’s development costs. The 250-MW "semi-commercial scale" demonstration project (Figure 2) will confirm plant reliability, operability, maintainability, safety, and economics. The final deliverable of the nine-year project will be a design certified for commercial power generation.

3. Blowin’ in the wind. MHI has selected an air-blown gasifier for its standard IGCC plant design. Source: MHI

Nonetheless, both GE and Siemens have elected to use an oxygen-blown gasifier in their reference IGCC plant designs. Siemens notes that because the technology produces a much lower volumetric flow of exhaust gas, downstream gas purification equipment can be smaller and less costly. Air-blown systems still must handle the nitrogen in the syngas, and doing so can make it more difficult to remove carbon pre-combustion. However, MHI is quick to point out that the absence of an air separation unit improves the overall efficiency of its design.

The design of the demonstration plant began in 2001, and an environmental impact assessment of it was submitted in June 2004. Construction began two months later at Joban Joint Electric Power Co.’s Nakoso Power Station in Iwaki City, Fukushima Prefecture. At press time, the demonstration plant was scheduled to come on-line in September 2007 and begin operational testing that will continue through 2009 or 2010. One of the goals of the demonstration is to confirm that the plant can successfully burn low-grade coals with low ash fusion temperatures and moisture content as high as 30%. MHI supplied the plant’s gasifier and desulfurization system, its steam turbine and gas turbine (a 130-MW MHI 701DA with a 2,282F inlet temperature), and its heat-recovery steam generator (HRSG). The company also provided all of the plant’s civil engineering and construction labor as the single turnkey contractor.

Blast furnace gas was only the appetizer

Natural gas isn’t the only fuel MHI’s combustion turbines can swallow. The company has completed a number of projects that use by-product gas from refineries or blast furnace gas from iron mills as turbine fuel. About 40% of Japan’s coal imports are consumed in iron mills, including those that produce petroleum coke, so improving the mills’ energy efficiency would significantly lower the country’s CO2 emissions. The remaining shadow of America’s steel industry might take a few pointers from these projects.

MHI’s experience with low-Btu gases dates back to 1958, when an 850-kW gas turbine burning blast furnace gas (BFG) was commissioned as a prime mover for a blast furnace blower at Yawata Steel Corp. (now Nippon Steel Corp.). This project was followed by a larger unit (4,000 kW) delivered in 1964 to Yawata. In 1965, MHI delivered the model MW171 gas turbine (15,000 kW) to Sumitomo Metal Industries, Ltd.’s Wakayama Works. Many other projects followed that burned unconventional fuels such as coke oven gas and hydrogen-rich refinery gases.

The latest MHI plants that can burn low-Btu gases have designs based on F-class technology and firing temperatures. For example, a 431-MW IGCC plant that burns vacuum residual oil gasification syngas and has a turbine inlet temperature of 2,462F was commissioned in 2003 in Yokohama, Japan (see box, "Size matters—but less than availability"). This plant was followed by an MHI 701F turbine at Kimitsu Cooperative Thermal Power Co. (Figure 6) that operates at an inlet temperature of 2,372F and is the first F-class turbine to burn BFG at a thermal efficiency of 50% (LHV).

This plant marked the debut of a multicannular combustor with an air bypass valve. It allows low-Btu gases to be burned over the turbine’s entire operating range, from start-up to full load, with low NOx emissions and no need to inject steam or water into the combustor. Other design innovations include:

According to MHI, as of the end of 2006 its 12 turbines worldwide (totaling 1,520 MW) that burn BFG and similar, low-Btu gases have accumulated 1 million operating hours. Since then, another 16 units configured to fire low-Btu gases and totaling 1,788 MW either have been commissioned or are under construction

The road to a commercial IGCC plant design passes two mileposts: choosing a gasifier type and redesigning the combustion turbine(s)’ fuel systems to handle large volumes of low-Btu fuel (Table 1). Although the final commercial design will differ in the details, we can get a good feel for how it will work by examining the internals of the demonstration plant (Figure 4).

The air-blown gasifier converts pulverized coal to synthesis gas (syngas). Char in the syngas is removed in a cyclone and porous filter, while H2S is removed in a desulfurization unit. Air for the gasifier is extracted from the combustion turbine’s compressor. The design of the gasifier must deal with melting ash. The gasifier has a membrane waterwall that eliminates the need for a problematic refractory lining.

MHI’s two-stage approach to gasification relies on a combustor that burns coal and recycled char at high temperature at a high air/fuel ratio, and a reductor that uses the combustor’s hot gas output for gasification, lowers the level of unburned carbon in the ash, and smoothly discharges molten slag. The hot gas leaving the reductor is cooled by an internal gas cooler/steam generator integrated into the HRSG. Any char in the syngas is separated out by the cyclone or porous filter and recycled to the combustor. According to MHI, the carbon conversion efficiency of the system is 99.8%.

The porous filter is the final dust removal step before the exit gas enters a commercial methyl-diethanol-amine (MDEA) and carbonyl sulfide (COS) converter/acid gas– removal system. This unit essentially washes the syngas to remove sulfur and trace elements. It sends the sulfur in the form of H2S to the sulfur conversion/recovery unit, where it is oxidized and absorbed in a high-performance limestone-gypsum unit that produces high-grade, saleable gypsum.

The MHI 701DA-type combustion turbine was selected for the demonstration plant based on its good track record in combined-cycle and other low-Btu fuel gas projects. MHI notes that with syngas projects, additional fuel mass flow is required to provide the turbine with the necessary energy content—about 17% of airflow compared to about 2% for natural gas. However, a fully integrated IGCC plant uses about 15% of the compressor’s discharge to power the gasifier. For this reason, the MHI turbine is closely balanced for mass flow moving through the turbine section of the unit; only the compressor casing had to be modified to include an air extraction port.

Believe it or not, Nippon Petroleum Refining Co.’s 431-MW (gross), 342-MW (net) Negishi Plant in Yokohama, Japan, is the largest IGCC plant in operation today (Table 2). The oxygen-blown plant, which entered commercial service in June 2003, uses vacuum residual (VR) oil as its main fuel. VR is basically very heavy oil, like refinery asphalt, and it is one step removed from petroleum. The entire output of the plant (Figure 7) is purchased by Tokyo Electric Power Co. 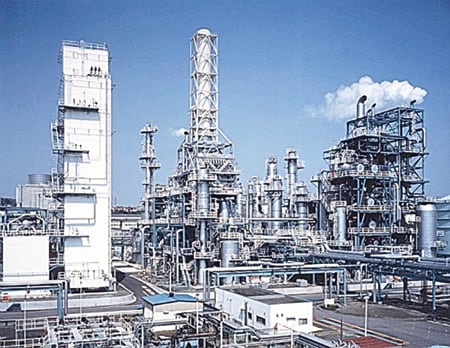 7. Still the king. The 342-MW (net) Negishi IGCC plant, at a refinery in Yokohama, Japan, is the world’s largest facility of its kind. Courtesy: National Energy Technology Laboratory

The facility uses a GE Direct Quench gasifier and is configured with syngas cleanup equipment, an MHI F-class combustion turbine with an inlet temperature of 2,462F, an MHI HRSG, and a selective catalytic reduction system designed to limit emissions of NOx and SOx to 2 ppm. The facility employs an advanced system to remove 99.8% of the sulfur in the syngas. Kerosene may be used for start-up and during emergencies.

Results for subsequent years were not available.

The future, fully commercial plant will likely use MHI 501G(s) with a 2,732F inlet temperature. My guess is that by 2010, MHI will be able to offer, on standard commercial terms, a complete 500-MW to 900-MW IGCC plant design capable of burning bituminous coal, Powder River Basin coal, or just about any low-rank fuel (see box, "Blast furnace gas was only the appetizer,"). The first unit of this design could enter service as soon as late 2012 (Figure 5). That may be a year or two later than the first commercial IGCC plant to enter service in the U.S. However, public utilities would be wise to focus less on being first and concentrate more on the performance, availability, and reliability of the early IGCC units. Accordingly, MHI is just as wisely committed to following a rigorous product development process that will prevent any product from being marketed before it is ready for prime time. 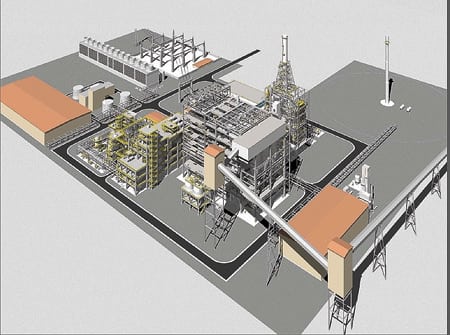 Expect to see a blistering 46% plant thermal efficiency (a heat rate of 7,417 Btu/kWh) using the MHI M501G or M701G, a 15% improvement over the latest round of USC plants installed in Japan. Emissions will be equally impressive, with SOx < 0.06 lb/mmBtu and NOx < 0.03 lb/mmBtu. Reductions of 15% to 20% in CO2 emissions also come along for the ride, and more because of its system’s feasibility in coupling with CO2 capture technology.