Lünen hard-coal–fired power plant, located on the Datteln-Hamm Canal in the state of North-Rhine Westphalia, Germany 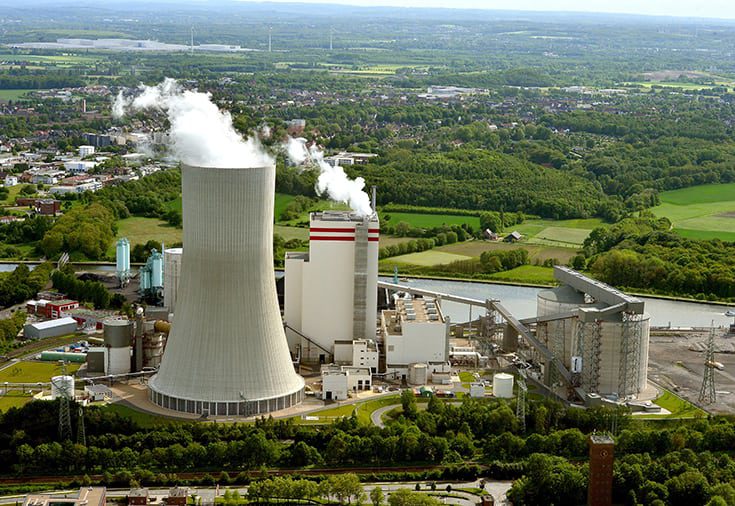 German officials on Aug. 28 approved a plan to spend as much as €40 billion ($44.4 billion) over the next 20 years on projects designed to lessen the impact of the country’s complete move away from coal-fired power generation.

Peter Altmaier, the country’s economy minister, said the money will become available after lawmakers pass legislation to finalize the terms and timing of Germany’s exit from coal. Those details are expected to be worked out over the next few months.

Officials said the funds would be used to support transportation infrastructure and increase access to broadband communications. The plan also includes locating research institutes and federal offices in areas impacted by the shutdown of coal plants. Some of the money is earmarked for areas with black coal-fired power stations.

A government-appointed panel in January recommended Germany end all coal-fired power generation no later than 2038, citing the impacts of coal generation on climate. The country generates more than a third of its power from coal. The country’s last deep-shaft black coal mine closed in December 2018.

However, open-cast lignite, or brown coal, mines are still in operation. Lignite is considered dirtier than black coal but remains relatively cheap to extract.

A study commissioned by the economy ministry of Germany’s most populous state, North Rhine-Westphalia, and carried out by the Institute of Energy Economics (EWI) at the University of Cologne, reported Tuesday that the country’s recommended paths to end coal-fired power would enable Germany to hit national emissions reduction targets from power generation by 2030.

The recommendations on phasing out coal-fired generation, announced earlier this year, include retiring 12.7 GW of coal capacity by 2022, with another 13 GW to 17 GW shuttered by 2030.

Germany in 2014, three years after the disaster at Fukushima in Japan, said it would close all its nuclear power plants by 2022. The World Nuclear Association said Germany receives about 12% of its total power supply from the country’s seven nuclear reactors.

Germany today produces more power than it needs and exports the excess to neighboring countries. There are concerns that the country’s move toward more renewable power generation will not be able to replace its current generation, particularly for the country’s energy-intensive manufacturing sector.

Germany’s Alliance 90/The Greens party, widely known as simply “Greens,” in a statement questioned the timing of Wednesday’s move. It said the plan is premature since details of the country’s exit strategy from coal, including the order in which plants would be closed, have not been finalized.

“Just dispensing billions a few days before the state elections in Brandenburg and Saxony without at the same time approving the exit from coal doesn’t bring planning security,” party co-leader Annalena Baerbock said. “It leads to further uncertainty.”

Altmaier on Wednesday said the government is organizing a coal exit strategy “that gives the regions hope, that gives people prospects, that shows we are leaving no one on their own and that the federal government is aware of its responsibility.”