The regional transmission organization’s (RTO’s) base residual auction (BRA), whose results were released on May 23, cleared a total 163,627.3 MW of unforced capacity for the period spanning June 1, 2021, to May 31, 2022. That represents a 22% reserve margin for PJM’s footprint, which extends over 13 states and the District of Columbia.

Clearing prices, which varied by locational deliverability area (Figure 1), soared between 44% and 82% higher than last year. While last year’s 2020/2021 base residual auction produced a dismal price of $76.53/MW-day for most resources in PJM’s footprint—prompting alarm from baseload generators, and especially those who own or operate coal and nuclear plants, that compete in the wholesale market—Wednesday’s auction produced a price of $140/MW-day. 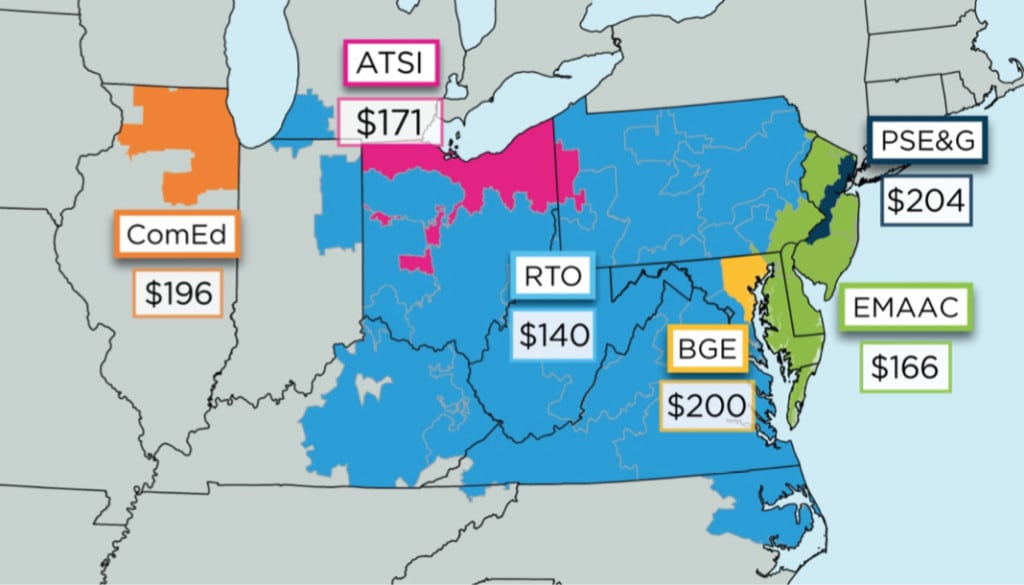 According to Stu Bresler, PJM’s senior vice president for operations and markets, prices in this year’s capacity auction were higher than last year (Figure 2) mainly because energy prices continue to decline, prompting generators to seek revenues in the capacity market through higher offers.

In a call with reporters on Wednesday, Bresler also said an increase in the reference resources cost resulted in a general decrease in energy revenues and an adjustment for inflation. He also pointed to a decrease in total cleared capacity, and noted the auction saw a lower number of new generators.

PJM reported a total of 11,126 MW of demand response cleared in the auction—an increase of 3,305 MW compared to last year’s auction. A total of 3,832 MW of energy efficiency also cleared, an increase of about 1,100 MW.

Demand response and energy efficiency can either bid as an annual resource, or if they can produce power seasonally, they can bid aggregated with another resource to meet PJM’s performance standards. Bresler noted this is the second year that PJM is requiring 100% capacity performance resources. “So there’s no longer a base category of resources that only need to perform during part of the year.”

Meanwhile, a total of 1,417 MW of wind cleared in the auction, 529 MW more than last year, and solar increased “more than fourfold,” with around 570 MW clearing, Bresler said. “If you take the wind assets that actually cleared this auction and convert their cleared capacity value into an approximate nameplate—so what they can produce as far as energy is concerned—you get about 8,126 MW of nameplate capability of wind,” he said. “That is an increase from 6,719 MW last year.”

Solar had a bigger increase on a percentage basis, he noted. “If you, given the intermittent nature of these resources, convert that 570 MW into an approximate nameplate value, it’s about 1,641 MW of nameplate solar capability, compared to 677 MW last year.”

Compared to last year, the auction also cleared 500 MW more coal generation and 1,000 MW of more gas-fired generation, including a new 600-MW combined cycle gas turbine plant. For both coal and gas, Bresler said some “fairly large plants” that cleared last year did not clear this year. However, this year, PJM also saw increased cleared capability of existing coal units. “I think what that may speak to is improvements in efficiency at those plants that are making them more competitive,” he said. “I think they’re real close right now in some cases, to natural gas. Coal plants that have larger capabilities—that can operate efficiently, that have made the environmental upgrades that are necessary—hung in there this year,” he said.

“What this auction showed is … the death of coal has been greatly exaggerated,” he said.

Nuclear, however, fared much worse than it did last year. It cleared 19,900 MW—which is about 7.4 GW less than last year.

“I don’t think this came as much of a surprise to the market in general,” Bresler said. “If you had a look at any of the analyst reports that were coming out ahead of the release of the auction results, I think there were expectations that we would see a reduction in the cleared nuclear capabilities in this auction.” However, the value that failed to clear was “actually less than some analysts’ expectations,” he said.

Exelon on Thursday noted that the auction marked the fourth consecutive year that the Three Mile Island nuclear plant in Pennsylvania failed to clear. The plant has not been profitable for six years owing to “persistently low wholesale energy prices and market rules that treat polluting plants the same as emissions-free sources of power,” it said. The company has lobbied lawmakers in the state to help keep the plant open. The state in March 2017 convened a nuclear caucus—as the first of its kind in the nation—to specifically advocate for keeping Three Mile Island open through subsidies or other measures. However, “Those efforts have yet to produce any solutions that will prevent the planned premature retirement of [Three Mile Island] in October of 2019,” Exelon said.

According to Exelon, nuclear’s woes spread far beyond Pennsylvania. “Across all of PJM, 10,643 megawatts of nuclear capacity did not clear in the auction, compared with 3,243 megawatts that failed to clear last year. This represents the largest volume of nuclear capacity ever not selected in the auction,” the company noted. The results underscore an “urgent need for policy reforms to resolve acknowledged flaws in market rules that fail to properly value the resilient, zero-emissions power provided by nuclear plants,” it said.

Exelon’s other nuclear plants in PJM cleared the auction, including Quad Cities in Illinois, which fared well “as a result of Illinois legislation that fairly compensates certain nuclear plants for their environmental attributes,” it said.

Kathleen Barrón, Exelon’s senior vice president of Government and Regulatory Affairs and Public Policy, said in a statement that Exelon’s nuclear plants fared badly owing to “long-standing market flaws” that put nuclear energy at risk. Though Dresden and Byron are in Illinois, along with Three Mile Island, they are “economically challenged” because “the way energy prices are set in PJM does not compensate them for their unique contribution to grid resiliency and their ability to produce large amounts of energy without harmful carbon and air pollution,” said Exelon.

For now, at least, Dresden and “but a small portion of the Byron nuclear plant” which did not clear the auction are not at risk of early retirement. “Both plants have capacity obligations that continue through May 2021 and May 2022, respectively,” the company said.