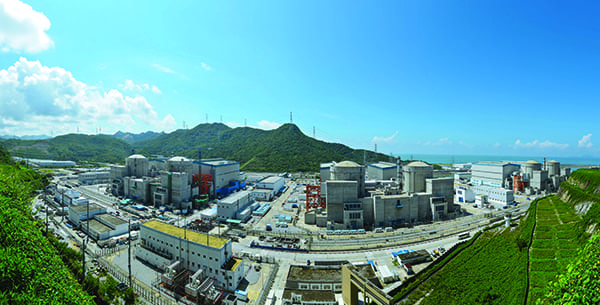 Completion of the first ACPR1000 reactor at Yangjiang 5 within a mere 58 months marks a major achievement for China’s lengthy efforts to commercialize the first-of-its-kind 1,000-MW evolutionary third-generation nuclear reactor.

In the 25 years since China imported 944-MWe M310 nuclear reactor technology from France for its first mainland nuclear units at Daya Bay in Guangdong province, the country has installed a stunning 47 nuclear power reactors. CGN Power, a subsidiary of China General Nuclear Power Corp. (CGN), has been on the leading edge of China’s efforts to rapidly expand its nuclear sector for environmental and economic reasons. When it was incorporated in 1994 to manage Daya Bay, CGN was held equally in majority by Guangdong’s provincial government and state-owned China National Nuclear Corp. It has since morphed into a massive publicly offered entity that is manned by 39,000 employees. Today CGN says it is both China’s largest nuclear power operator and the largest builder of nuclear power plants worldwide.

On July 12, 2018, the company marked an achievement that crowned its 30-year experience in nuclear research, development, and operation: It wrapped up the 168-hour trial operation of the world’s first ACPR1000 at Unit 5 of the Yangjiang Nuclear Power Plant, and deemed it commercially operational. 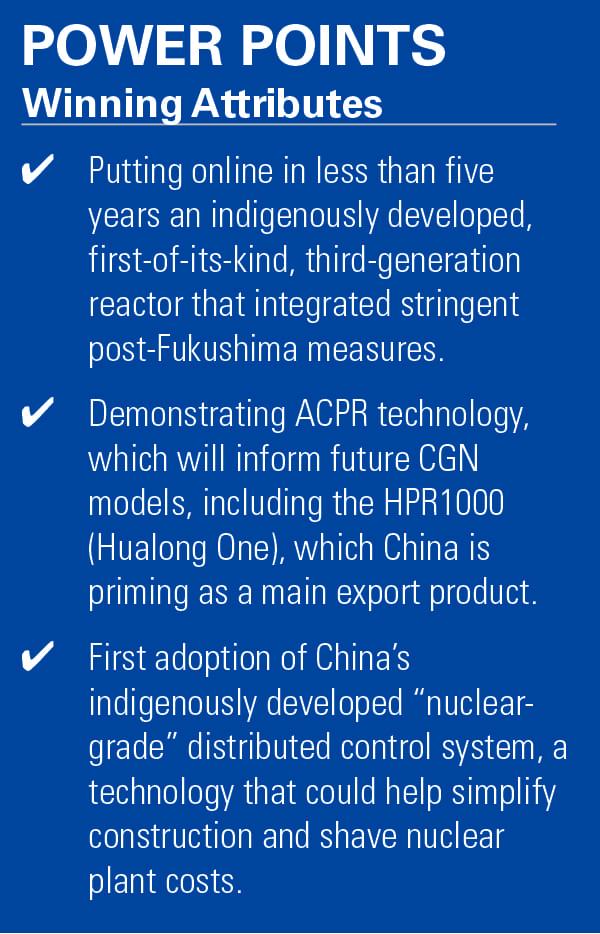 In 2005, the state mandate prompted CGN to develop and install the world’s first 1,000-MW CPR1000 at China’s 12th nuclear unit, Ling Ao Phase II (Unit 3) in Guangdong province, a project it completed within just 54 months, in September 2010. The CPR1000, an “improved Chinese pressurized water reactor” technology, is a significantly upgraded (Generation II+) version of the Framatome-derived M310 technology imported for Daya Bay, and it features digital instrumentation and control, and a design life of 60 years. “Now, CPR1000 has become the dominant technology in Chinese batch construction nuclear market,” said CGN. Since Ling Ao, CGN has built four CPR1000s at Hongyanhe, four others at Ningde, two at Fangchenggang, and two at Yangjiang, it noted.

But Yangjiang, in particular, has since evolved into a major nuclear showcase for CGN. According to Yangjiang Nuclear Power Co., a CGN subsidiary that built and manages the 6-GWe plant, while the Yangjiang 1 and 2 CPR1000s were being completed (they came online in March 2014 and June 2015), CGN made 28 additional safety and technical modifications to the CPR1000 reactor design, and implemented a new model, the “CPR1000+,” at Units 3 and 4. The improvements allowed Yangjiang to build the new reactors more speedily: The first CPR1000 Unit 1, for example, took 63 months to complete, while the first CPR1000+ Unit 3, which came online in January 2016, took 61 months.

In the wake of the March 2011 Fukushima disaster, China implemented a new national nuclear development strategy and safety requirements, and CGN again deliberated and proposed several new modifications to the CPR1000+. “These modifications were obtained from several aspects, such as conformance analysis with the current international rules and standards, Probabilistic Safety Assessment (PSA) result, [and] experience feedback from Fukushima nuclear accident,” it said. They included a diverse actuation system, a long-term heat removal system, a secondary passive heat removal system, and a passive reactor pit flooding system.

In tandem, CGN also moved to prepare the new model—which it called the “Advanced Chinese Pressurized Reactor” (ACPR1000)—for export. Compared to the CPR1000, for which Framatome, a company majority owned by the French government, retains intellectual property, the ACPR1000 has full Chinese intellectual property rights, it explained. CGN initially intended for the three-loop ACPR1000 PWR reactor design with double containment and a core-catcher to be demonstrated at Fangchenggang 3 and 4, but Yangjiang, which hosted the first CPR1000+ reactors, proved better suited to debut and refine the first ACPR1000s, it said.

Construction on Yangjiang 5 began in September 2013 and was completed in July 2018—within 58 months. The timeframe is especially remarkable for completion of a first-of-a-kind reactor when it is considered that the average time for new reactor builds in 2018—a year when several other first-of-their-kind reactor models like the AP1000, EPR, and VVER-1200 were completed—was 103 months, according to the World Nuclear Association.

Yangjiang Unit 5, specifically, “achieved technical improvements on 31 items based on previous reactor designs, and meets up-to-date technical safety standards,” the company noted. A second ACPR1000 at Yangjiang 6, whose construction kicked off in December 2013, was also completed in July 2019, though it is unclear why that unit took nearly nine months longer to build. However, Yangjiang Nuclear Power Co. noted construction of the full project was completed as expected, and said that, at present, overall safety and quality of the giant plant are “all in good condition.”

Owing to lessons learned at Yangjiang, several ACPR1000s are now under construction at CGN’s Hongyanhe 5 and 6, and Tianwan 5 and 6, and all are scheduled to come online between 2019 and 2021. But CGN noted Yangjiang has also been pivotal in development of another third-generation reactor design—the HPR1000 (or Hualong One)—which China is priming as a main export product. CGN is currently building two Hualong One reactors at the Fangchenggang plant in the Guangxi Autonomous Region, and it expects the units to start up in 2019 and 2020. HPR1000 will also be the basis of the Bradwell B project in the UK, though construction is predicated on technology reviews and isn’t expected to begin until 2025.

A Digital First for China

Another noteworthy feature at Yangjiang 5 is that it adopts a “nuclear-grade” distributed control system (DCS) known as FirmSys, which was developed by China Techenergy Co. (CTEC), a CGN subsidiary. It is China’s first nuclear safety DCS platform with independent intellectual property rights, and it makes “China the fourth country to have mastered the core technology, following the United States, France, and Japan,” CGN noted.

The technology, which serves as a universal platform for the nuclear-class DCS, akin to a nuclear plant’s “central nervous system,” is “highly complex,” but it has “strict quality standards” and high identification requirements, which have been vetted by the International Atomic Energy Agency, TÜV, and ISTec, the company said. “Because all software codes, especially the operating systems and communication networks, are completely indigenous, and all hardware products are purchased independently, it allows systems to be independently integrated and tested, and information security products with in-depth multi-layer defenses to be adopted,” explained Jiang Guojin, CTEC’s general manager. “Thus, FirmSys can not only effectively prevent external attacks from the internet, but also can ensure that the control system is completely in domestic hands.”

CTEC said it delivered the nuclear-grade DCS equipment to Yangjiang (Figure 1) in November 2016 (where it was installed within 26 months) after spending two years on a $15 million prototype project to ensure the integrity of the platform functions, and product reliability and performance.

According to Jiang Dajin, general manager of Yangjiang Nuclear Power Co., the project was treated as a key priority. “We intervened early in the testing phase and worked together with their test team for nearly a year,” he said. FirmSys successfully passed many tests, including a cold test, a hot test, and fuel loading, and ultimately it provided “an important guarantee for the realization of several of Unit 5’s major engineering milestones,” he noted.

Owing to CTEC’s success at Yangjiang, FirmSys is being installed at China’s Shidao Bay high-temperature gas-cooled reactor, as well as at CGN’s Hongyanhe, Tianwan, and Fangchenggang sites. CGN claims it can shave 3 billion yuan ($424 million) off nuclear construction costs. “[The] DCS has always been a critical path for nuclear power projects. The project period is difficult to control,” it explained. “If a gigawatt-level nuclear power unit is one day behind schedule for operation, the loss will be as high as nearly 10 million yuan [$1.4 million].”

Success at Yangjiang has also prompted CTEC to explore global opportunities. Last year, it said, the company installed FirmSys on an Algerian nuclear power plant, and the DCS system is under review by UK authorities, as part of the Hualong One generic design assessment. The prospect opens up vast new business avenues for China, it said. ■