The familiar saying "as goes California, so goes the nation" seems to apply to the many states that have been unable to invest in infrastructure improvements because they are crushed by debt and shrinking revenues. Will California and energy project developers continue to invest in energy infrastructure in 2010 given the limited availability of private capital, shaky state finances, and shifting regulatory climate?

How’s this for an overused statement: The U.S. is in the middle of an infrastructure crisis. That is hardly news, but it is true. What is news, however, is that the pressure to repair and expand our nation’s inadequate infrastructure is now being addressed through a variety of new financing mechanisms and the passing of new legislation. The jury is out as to whether such efforts can be successful given today’s tight financial markets, but it’s a start.

Overburdened infrastructure is failing across the country. In Los Angeles, home to the largest wastewater infrastructure system in the nation, more than 4,500 separate overflows of sewage spilled onto the streets between 1994 and 2004, racking up billions of dollars in clean-up expenses. The American Society of Civil Engineers 2009 Report Card gave California’s infrastructure an average grade of C – and estimated yearly investment needs at $37 billion. California’s financial crisis appears to be the worst among the 50 states. Consider these facts:

The consensus at the conference was that the U.S. is also in the middle of another Great Recession. Every economic indicator from retail spending to the stock market is pointing to a jobless, muted recovery. The unemployment rate rose from 9.8% to 10.2% in October. The current Great Recession has depleted taxes and other municipal resources. Road improvements and maintenance are not being undertaken because funds are just not available. Raising taxes in California remains an unpalatable option given the high unemployment rate and existing tax burden compared to other states (Figure 1). California’s average annual property tax payment leads the western states at $2,278 (compared to $1,133 for Arizona and $1,445 for Nevada) but remains less than the average $3,076 in New York and $2,974 in Massachusetts.

California’s approach to enhancing infrastructure has been to take the matter to the voters. California citizens expressed a desire to move infrastructure projects forward in November 2006 when voters approved over $42 billion in general obligation bonds. Those bonds were for funding transportation improvements and repairs, expanding local transit, upgrading freight transportation corridors, repairing levees, and ensuring safe drinking water and current water supplies. In November 2008, City of Los Angeles voters approved Measure R, committing a projected $40 billion to traffic relief and transportation upgrades throughout Los Angeles County over the next 30 years. However, the expenditure of funds did not really start until after passage of the American Recovery and Reinvestment Act (ARRA). ARRA, passed in February 2009, took a long-awaited first step to rebuilding our public systems by allocating $51.2 billion to "core infrastructure investments."

According to California Treasurer William Lockyer, who spoke at Dollars and Dirt, the fundamental problem California faces is that the state has grown so fast and neglected infrastructure investments for so many years that current infrastructure cannot accommodate the anticipated 50 million people who will be living in California by 2020. Stark deficits exist, and the traditional methods of financing infrastructure construction are not working in the short term, as there is no available capital to put into the system for construction.

Lockyer stated that California will continue efforts to pass general obligation bonds. But general obligation bonds and the associated debt service will only add to California’s $38 billion structural deficit. Lockyer estimated that 10% of the state’s liabilities are dedicated to debt service, meaning that 10% of all dollars from the state’s general fund are going to pay debt service on existing obligations rather than being put into the system for capital improvements. It was the treasurer’s hope and desire that the state build into the budget process more long-term planning and capital expenditure priorities so that infrastructure spending is not an afterthought. From BABs to California Senate Bill No. 375, which focuses on transit-oriented development, there are major efforts to bring infrastructure to the foreground.

There was, during Dollars and Dirt, mention of the legislative initiatives passed by the State of California to assist with public-private partnerships and infrastructure construction.

There are good examples where a streamlined financing model shows promise. For example, one of the measures in the Golden State, California Assembly Bill No. 798 creates new local credit pools for transportation financing. AB 798, signed into law on October 11, 2009, established the California Transportation Financing Authority (CTFA) to assist transportation agencies in obtaining financing, primarily through issuing bonds backed by specified sources of revenue, to construct transportation projects. In doing so, AB 798 allows the authority to permit agencies to impose tolls for use of facilities constructed. This bill establishes the CTFA within the Office of the Treasurer and specifies the membership of the seven-member authority. The CTFA’s objective is to increase transportation capacity or improvements in a manner consistent with the state’s greenhouse gas reduction goals, air quality improvement goals, and natural resource conservation goals through the issuance of bonds that are backed by specified transportation-related revenues.

These local credit pools and the mandate of the CTFA create a streamlined process that may prove effective for infrastructure. Financing and planning decisions are made at the local level through a centralized hub, allowing local agencies to figure out what they want to do with respect to the policies to create a new credit that they can use to help accelerate financing and development.

California Senate Bill No. 4 is another measure that should help put infrastructure in place. It was signed into law in February 2009. This bill provides limited expansion of design-build contracting authority to additional state facilities and to redevelopment agencies. The bill authorizes up to 15 design-build transportation projects, under prescribed circumstances, and allows the California Department of Transportation and local and regional transportation agencies to enter into an unlimited number of public-private partnership agreements until January 1, 2017. Additionally, redevelopment agencies are authorized through January 1, 2016 to use design-build contracting for building projects in excess of $1 million.

Dollars and Dirt recognized the big pools of money available for financing infrastructure projects. For example, Kathleen Brown, former California state treasurer and now Goldman Sachs’ public finance managing director, stated that the focus has shifted toward infrastructure as an acceptable investment for pension funds, private equity players, and real estate investment trusts (REITs). Furthermore, the municipal market is paying renewed attention given the federal government’s Build America Bonds Initiative. According to the panelists, CalPERS and CalSTERS (pension funds) are beginning to make significant allocations, as are many private and public pools of money.

It was made clear that the capital markets are beginning to rekindle. Last year financing for any asset class, let alone large-scale projects, was difficult. Now, particularly for deals under $1 billion, banks are coming back into the market. The expectation is that banks will be back in the infrastructure space next year and into 2012.

The panelists also discussed the correct pricing of infrastructure deals two to three years ago versus today. Bernard Carroll of Macquarie argued that, both domestically and globally, older deals were not priced correctly. Funds were buying infrastructure assets at real estate cap rates that were extraordinarily low, assuming growth rates that were extraordinarily high. The correct risk-adjusted return is in flux.

A political consensus is developing that certain large-scale public/private projects are probably doable. In 2004, $4 billion were raised for global infrastructure funds; in 2005, $8 billion. Between 2006 and 2008 $90 billion were raised — $37 billion in 2008 alone. Not a lot of that capital was expended. That probably leaves about $40 billion or $50 billion sitting on various funds’ balance sheets today.

There are now 92 infrastructure funds, most of them first-generation ones (funds that are investing in infrastructure for the first time). One of the challenges facing these funds is what each fund’s investment characteristics will look like. Some are short-term focused. Some are more long-term focused. Some will only invest in "hard" infrastructure assets such as toll roads. Some seek to buy a utility or waste management company that has been less-than-optimally managed. These funds team with operators to right-size and capture efficiencies, seeking an exit in three to four years. However, the return-on-investment hurdles are typical private equity returns in the high teens to 20% per annum.

As was shared at Dollars and Dirt, federal, state, and local governments are taking steps to stimulate the economy and figure out ways to alleviate the stress on our infrastructure by pursuing multiple sources of capital, such as:

The opinion of conference attendees was that, although there are many options available to increase funding for infrastructure, there are really only four viable options (Figure 2). 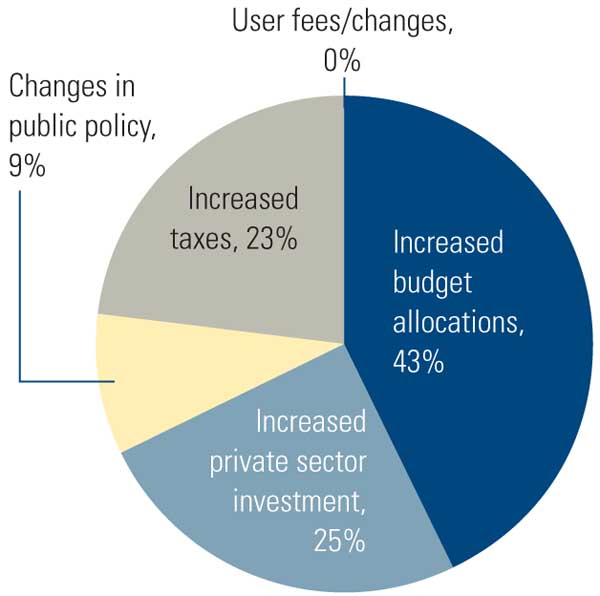 2. Survey question 1. What is the most viable source of increased funding for infrastructure? Source: Goodwin Procter LLP

In conjunction with Dollars and Dirt, Goodwin Procter also conducted a survey of 100 political officials and business executives to obtain their views on the impact of infrastructure, the effectiveness of ARRA, and the priorities for investment in new infrastructure. Key findings include these: 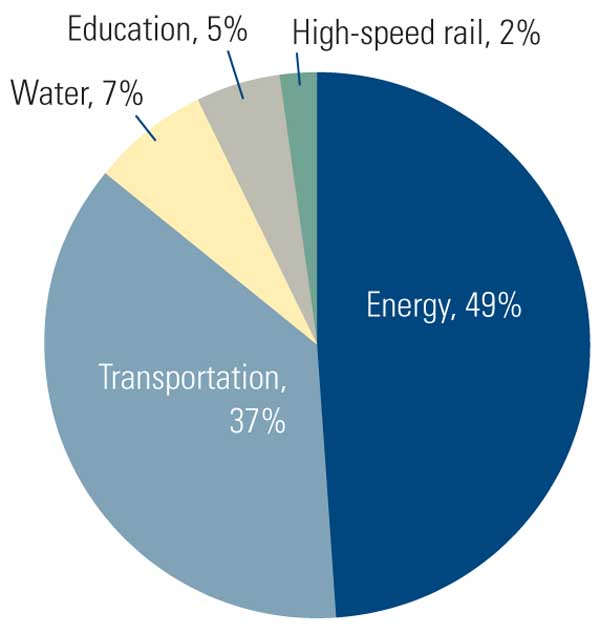 3. Survey question 2. What sector do you expect will receive the most capital over the next two years? Source: Goodwin Procter LLP 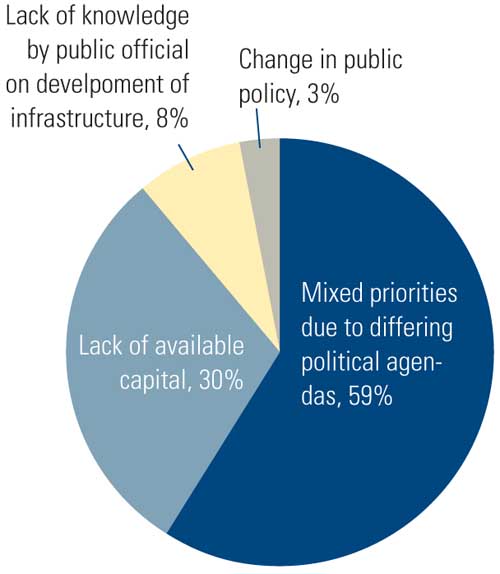 The question now becomes, How is money to be deployed? There do seem to be assets that are attractive to the marketplace and a need to raise cash on the municipal level. It appears that AARA and several state Senate and Assembly bills have primed the pump for new infrastructure investment. One important policy question is whether federal, state, and local governments can effectively prioritize spending in short order to further the deployment of stimulus money for infrastructure. Private capital is also ready to invest in infrastructure where returns meet high hurdles. Only time will tell whether private capital and public investment will ultimately stand side-by-side as infrastructure funding sources.