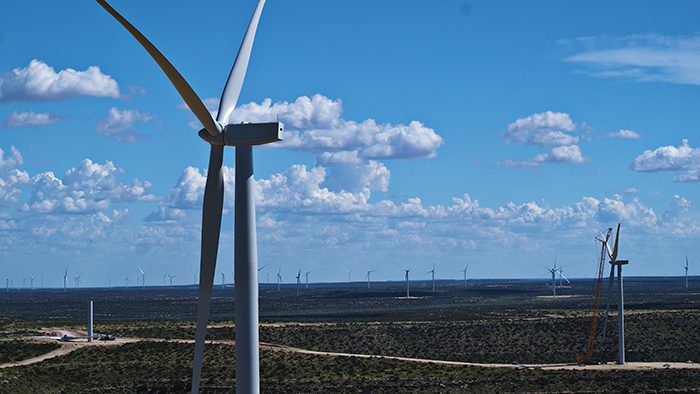 A major wind farm sited on 200 square miles across two Texas counties is part of that state’s commitment to renewable energy, part of an energy transformation in a region once known for its oil boomtowns.

The plains of West Texas for years have been featured as the backdrop for numerous Hollywood movies, whether the plot centered around the region’s oil wells, its cattle ranches, high school football or dusty baseball fields, all with sweeping vistas stretching to the horizon. Those visuals remain, but in recent years the area has also become known for its renewable energy resources, particularly the soaring blades of wind turbines that have made Texas the nation’s top state when it comes to producing wind power.

The region’s wind farms are creating their own stories, continuing to cement Texas’ legacy as a global energy giant. The High Lonesome Wind Farm, a project near the small town of McCamey, population about 2,000, in an area that state lawmakers call the “Wind Energy Capital of Texas,” provides a model for Texas’ renewable energy renaissance. The wind farm has brought the rebirth of an oil boomtown, uplifting a community by providing not only energy but also supporting investments that benefit local residents, farmers, and ranchers.

High Lonesome, located across 200 square miles in Upton and Crockett counties in Texas—about 290 miles northwest of San Antonio, and 120 miles west of San Angelo—is a 500-MW installation, one of the largest operational wind farms in Enel Green Power’s portfolio. The project is known for its positive impact on the rural area around the wind farm, and also for its innovative corporate power purchase agreement (PPA) that supports Danone North America’s commitments to sustainable business practices. High Lonesome is a model for other successful wind power and renewable energy projects, and is being honored with a POWER Top Plant award in the renewable energy category.

Construction of the High Lonesome wind farm began in January 2019; the first 450-MW portion of the project came online in December 2019, with the remaining 50-MW portion starting up in May 2020. The 50-MW expansion is supported by a 12-year PPA with food and beverage company Danone North America, one of the project’s innovative financial strategies.

“High Lonesome, including its 50-MW expansion, our PPA with Danone, and construction of an additional 57-MW battery storage facility, underscores our commitment to development in Texas and decarbonizing the local grid,” said Imanol San Martin, head of Wind Operations and Maintenance at Enel Green Power in the U.S. and Canada.

Enel Green Power North America in May of this year announced it has started construction on several new renewable energy projects in the U.S., including a battery energy storage system at High Lonesome, along with a similar storage system at its Roadrunner solar farm in Texas.

Other projects, including elsewhere in Texas along with Illinois and Oklahoma, mean Enel this summer has been working on more than 2.3 GW of new generation capacity, along with more than 600 MW of battery storage capacity.

“We are proud to support rural communities across the Lone Star State by investing in new projects that create jobs and revenue for schools,” said San Martin. “Furthermore, by constructing eight utility-scale batteries this year, we are deploying state-of-the-art storage technology to support a more resilient power grid.”

High Lonesome has 164 wind turbines (Figure 1). A specification sheet for the project from The Wind Power, a group providing market intelligence on wind energy, lists the majority of turbines as Acciona AW-3465/132 and Acciona AW-3000/132 models; Acciona is a renewable energy developer and global wind turbine manufacturer headquartered in Spain. Other turbines used in the project are GE Renewable Energy 2.3-116 models.

“Investment in the construction of the 500-MW plant amounted to around $720 million,” said San Martin. Enel on its website notes that lease payments for the project are expected to top $90 million, with local tax revenue of more than $75 million, over the lifetime of the project.

The project has focused on sustainability. During construction, field offices used water dispensers and reusable canteens to reduce single-use plastic water bottle use. Paper, cardboard, aluminum, ink cartridges, oil, and grease were recycled responsibly, according to Enel. Solar-powered lights were used during construction, and a solar photovoltaic system was designed for use by the permanent operations building.

“The construction of High Lonesome was completed in alignment with Enel Green Power’s Sustainable Construction Site model, which is a framework aimed at minimizing the impact of plant construction on the environment, waste, water and people,” said San Martin.

Enel noted that drones were used for road surveys and for monitoring the progress of construction. The company said the “ARC GIS application was utilized to quickly transmit information between workers,” and a “360-degree camera was utilized to record construction activities.” It said iPads were used by workers in the field to access drawings and other construction-related documents, in part to reduce the amount of paper waste.

The past several years have seen a surge in the number of businesses transitioning their electricity supply to 100% renewable energy through corporate PPAs. At High Lonesome, the traditional virtual power purchase agreement is taken a step further with food and beverage company Danone North America. In 2019, Enel Green Power and Danone North America designed a customized PPA for the physical delivery of the renewable electricity associated with 20.6 MW of the wind farm, enabling the food and beverage company to sustainably power its production facilities in Texas.

The agreement between Enel and Danone North America will provide enough electricity to produce the equivalent of almost 800 million cups of yogurt, and more than 80 million gallons of milk each year, and support the food and beverage company’s commitment to securing 100% of its purchased electricity from renewable sources by 2030.

“Transitioning our Texas plants to a physical delivery PPA was especially important to us as we strive to change the game when it comes to fostering positive solutions for the planet. We strongly believe that the health of our planet and our people are inextricably linked so, as we work to further our mission of bringing health through food to as many people as possible, we’re delighted to be working with Enel Green Power to expand its High Lonesome wind farm and grow the renewable electricity infrastructure here in the U.S.,” said Marc De Schutter, head of Procurement for Danone North America.

Supporting the local community has been a major part of the project, bringing important resources to the McCamey area as part of its financial commitment to the region.

“The money that Enel gave to us will provide us several pieces of much-needed equipment. It will definitely help the wellness center to continue to be able to provide the services we do for the community,” said Lucy Johnson, Wellness Center Director for the McCamey Hospital District, in a testimonial on the Enel Green Power website.

Enel has plans to bring more renewable energy projects online in the next decade, adding to an impressive portfolio worldwide. The company in November 2020 announced it expects to triple its global capacity from renewable sources, reaching around 145 GW of installed capacity by 2030. Currently, Enel has about 50 GW of wind, solar, geothermal, and hydropower plants across the globe.

And North America will continue to be an important area for the Rome, Italy-headquartered company. “As part of its three-year strategic plan announced in November 2020, Enel Green Power is planning to bring an additional 3 GW of renewable capacity online in North America by 2023,” said San Martin. “Wind will make up a substantial portion of this growth.” ■