Despite policy hurdles, the wind sector has seen exponential growth and formidable cost reductions; it has the government’s endorsement for a low-carbon future; and it’s making up an ever-larger share of the nation’s power mix.

“We are now mainstream,” Kiernan declared, defining the overarching theme of the industry group’s annual event that took place May 18–21 in Orlando, Fla.

The lapse of the federal production tax credit (PTC) and investment tax credit at the end of 2014 wasn’t as harped on as it has been at past WINDPOWER events—but it was a talking point.

Pattern Energy CEO Michael Garland, AWEA’s new board chair, urged the event’s general session audience to call on Congress to extend the PTC. He also emphasized the importance of protecting state renewable portfolio standards. Garland said that wind was gaining bipartisan support, noting that Republican presidential hopeful Jeb Bush, former governor of Florida, had come out in favor of a multiyear extension of the PTC, and that “it’s the industry’s job to make sure other candidates do the same.”

During a later session to shed light on wind power’s medium- and long-term policy future, Jim Reilly, an AWEA official, noted that 85% of wind is in districts with Republican representatives. Another panelist, James Dozier, executive director of Citizens for Responsible Energy Solutions, who describes himself on his Twitter account as a Republican and a conservationist, said that Republicans are warming to the idea of climate change. “We have seen movement on both polling and in the chamber itself.” Progress has been slow, but there is some willingness to forge a path forward, he noted.

However, wind’s arrival into the mainstream was mostly illustrated by this point, echoed throughout the event by various AWEA members, including wind turbine manufacturers, as well as DOE officials: The cost of wind energy plunged 58% between 2009 and 2013. At least part of that drop can be attributed to the federal PTC, which has lowered the cost of capital for new wind farms.

During the opening general session, Susan Reilly, president of RES Americas, repeated Kiernen’s point that wind’s costs are being seen as economical. The evidence: “Yahoo, Microsoft, Google, IKEA—these are all big businesses with an increasing energy demand. They’re seeing good economics in wind.”

As another example, when asked during the event’s wind industry leaders panel if the sector could drive down the cost of wind power by another 25%, Vestas Americas’ President Chris Brown responded without hesitation: “Fifty-eight percent over five years. Enough said.”

Brown later underscored how important low costs were to the sector. “It’s about one thing. Least cost of energy,” he said. “We’re economic against a lot of forms of energy in most of the parts of the country. If we continue to drive that, we don’t become a political story, we become an economic story.”

But other leaders on that panel weren’t as zealous about more cost reductions. NextEra Energy Resources Senior Vice President of Development Michael O’Sullivan argued that further cost improvements will be gradual, whereas Jim Murphy, Invenergy’s CFO and COO noted that added cost reductions would need to be sourced beyond turbine costs, such as from project costs.

Another prominent point—and possibly the source of the event’s ebullience compared to last year when prospects looked more dismal after the PTC lapse—is that wind, along with other renewables, is a low-carbon energy source that will be required as the nation attempts to meet the president’s carbon targets.

The Department of Energy (DOE) had a large presence at the event, mostly to back its March-released Wind Vision report. That document finds that through continued innovation in technology and markets, the deployment of incremental U.S. wind power generation is both feasible and economically compelling. Importantly, it also sets out an ambitious goal of doubling U.S. wind power from its current 4.5% share of U.S. power generation to 10% by 2020, 20% by 2030, calling for wind power to become a dominant source of power by 2050.

Energy Secretary Ernest Moniz, who gave the opening keynote address, hailed wind generation’s growth over the last six years, saying that the agency is focused on expanding “its clean power potential” to every state in the country. “We are counting on you being a huge part of the [carbon] solution,” he told the audience.

However, he told reporters at a press conference later, that how the U.S. will address climate change in the long-term would require an economy-wide solution. It will require legislation, he said.

During his keynote address, Moniz unveiled a report, “Enabling Wind Power Nationwide,” which essentially posits that if advanced turbine concepts with hub heights of 110 meters (m) are used, the technical potential for wind deployment would surge to 4.3 million square kilometers (km2). That could increase the technical potential for wind deployment in areas such as in the Southeast, and generally in the U.S., by 54% compared to current technology with hub heights of 80 m, he said (Figure 1). 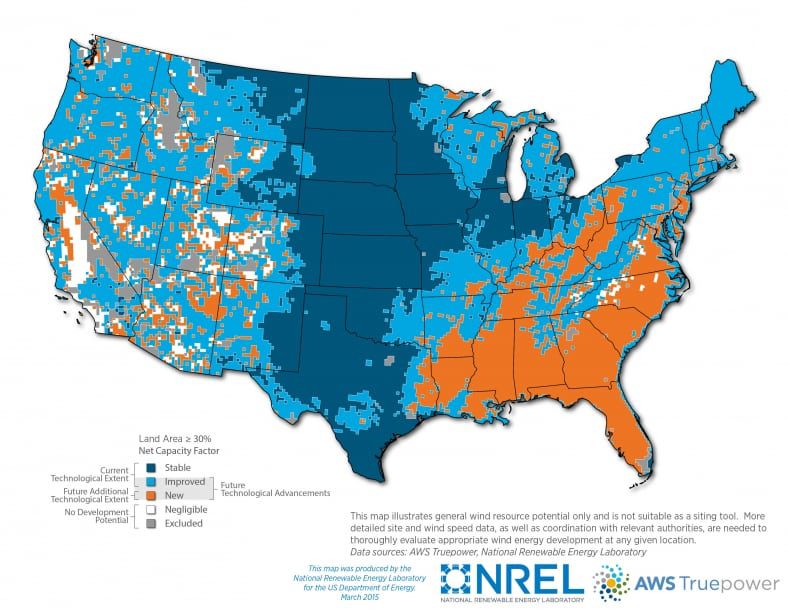 1.      Going national. This map from the National Renewable Energy Laboratory (NREL) shows how taller wind turbines could help unlock wind’s potential in all 50 states, especially in the Southeast. Source: NREL

Invenergy’s Murphy later noted that the DOE’s vision entailed adding about 10 GW a year. In 2014, the industry added 5 GW. “That’s something like $15 billion of investment. We need to broaden the capital base,” he said.

But, just how that will happen is unclear. Responding to a question posed by POWER about how the DOE’s ambitions will affect utility planning or operations, experts agreed that it would only be indirectly, if at all. NextEra’s O’Sullivan commented: “I’d be surprised if there’s a utility in the country that takes it into account.”

Jeffery Wehner, Duke Energy Renewables’ vice president of operations, speculated that, at most, the DOE’s Wind Vision sends out a message about the importance of renewable energy, and that could play into the demands of customers, which the utility would then try to meet. “As the utilities look at their rate base and what key customers are looking for, it’s a powerful part of that equation in terms of evaluating the overall asset base,” he said.

Pattern Energy’s Garland added that it was important to “keep in mind that the forming drivers are the Clean Power Plan, the [renewable portfolio standards], really getting cost down, and transmission. Those are going to drive the Wind Vision.”

So, what does the future hold for wind power in the U.S.? That was explored in a handful of sessions at the event.

One session, in particular, pitted four executives—whose diverse businesses involve transmission lines, low-wind speed turbine technology, repowering of existing wind sites, and offshore wind farms—against each other. They were asked: What will dominate the next phase of the U.S. wind power expansion?

Deepwater Wind CEO Jeff Grybowski argued that despite the apparent demise of the Cape Wind offshore wind project, the U.S. offshore wind sector is not dead. Europe, too, took a long time to get its first offshore project online, he said. He noted that Deepwater Wind last month launched construction of the Block Island project in Rhode Island. “We hope the Block Island project will unleash much larger offshore projects,” he added.

RES Americas’ Brian Healer, another panelist, argued that the future lies in generating power from low-wind-speed areas by increasing the rotor diameter and using advanced composite materials, increasing the generator size, and increasing the hub height—such as backed by the DOE in its recent report. Future development of low-wind-speed sites in the Southeast and West was closer than offshore wind, he said.

But for Clean Line Energy’s Jayshree Desai, the future of wind expansion rests on the construction of new long-haul transmission lines. A single new line could unlock 5 GW of new wind capacity—as much as was installed in 2014—she noted. Meanwhile, EDF Renewable Energy’s Rick Miller argued that repowering older wind farms was clearly in the future. He noted, however, that there is little incentive to repower compared to developing greenfield sites. More repowering will happen after wind farms reach their 25- to 30-year design lifetimes. But, chances are that many wind farms will extend lifetimes to 30 to 35 years, he said.

Many believe the future of wind will involve storing and managing “Big Data” that is widely being collected about turbine operations and weather. That was a point made by both experts in sessions and vendors on the exhibit floor.

Using simulation chairs at its booth, GE gave the world a glimpse of the “digital wind farm.” The concept entails creating a “digital twin” (Figure 2)—a cloud-based computer model of a wind farm at a specific location. The concept has two key parts, the company said: A modular 2-MW wind turbine that can be easily customized for specific locations, and software that can monitor and optimize the wind farm as it generates electricity. 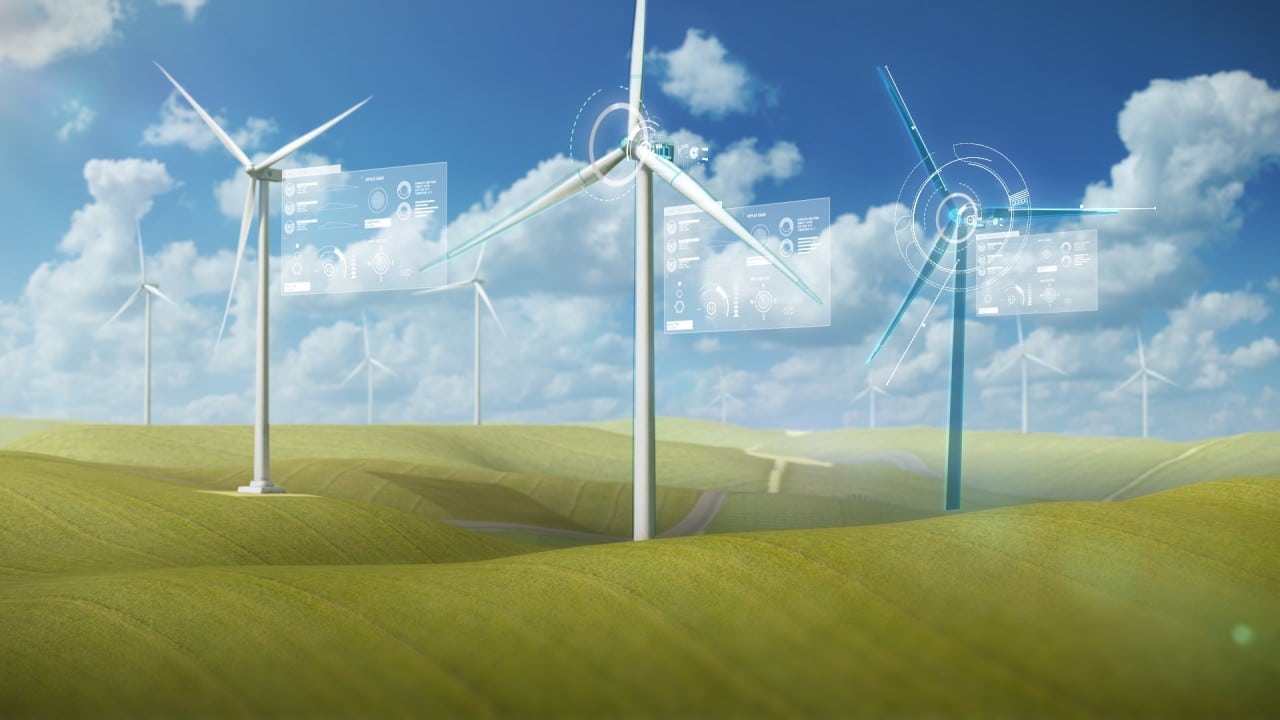 It allows engineers to pick from as many of 20 different turbine configurations—from pole height to rotor diameter and turbine output—to design “its most efficient real-world doppelganger,” GE said. As Ganesh Bell, chief digital officer at GE Power & Water explained: “Right now, wind turbines come in given sizes, like T-shirts. But the new modular designs allow us to build turbines that are tailor-made for each pad.” The digital twin will also keep track and analyze data pouring in from the wind farm and provide suggestions for making operations more efficient.

The technology could boost a wind farm’s energy production by as much as 20% and create $100 million in extra value over the lifetime of a 100-MW farm. “That value will come from building the right farm at the right place and then using data to produce predictable power and further optimize the farm’s performance,” said GE.

Meanwhile, among the event’s new product offerings was Siemens’ SWT-2.3-120, the company’s first turbine launched to specifically meet the demands of its customers in North America and South America. The 2.3-MW turbine model now features a 120-meter rotor, and it will be manufactured in the U.S. beginning in 2017.

According to Markus Tacke, CEO of Siemens’ Wind Power and Renewables Division, the turbine model’s drive train has been optimized to deliver maximum energy capture in medium- to low-wind conditions. That means, at wind speeds ranging from 6 meters per second (m/s) to 8.5 m/s, the new model can yield an increase of nearly 10% compared to Siemens’ SWT-2.3-108 model.