The global concentrating solar power (CSP) sector, criticized by some observers for high costs and uncertain technology, is poised for significant growth and a key role in the power mix—provided markets are structured to properly value their ability to store and dispatch renewable energy, three senior CSP executives said on Sept. 16.

Speaking at the Solar Power International conference in Anaheim, Calif., Kevin Smith, CEO of SolarReserve, complained that “the value of storage has not been fully realized in the U.S.” and as a result, “this is one of the biggest challenges” CSP has in the U.S. market (Figure 1). 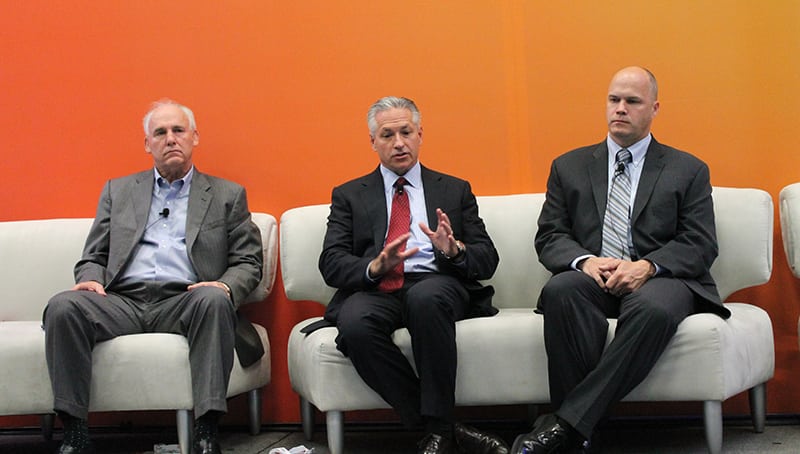 “We need to start comparing and valuing dispatchability of renewable energy solutions and ability to meet peak demand, not just dollars per watt,” Smith said.

As solar photovoltaic continues its dramatic growth, it will force their way into the baseload and be less able to meet peak demands because of a lack of dispatchability. And, with policies that favor renewables for new capacity—California, for example, committed to reaching 50% renewable generation by 2030 this month—renewable methods such as CSP that can store and dispatch power will be key.

“CSP with storage will maintain its value over the long term, even as demand profiles change,” Smith said. “CSP without storage is prone to the same intermittency issues as PV, and at a higher cost.”

Dave Ramm, Chairman and CEO of BrightSource Energy, agreed. “Without storage, this technology isn’t worth much.”

Fred Redell, managing director U.S. for Abengoa Solar, was not quite as pessimistic. “I wouldn’t go that far,” he said, noting that CSP economics are heavily dependent on the location. “But when you add storage, it transforms the product and makes it something much more valuable.”

“The question is, what resource are you trying to replace?” With the U.S. grid having an excess of baseload generation, CSP doesn’t necessarily need to be dispatchable around the clock, he said. But that’s not the case everywhere.

All three companies are focused overseas for future development, mentioning projects and potential projects in Chile, China, South Africa, and other countries in the developing world where immature grids have more use for energy storage.

Redell said the grids in places like Chile and South Africa have immediate needs for the sort of clean, dispatchable generation that CSP with storage can offer competitively.

Smith told POWER after the session that SolarReserve has developed a method to dramatically reduce CSP impacts on birds. He explained that research into the problem determined that most bird deaths occurred not during operation but during standby periods when the heliostats are randomly pointed up into the sky. This created multiple areas of concentrated sunlight that birds could not avoid because they cannot be seen (unlike during operation, when the glow on the power tower is a deterrent).

“The solution our engineers developed is to spread out the standby mirrors pointing in a distributed shape or pattern covering several football fields of space just above the tower so that no single point in the sky has a high enough level of concentration to be of risk to birds,” he said. “The birds can then fly through the standby pattern without harm. We have had virtually zero bird fatalities since we implemented this solution in January 2015.”

Smith also noted that CSP’s high costs are coming down, as the technology still has substantial soft costs that can be captured. He said that SolarReserve has been able to cut the cost of its heliostats—which represent about 40% of total project costs—by 50% between the nearly complete Crescent Dunes project in Nevada and its Redstone project under construction in South Africa. Ramm said Brightsource has made similar progress in reducing construction costs.

“There have been a lot of advances from a construction standpoint,” Redell said, explaining that Abengoa has found a variety of ways to make construction and manufacturing of CSP components more efficient and less expensive. Incremental advances in the performance of reflectors and other elements have helped make CSP more cost effective, he said.

The Department of Energy announced on Sept. 16 that Abengoa and SolarReserve were among the recipients of a total $32 million in grants intended to improve technology and cut costs for CSP.

Tim Connor, SolarReserve’s vice president of engineering and technology said in a statement that the company would use the grant to develop higher-temperature molten salt receiver technology. “Today, the molten salt is heated from 550F to 1050F,” he said. The SunShot CSP APOLLO award will be used for development of an innovative 1350F ceramic receiver that breaks through current temperature and performance barriers, while meaningfully increasing efficiency, energy storage capabilities and lowering capital cost.”

Smith said this is one advantage CSP has over PV. “The pace of implementation and cost reductions for PV has been dramatic, but the energy storage issue has not been resolved,” Smith said. “With increased CSP implementation, we anticipate similar efficiency and cost improvements for CSP, but a cost-effective storage solution with CSP has already been achieved.”