South Korea is gearing up to install the world’s longest distribution voltage superconductor cable system near Seoul by mid-2010. This April, the nation’s largest power cable manufacturer, LS Cable, ordered about 50 miles of 344 superconductors — American Superconductor Corp.’s (AMSC) second-generation high-temperature superconductor (HTS) wire. It plans to strand that wire into a 22.9-kV cable system as part of Korea Electric Power Corp.’s (KEPCO) commercial power delivery network. The proposed cable system will be nearly half a mile in length and capable of carrying 50 MW.

"As is the case in many countries around the world, Korea has been experiencing sharp increases in electricity demand and is relying more and more on renewable energy sources to meet that demand," said KEPCO CEO Kim Ssang-Su. "With their ability to carry a vast amount of power in a small pathway, we see great promise for superconductor cable technology and look forward to energizing this first system."

A power cable made with HTS wire inside can conduct up to 10 times the amount of power of the same-diameter cable made with copper wire (Figure 2). By replacing copper cables with high-capacity superconductor cables in cities using existing underground tunnels and ductwork, utilities can avoid digging up city streets while also relieving grid congestion and increasing the reliability and security of power networks. AMSC’s 344 superconductors, which piloted in 2007, feature a proprietary wide strip approach, which the company says reduces manufacturing costs. 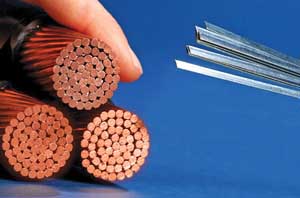 South Korea has been working on the development and commercialization of superconductor systems for some years now, spending more $100 million on its Development of Advanced Power Systems by Applied Superconductivity technologies (DAPAS) program. The new cable system builds on testing of 30-meter and 100-meter 22.9-kV superconductor cables. The two tests, which took place in 2006 and 2007, used AMSC’s first-generation HTS wire.

The world’s first transmission-voltage cable system was energized on Long Island in April 2008. This 138-kV system is now a permanent part of Long Island Power Authority’s (LIPA) primary transmission corridor. At full capacity, LIPA’s power cable system is capable of transmitting up to 574 MW of electricity. Another superconductor cable project is now under way with Consolidated Edison in Manhattan, N.Y., with partial funding from the U.S. Department of Homeland Security.