POWER reported on the art and science of water treatment and its effect on boiler performance in the cover story this month. "Dr. J.G. Rogers, an authority on steam generation, is quoted as stating that one-sixteenth of an inch of scale in a boiler will require the extra consumption of 15% more fuel; one-quarter of an inch, 60%; and one-half an inch, 150%. If on these percentages we could calculate the wastage in a single year by reason of scale, the aggregate would exceed belief; and what would it be if we could add the mere commercial results from loss of life and limb by boiler explosions attributable to the same cause?

"The wastage attending the generation of steam, and the danger menacing those who work at or near boilers, are very materially affected by the quality of water used. To quote from POWER: ‘By the use of impure water a very dangerous process may be going on inside the boiler,’ without giving any indications of danger.

"This fact has caused the prolific production of scale preventing compounds, the manufacture of tube scrapers and boiler cleaners, the construction of mud drums, and the building of feedwater heaters and purifiers without number; all seeking to keep boilers free from scale [Figure 1]. Impurities, where evaporation takes place, are left to corrode the tubes, weaken the boiler, decrease the effective energy of the heat and endanger those who are unconscious of impending peril. It will command itself to every engineer as good judgment to perfectly remove from the heater, before it goes into a boiler, all impurities that form scale, incrustation or deposit of any kind." 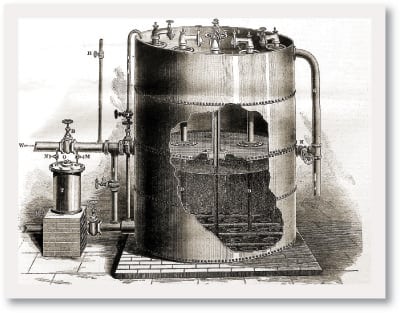 1. "The Hyatt system of water purification claims that the essential principles of nature are adapted so perfectly and ingeniously, as to invariably secure the purification of any kind of water, in any quantity, for any length of time."

"The International Harvester Company, of Chicago, Ill., has recently completed the installation of the first complete equipment of low-pressure steam turbine and regenerator on the system devised by Professor Rateau, of Paris [Figure 2]. Notwithstanding the unquestioned success of many European installations, American iron and steel manufacturers have been inexcusably tardy in appropriating this efficient means of reducing the cost of operation. 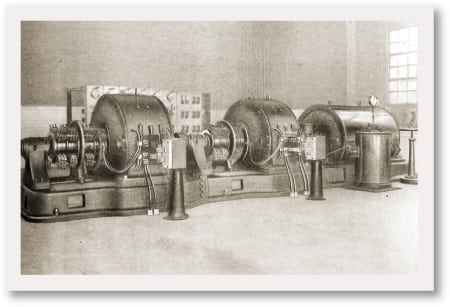 2. International Harvester installed the first Rateau steam turbine in the U.S. at its South Chicago Plant.

"A 500-kilowatt turbine generator set mounted on a substantial base plate, consisting of a Rateau low-pressure turbine and two similar direct-current generators each of 250 kilowatts capacity, at 250 volts, designed so that they may be operated in parallel. A 30-inch barometric condenser of the Alberger type complete with air cooler, exhaust entrainer, expansion join, and an air pump . . ." completed the design.

In addition to the all-too-common boiler explosion, POWER editors also reported on flywheel explosions. Though the latter were fewer in number, flying flywheel shrapnel could be catastrophic in its own way.

"On the night of March 24 [1907] the 20-foot belt-wheel of a pair of 25 x 48-inch Wetherill-Corliss engines at the Susquehanna Avenue Station of the Philadelphia Electric Company went to pieces, occasioning considerable property damage, but, fortunately, no personal injury [Figure 3]. The accident is said to have been due to the parting of a 48-inch three-ply belt, presumably disabling the governor. A fragment of the wheel opened a 10-inch steam main which was under 170 pounds pressure. A large piece went through the second floor and roof, hitting the brick stack at a point 36 feet above the building, and falling back [into the boiler room]. Several pieces were thrown across the street, one piece passing through four walls of the residence block opposite and landing in the back yard, a distance of 150-feet from the point of starting." 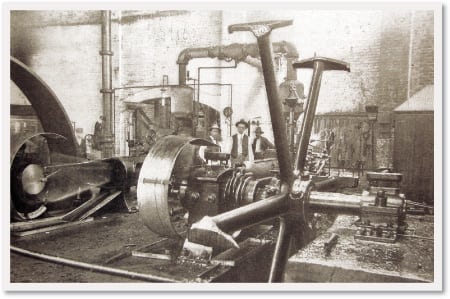 A special report explored advances in steam power plant design, specifically in size and operating conditions. "The most significant trends," the report explained, "are the increases in the size of turbine-generators and the increases in steam pressure and temperature. The cross-hatched areas [Figure 4] show the limits within which representative steam-station practice has fallen. An attempt has been made to indicate what might be called conservative practice, or trend, by means of a curve drawn through each cross-hatched area. 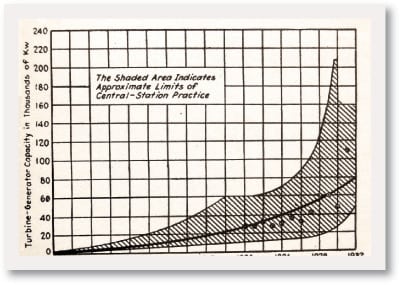 "Another important development has been the use of a single stage of reheating to raise the temperature of the steam, after partial expansion, to its initial temperature or slightly higher. The development dates from the initial operation early in 1925 of two 40,000-kw turbine generators in the Philo Station of the Ohio Power Company, with steam delivered to the turbine throttle at a pressure of 550 lb. per sq. in. gage and 725 deg. F. Since this initial development there has been installed, or is now in the course of construction, in 19 generating stations in the United States a total of 2,800,000 kw of turbine capacity for operation on the reheating cycle."

POWER editors also reported on several advanced concepts for power generation that still challenge us today. Take solar power: "The sun’s heat as a source of power has always interested certain scientific and engineering minds. The most outstanding attempts along this line are the recent well known experiments of Claude in Cuba where, at great expense, a large pipe line was laid to draw cold water from the depths of the sea, his to be used as a condensing medium for vapor (from the upper warmer sea layers) proposed through a turbine."

Another interesting plan for generating power from solar heat had recently been proposed by Monsieur H. Barjot: "Barjot dismisses as impracticable all schemes for utilizing the sun’s heat which use mirrors or lenses. Like Claude, he would make the use of differences in temperature between surface water and lower water, and would pass the vapor from the warmer water through a turbine to a condenser cooled by the colder water.

"Unlike Claude, he proposes to augment this temperature difference artificially by selecting a controllable area of water and covering it with a layer of oil. This he says, will enormously increase the temperature rise of the upper layer due to exposure to the sun. Monsieur Barjot computes a temperature difference of 54 deg. F. . . . [and] that with a sheet of water about 50 ft. square he could obtain 200 kw.hr. per day."

A 1952 study group at the Oak Ridge School of Reactor Technology proposed a compact, transportable package reactor to generate steam and electric power at military bases so remote that supplying them with bulky fossil fuels would be too difficult and costly. The result, written about in the 1957 June issue, was the transportable Army Package Power Reactor (Figure 5), capable of 10 MW of heat and 2 MW of electricity. The plant was the first reactor built under bid by private contractors. In fact, 18 separate bids were received, ranging from $2.25 million to $7 million. Don’t you wonder what the decommissioning costs were? 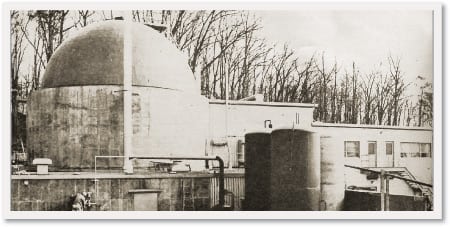 5. The Army Package Power Reactor went through its preliminary tests in March 1957 and produced 1,855 kW net. The core was designed to be easily transported in a C-47 aircraft. The plant was constructed at Ft. Belvoir in northern Virginia.

"The Army Package Power Reactor will be able to run 18 months on a single charge of uranium fuel that weighs only a few hundred pounds and is smaller than a barrel of oil. Alco Products, Inc. supplied reactor, pressurizer and steam generator of the APPR; Westinghouse Electric Corp supplied the canned-rotor pumps; General Electric Co. supplied the turbine and generator; Lummus Co. supplied the condenser and Minneapolis-Honeywell the controls.

"Normal operation will need total of 29 men. Operators will be high-school grads with 1-yr training, led by engineers."

Also in 1957, an ad placed by General Electric (Figure 6) congratulated the Ohio Power Co.’s Philo Plant Unit 6 on the start-up of the world’s first supercritical double-reheat power plant, 32 years after the first reheat turbines were installed at Philo Station. 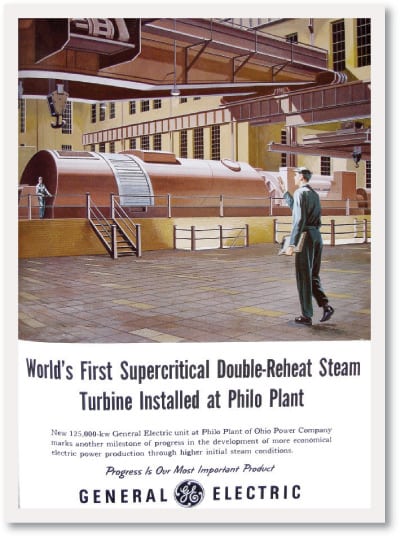 6. Philo Unit 6 was retired in 1979 and was designated an Historic Mechanical Engineering Landmark by ASME International in 2003.