A new, mile-long submarine transmission cable in Pearl Harbor (Figure 3, p. 10) will facilitate the U.S. Navy’s plan to renovate and expand historic Ford Island. Honolulu-based Hawaiian Electric Co. Inc. (HECO) recently laid two new 46-kV lines beneath the bridge connecting the island to Oahu. The trickiest part of the installation was avoiding the wreck of the USS Arizona, which sank with more than 1,100 of her crew aboard on December 7, 1941, after being hit by Japanese horizontal bombers. 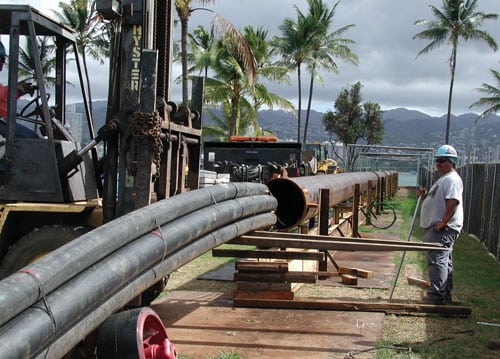 3. Heave ho. As part of the U.S. Navy’s electrical upgrade of Ford Island in Pearl Harbor, power lines are fed into a pipe that will eventually extend a mile long. Courtesy: Hawaiian Electric Co.

HECO installed the connection under a $22 million contract with the Navy. Contractors horizontally drilled through silt, sand, clay, and coral to install the steel casings, each of which holds six bundles of cable. Each mile-long, 24-inch-diameter steel casing holds six high-density polyethylene ducts.

The Navy’s plans for Ford Island include adding housing, shopping complexes, a Pacific War Fighting Center, and a National Oceanic and Atmospheric Administration facility—all of which will increase demand to 34 MVA, far above the 12-MVA capacity of the existing submarine cables servicing the island. The new HECO circuits will provide 40 MVA of capacity.