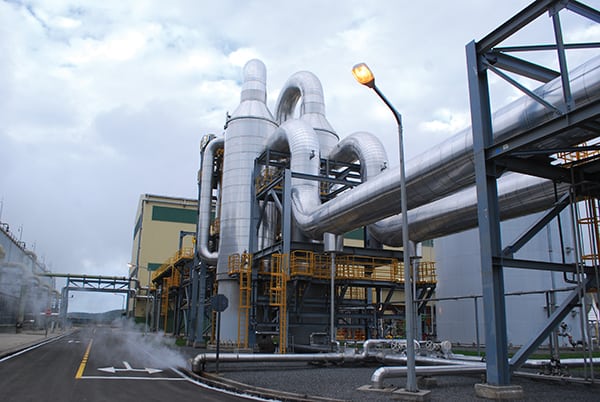 Kenya plans to produce the bulk of its electricity from geothermal power. The recent 280-MW expansion at its Olkaria fields has shown how beneficial the indigenous, renewable energy source can be.

The Great Rift Valley is a massive continental fault system that runs 6,000 kilometers (km) from Mozambique to Jordan. In Kenya, the East African nation that is neatly halved by the equator, the Rift Valley is a distinguishing topographical feature, a literal vertical divide that is the source of stunning panoramas—flamingo-flecked lakes, shrub-stippled escarpments, craggy mountains, and dramatic, rust-colored gorges—all formed over eons by the shifting faults and erosion.

But, under the surface, the ground continues to roil, particularly around Olkaria—a region characterized by hot springs, fumaroles, searing rocks, and sulfur-oozing fissures. The hotspot lies in the Naivasha sub-basin of the Rift Valley, in the vicinity of a national park aptly named “Hell’s Gate.”

To determine its power-producing potential, in the late 1950s—about five years before Kenya gained her independence from Britain—the government successfully drilled two exploratory wells in the area to a depth of about 950 meters (m). Nearly 10 years later, it teamed with the United Nations to assess its geothermal resources, focusing on an 80-square-km tract of land in Olkaria. In 1981, the first 45-MW geothermal plant was established (at Olkaria I).

Fast forward two decades, with some $1 billion committed by development funds, about 579 MW of a potential of 10 GW of geothermal power has been developed. Most is owned by the Kenya Electricity Generating Co. (KenGen)—a company majority-owned by the Kenyan government that produces 80% of Kenya’s power—with the remainder owned by Ormat International subsidiary OrPower 4.

Meanwhile, the Olkaria geothermal field has since been divided into seven portions for ease of development and management. Olkaria I now hosts a KenGen power plant with three 15-MW turbogenerators that were commissioned between 1981 and 1985. That field was expanded this February by 140 MW with the addition of two new 70-MW units (Figure 1). KenGen says the increase of steam in the field was due to drilling wells of 3,000 m, deeper than earlier wells that were drilled to between 900 m and 2,200 m.

Plans for the expansion are directly rooted in the government’s ambitions to meet soaring demand for power. KenGen contracted Japan’s Toyota Tsusho Corp. and South Korean firm Hyundai Engineering & Construction Co. to manage the 280-MW Olkaria phase, including engineering, procurement, and construction, in November 2011. The companies teamed up with Toshiba Corp., which delivered the steam turbine generators. Toshiba reported that it succeeded in accelerating delivery of the turbines by two to three months, as was needed. 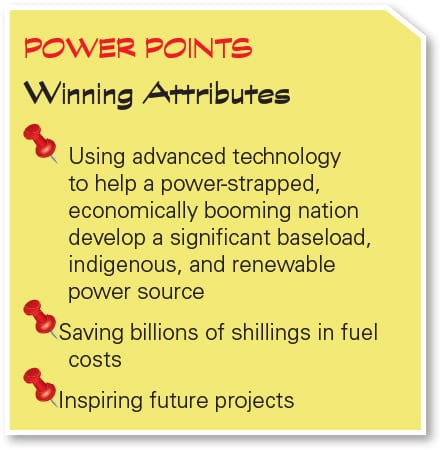 The expansion project consisted of four identical 70-MW units, each with a design steam pressure and temperature of 6 bar and 158.7C. Developers opted for a single-flash cycle system—the most popular type of geothermal power plant—because it uses well-proven technology and a wide range of applicable design conditions. The technology essentially entails sending a mixture of steam and hot water produced at production wells via two-phase pipelines to separator stations, where steam is separated from hot water using a steam-water separator. The separated steam is then sent via pipelines to the powerhouse, and the hot water is sent back to reinjection wells. Meanwhile, the steam generates power by rotating the steam turbine, after which it enters the condenser, where it is cooled by cooling water brought in from a cooling tower.

In Olkaria, where production wells are drilled during construction of the surface facilities in order to shorten the project period, a single-flash cycle is preferable, explained West Japan Engineering Consultants in a preparatory survey.

Before the project was carried out, Kenya had already installed about 241 MW of geothermal power. However, the expansion provided KenGen experience and technical training in more advanced geothermal technology, including for steam exploration, well-drilling, and power plant construction and operation.

Perhaps as noteworthy is that the project has helped the country save billions of shillings each month by displacing an equivalent amount of mostly diesel and heavy fuel oil–fired power.

Despite rolling out an ambitious long-term energy plan, dubbed “VISION 2030” in 2008, Kenya continues to depend on hydropower for its electricity needs and typically sees widespread outages—even though only 25% of its population of 44.4 million people has access to electricity. Recently stricken by a two-year-long drought, that dependency has been debilitating to its soaring economic growth. Since adding the much-needed 280 MW of geothermal capacity to the national grid, total geothermal capacity has grown to 521 MW, surpassing hydro as the country’s main source of power and mitigating power shortages at a time when rains failed, KenGen said earlier this year.

The expansion of the indigenous renewable power source has also resulted in a 65% drop in the generating company’s fuel costs, it reported. That alone has made a substantial impact on electricity prices: According to KenGen CEO Albert Mugo, as a result of the government’s investment in geothermal energy, since August 2014, the cost of power to industrial and domestic consumers has fallen by more than 30%.

The project’s financiers, which include a number of international development entities—such as the World Bank, the Japan International Cooperation Agency, the European Investment Bank, French Development Agency, and Germany’s KFW—laud this achievement because it shows how getting affordable electricity can transform lives. “Kids can learn at school and do homework at night. Businesses can flourish and create new jobs. That’s why we are investing in the energy sector, which is a key infrastructure investment in the fight against poverty,” said Diarietou Gaye, the World Bank’s country director for Kenya this February.

Plans under way include building a sixth 70-MW unit at Olkaria I, the two-unit, 140-MW Olkaria V project, and the two-unit, 140-MW Olkaria VI project. Meanwhile, the Geothermal Development Co., a state-owned firm established to drill and develop new resources, is surveying at least 16 other fields, including at Menengai and Eburru, to help the country ultimately add 8 GW of new geothermal power. ■