Declining oil prices, supply issues, and dwindling financing may have battered solar energy in recent months, but the industry seems to have sparred well in the research arena. An assortment of institutions separately announced breakthroughs in their quests to boost the efficiency of solar cells. The technological advancements ranged in approach, from the development of an antireflective coating to the formulation of more efficient solar cell materials, but all point to promising possibilities for the industry.

In November, researchers at New York’s Rensselaer Polytechnic Institute said they had discovered and demonstrated a new antireflective coating that boosts the amount of sunlight captured by solar panels by allowing the panel to absorb the entire solar spectrum from nearly any angle.

The project, funded by the Department of Energy and the U.S. Air Force, involved stacking seven layers of antireflective coating — each with a height of 50 nanometers to 100 nanometers — in such a way that each layer enhances the antireflective properties of the layer below it (Figure 5). The seven layers were made up of silicon dioxide and titanium dioxide nanorods positioned at an oblique angle, and the nanorods were attached to a silicon substrate via chemical vapor disposition. The additional layers also help to "bend" the flow of sunlight to an angle that augments the coating’s antireflective properties so that each layer not only transmits sunlight, it also helps capture any light that may have otherwise been reflected from the layers below it. 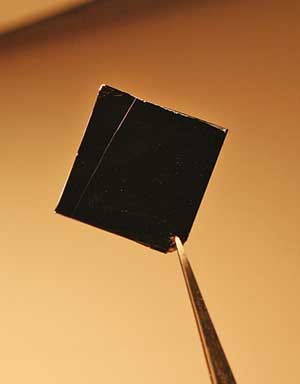 5. Antireflective coating. A new antireflective coating developed by researchers at Rensselaer Polytechnic Institute could help to overcome two major hurdles blocking the progress and wider use of solar power. The nanoengineered coating, pictured here, boosts the amount of sunlight captured by solar panels and allows those panels to absorb the entire spectrum of sunlight from any angle, regardless of the sun’s position in the sky. Courtesy: Rensselaer/Shawn Lin

According to results published in the journal Optics Letters, the coating absorbed 96.21% of sunlight shone upon it — compared to the 67.4% of sunlight absorbed by an untreated silicon solar cell. The huge gain in sunlight absorption was consistent across the entire spectrum, from ultraviolet to visible light and infrared.

The new coating also tackles the tricky challenge of angles: If not optimally positioned, conventional solar panels absorb considerably less light, which is why some solar arrays are mechanized to move slowly throughout the day. But, the antireflective coating demonstrated absorption of 96.21% of sunlight evenly and equally from all angles, no matter the position of the sun in the sky, the researchers said. The coating is designed to be affixed to nearly any photovoltaic materials for use in solar cells, including III-V multi-junction and cadmium telluride.

A team of physicists and engineers at the Massachusetts Institute of Technology (MIT) used a similar approach, but they applied an antireflective coating to the fronts and backs of ultrathin silicon films to boost the cells’ output by as much as 50%. The combination of multilayered reflective coatings and a tightly spaced array of lines — called a diffraction grating — caused the light to bounce around longer inside the thin silicon layer, giving it time to deposit its energy and produce an electric current.

As well as boosting efficiency, the thin films used in MIT’s technology present significant potential savings because they use only about 1% as much silicon as do high-quality silicon crystal substrates that make up conventional solar cells. An evaluation of the technology’s business potential also found "significant benefits in both manufacturing and electrical power delivery, for applications ranging from remote off-grid to dedicated clean power."

So how soon could we see commercial deployment of the technology? That may well depend on the economic health of the solar industry. "If the solar business stays strong, implementation within the next three years is possible," said Lionel Kimerling, a professor in MIT’s materials science and engineering department.

Researchers from the FOM Institute for Atomic and Molecular Physics in the Netherlands looking to convert a majority of all incoming light into usable energy said in December they had successfully employed the nanoparticle approach to make gains in efficiency. Their technology uses nanoscopic metal particles to create tiny electrical disturbances called "surface plasmon." When light strikes the particle, it makes the particle vibrate, causing the incoming light to scatter and keeping more of the light within the solar cell. The researchers also found that varying the size and material of the particles allowed for improved light capture, including of colors that otherwise perform poorly.

The results, published in the journal Optics Express, showed that light capture for long-wavelength (reddish) light could be improved by a factor of more than 10. A team at the University of New South Wales in Australia had previously shown that overall light-gathering efficiency for solar cells using metallic nanoparticles could be improved by 30%. "I think we are about three years from seeing plasmons in photovoltaic generation," said researcher Kylie Catchpole, who published the paper with colleague Albert Polman. "An important point about plasmonic solar cells is that they are applicable to any kind of solar cell." This includes the standard silicon or newer thin-film types.

In recent months, just as falling oil prices and a worldwide economic slowdown have dulled solar’s gleam and made it less attractive as a power source than coal and gas, hundreds of solar technology factories have cropped up around the world. Meanwhile, the cost of silicon has dropped by half. Industry analysts are forecasting that by 2010, as a result of the recent solar industry buildup, the supply of silicon for solar panels will far exceed demand — driving prices down even more.

Hurtling over the silicon cost factor had been a priority for researchers looking to develop other materials that could be used in solar cells — but so was efficiency. Several advancements have been made as a result, though it now remains to be seen how commercially viable they will be. Researchers at Ohio State University, for example, recently announced they had devised a potential solar cell material that can capture the entire visible spectrum of sunlight. The material, an electrically conductive plastic combined with metals, such as molybdenum and titanium, has promising properties — including the ability to generate electrons that remain in an excited energy state for a relatively long time. Meanwhile, a team at MIT is looking closely at cuprous oxide, the reddish mineral used as a pigment and fungicide, for its promising optical properties. The team is using defect engineering methods to improve the mineral’s electrical properties. It is also working with nine other compounds that it identified as potential candidates for making solar cells.

Scientists are also looking to refine silicon production processes. Another MIT team, for example, is trying to develop a refining process to chemically or mechanically remove impurities in silicon-rich quartz ore before the melting process — and in doing so, eliminate steps in the costly purifying process. A similar study, also at MIT, seeks to improve the efficiency of solar cells made using multicrystalline silicon, rather than expensive single-crystal wafers, such as those used for computer chips. Multicrystalline materials contain defects within the grains called dislocations, which tend to soak up a lot of the energy produced. The MIT researchers have found that reheating the material to a controlled temperature after it has initially cooled down in the manufacturing process, a technique known as annealing, reduces the energy-sapping dislocations more than a hundredfold — bringing it to nearly the same crystal quality as the pure, single-crystal form. MIT said that part of this research is already well advanced and that the team is working with manufacturers to bring it to market. Pilot runs are expected within a year, and full-scale production soon thereafter.