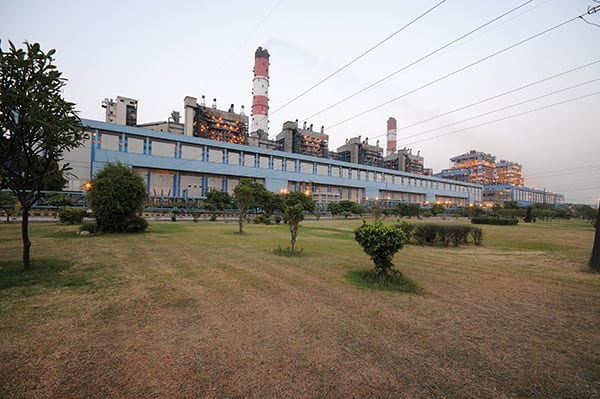 India’s state-owned generator NTPC operates a large fleet of power plants across the nation, and one of its top performers is found outside the capital of New Delhi. Staff at NTPC Dadri have taken a proactive, innovative approach to maintaining their plant, making it one of the most efficient in India despite its 1990s vintage.

Coal may be facing myriad challenges elsewhere in the world, but it’s still king in India. The South Asian nation is the world’s third-largest coal consumer after China and the U.S., and it currently gets around 65% of its electricity from coal, making it one of the most coal-dependent countries in the world. Yet, despite enormous growth in generating capacity, India’s power sector still struggles to stay ahead of growing demand. Roughly 240 million Indians live without access to electricity, according to the International Energy Agency, which means the potential for continued future demand growth is very large.

India has also sometimes struggled with supplying fuel for its fleet of large coal-fired plants and with controlling their environmental impacts. Widely reported coal shortages in 2014 and 2015 threatened reliability for months, leading to strenuous efforts to boost coal production. Shortages have eased in 2016, but long-term concerns remain.

Meanwhile, the government of Prime Minister Narendra Modi has committed the nation to ambitious carbon-reduction targets of 33% to 35% below 2005 levels by 2030 as part of the COP21 accords, as well as to efforts to reduce nationwide emissions of sulfur dioxide, NOx, and mercury. Those moves have cast doubt on plans for a fleet of large “ultra mega” projects of around 4 GW in capacity. Many have been proposed, but only a handful have begun development, and only two—Sasan (see “Sasan’s Shadow: An Ultra Mega Power Project’s Dark Side” in this issue) and Mundra (a 2014 POWER Top Plant)—have reached the operational stage.

In this environment, improving efficiency and reliability at existing coal plants is paramount. In that effort, few have done as well as NTPC (formerly National Thermal Power Corp.) Ltd.’s National Capital Power Station Dadri in Uttar Pradesh about 50 kilometers (km) outside the capital of New Delhi. 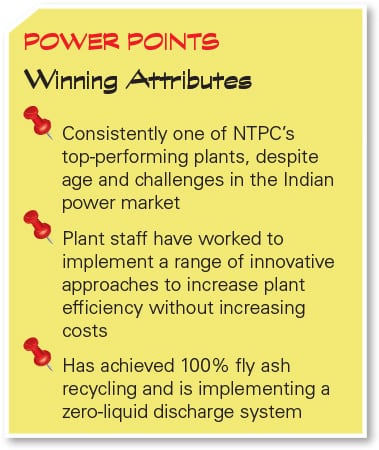 At a total installed capacity of 2,654 MW, NTPC Dadri is one of the largest power plants in India. It currently consists of six coal-fired units, 4 x 210 MW and 2 x 490 MW; a six-unit 829-MW gas-fired combined cycle plant; and a 5-MW solar farm. Adjacent to the plant is a 5,300-MW switchyard, the largest in the nation, which connects to a 400-kV transmission line.

The four 210-MW units in Stage 1 were commissioned between 1991 and 1994. The four Combustion Engineering boilers, supplied and built by Bharat Heavy Electricals (BHEL), have dual-fuel capability and can burn fuel oil in addition to coal. (The plant maintains 10 days of fuel oil storage on site.) Dadri was the first plant in India to employ horizontal feedwater heaters. The plant’s control systems were upgraded to digital by BHEL in 2015. The combined cycle plant was built concurrently with Stage 1, with the units coming online between 1992 and 1993.

The two 490-MW Stage 2 coal units were commissioned in 2010. These units include a number of technological improvements and innovations, including digital controls and an experimental system for reducing scaling in its condenser tubes. Construction was completed in record time for an NTPC project and allowed the units to come online in time for the 2010 Commonwealth Games. The Stage 2 project was honored by the International Project Management Association for this achievement.

Coal for the plant is sourced from state-run Central Coalfields mines in North Karanpura in Jharkhand state, about 1,500 km away. Water for makeup and cooling is sourced from the nearby Upper Ganges Canal.

Both stages operate electrostatic precipitators to reduce particulate emissions, and a flue-gas desulfurization system is planned to reduce SOx emissions. The plant’s wastewater is treated and recycled in an adjacent treatment plant. Food waste from the adjacent township and plant canteen is treated by bio-methanation, and the produced biogas is used for cooking at the plant guest house. With water shortages a perennial concern in India, transition to full zero-liquid discharge posture is under way and expected to be complete by the end of 2016.

Dadri’s performance has been among the best in NTPC’s fleet since its commissioning. Under NTPC’s Performance Evaluation Matrix system for ranking station performance, Dadri has been among the top three plants 10 times over the last 13 years (the company’s fleet, including joint ventures, totals 26 coal and eight gas plants). It has also achieved top marks for availability and boiler tube leakage, having been ranked in the top three of NTPC’s fleet for minimum tube leakage over the last five years. For this record, Dadri has been honored with a range of awards, both from NTPC and industry groups, including the Heat Rate trophy for NTPC’s most efficient plant during 2014–2015.

Plant staff have continually worked to develop innovative methods for improving plant efficiency and reducing auxiliary power drain. These have included reduced operation of the cooling water and air conditioning systems and coal mills during the winter and times of low demand.

One unusual approach is centered around a solar thermal cooking system installed at the plant canteen in 2015 (Figure 1). The system collects heat from the sun for cooking and can store it for use after dark. A similar system is planned to be integrated into the plant’s feedwater heating system. A portion of the feedwater will be routed through the solar thermal system and then back to the plant. Estimates are that this may save about 4,000 tons of coal per year, reducing steam extraction for the feedwater heaters.

Dadri’s ash-handling approach is a trendsetter for South Asia. For the past 10 years, it has achieved 100% recycling of fly ash, mostly at an on-site brick manufacturing plant. In addition to bricks, more than 20 other products are produced at the plant. Fly ash is also supplied to cement manufacturers. Dadri was the first plant in Asia to use dry ash handling for bottom ash, and the landfills are carefully landscaped to prevent fugitive dust problems.

NTPC Dadri is not just a power plant but also the center of a community. An adjacent township for the 700 plant staff and their families encompasses not just homes but also several parks and community centers with swimming pools, sports fields, and fitness equipment, as well as schools, shopping centers, and medical offices. There is a golf course, built over part of the ash landfill, and an engineered wetland and bird sanctuary created using treated wastewater from the plant, which has become a wintering ground for migratory birds such as Siberian cranes. Because the surrounding area is mostly farmland, the dense scrub jungle over and around the landfill has attracted a variety of wildlife, including the occasional leopard.

Outside the plant development, NTPC Dadri has supported social welfare causes in the nearby villages, such as road development and medical care. Dadri staff have supported and contributed to education in computers and entrepreneurship for village young people. Students from the villages are also eligible to attend schools inside the township.

For the future, Dadri is planning to expand its solar generation with one of the first floating solar photovoltaic (PV) systems in India, to be installed over one of the on-site reservoirs. The system will be used to study performance characteristics and benefits of floating PV systems. ■