While the global spotlight is fixed on India’s massive coal-fired power capacity expansion, the country with meager uranium reserves has been pressing on with a unique long-term program that pushes for research and development of nuclear reactors using all three main fissionable materials: uranium-235, plutonium, and uranium-233. The three-pronged program, developed largely during the country’s almost 30-year-long isolation from international nuclear trade, also factors in India’s abundant reserves of thorium, which constitute 25% of the world’s total reserves.

The program has made some major advancements, as Anil Kakodkar, chair of India’s Atomic Energy Commission (IAC) told members at the International Atomic Energy Agency’s (IAEA’s) General Conference in Vienna this September. The nation has largely completed design of a 300-MW Advanced Heavy Water Reactor (AHWR), a unit that will be fueled by a mix of uranium-233 and plutonium — which will be converted from thorium by previously deployed and domestically designed fast breeder reactors. Construction on the first AHWR is scheduled to start in 2012 — though no site has yet been announced. Civil construction of the nation’s first 500-MW prototype fast breeder reactor at Kalpakkam, Tamil Nadu, meanwhile, is under way, scheduled for completion in 2011.

And now the nation has also designed a special version of the AHWR (Figure 5), a 300-MW reactor that uses low-enriched uranium (LEU), replacing plutonium with uranium enriched to 19.75% U-235, the AEC head said. Kakodkar indicated that the vertical, pressure tube type, boiling light water – cooled, and heavy water – moderated AHWR-LEU was intended for export. "This version of the design also can meet the requirement of medium sized reactors, in countries with small grids while meeting the requirements of next generation systems," he said. "While we strongly advocate recycle option, AHWR-LEU would also compete very favourably even in once through mode of fuel cycle." 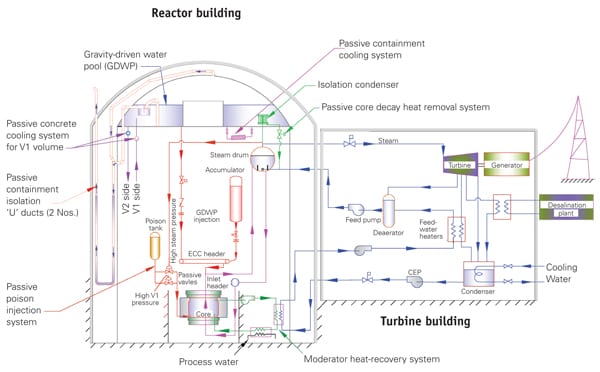 5.    Packing a punch. India, a country that has devoted its nuclear research and development program to making use of its abundant thorium reserves, recently announced it had designed a special version of the Advanced Heavy Water Reactor (AHWR), which uses low-enriched uranium (LEU). According to a brochure distributed at a recent nuclear conference in Vienna, in comparison with modern light water reactors, the 300-MW AHWR-LEU would require about 13% less mined natural uranium for the same quantity of energy produced. The country has indicated that this reactor would be exported to nations with small grids. Courtesy: Bhabha Atomic Research Centre

Kakodkar did not say when the new AHWR variant would be commercially ready. Industry experts said, however, that the announcement was significant because it reaffirmed that India was committed to development of its thorium fuel cycle and that it was doing so with urgency, particularly because of climate change concerns. The matter should also be given weight in light of Indian Prime Minister Manmohan Singh’s assertion on Sept. 29 that the nation could generate 470 GW of power by 2050 if it managed the three-stage program well. "This will sharply reduce our dependence on fossil fuels and will be a major contribution to global efforts to combat climate change," he reportedly said at an international conference on the peaceful uses of nuclear energy.