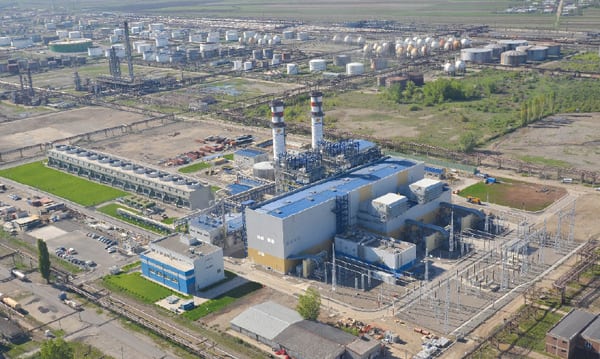 Romania’s power market was opened to independent power producers when the country joined the European Union in 2007. CCPP Brazi is the first greenfield, privately owned power project to be constructed in Romania. The flexible combined cycle plant has the capability to provide steam to an adjacent refinery and produces about 9% to 10% of Romania’s electricity requirements. It’s also the most efficient thermal plant in Romania.

Romania began the process of restructuring its vertically integrated, state-owned electricity industry to meet European Union (EU) directives several years before it joined the EU in 2007. The electricity resale market was officially opened on July 1, 2007, allowing independent producers and self-producers access to sell electricity, although a fully functioning and transparent market remains a work in progress.

The industry was divided into five state-owned organizations in 2007: Nuclearelectrica (nuclear plants), Hidroelectrica (hydroelectric plants), Thermoelectrica (fossil-fired plants) plus Transelectrica (transmission), and Electrica (distribution). Electrica has since been further split into eight regional companies, four of which have been privatized and sold to foreign corporations. Although Thermoelectrica was also unbundled, state-owned power generation companies still control 65% of the electricity market. Today, Romania is a net exporter of electricity to Southeastern Europe as well as a net exporter of refinery products to the region.

About 50% of the thermal plants and about 30% of all generation plants in Romania operate as combined heat and power plants, although many of those plants are obsolete and now operate with low capacity factors. Nuclear power from Romania’s two plants currently supply ~20% of the country’s electricity demand (the second reactor entered service in 2007), ~40% from coal, ~12% from other hydrocarbon fuels, and ~26% from hydroelectric, with the remaining ~2% as wind (2011 data).

Romania also has the third-largest natural gas reserves in the EU. The two largest players in the Romanian gas market are state-owned Romgaz and OMV Petrom S.A. (51% owned by OMV Group of Austria, with a minority 20% remaining state-owned). Based in Bucharest, OMV Petrom S.A. is the largest Romanian and a leading Central European oil and gas group, with activities in exploration and production, refining, petrochemicals, and natural gas.

With liberalization of the power markets in 2007, OMV formed OMV Power International GmbH (OMV Power) to address emerging power market opportunities in Europe. Since its formation, OMV Power has constructed more than 1,700 MW of high-efficiency gas-fired combined cycle plants in Austria, Turkey, and Romania and has several other projects under development.

OMV Power’s latest plant to enter commercial service is its 860-MW Combined Cycle Power Plant (CCPP) Brazi, located in the municipality of Brazi, about 40 kilometers (km) north of the city of Bucharest and adjacent to the Petrobrazi Refinery. CCPP Brazi represents the largest private power generation investment in Romania to date, providing about 800 MW of electricity; it also is capable of supplying an additional 100 MW thermal of process steam to the refinery. The plant’s electricity production represents about 9% to 10% of Romania’s total electricity demand. The refinery consumes about 20% of the plant’s electricity output, and the remainder goes to the grid. Equity natural gas (gas produced by an OMV upstream company) is supplied via a 30-km pipeline from the Transgaz network.

Construction of the €530 million CCPP Brazi began in June 2009, after a lump sum turnkey contract was signed with a consortium of General Electric (GE) and Metal Constructions of Greece S.A. (Metka S.A.), a leading Greek international engineering and construction company. In addition to equipment supply, GE provided project management and commissioning services and acted as leader of the consortium. Metka S.A. supplied balance-of-plant equipment, engineering, and construction services. The power train (both combustion turbines and generators plus the steam turbine) is covered by a GE long-term service agreement.

CCPP Brazi was GE’s first large turnkey project in the region. ESB International was retained as owner’s engineer for the project. Construction and testing of the project was completed in November 2011; however, operation of the plant was interrupted due to gas supply issues. The plant began delivering electricity on a commercial basis on Aug. 1, 2012.

CCPP Brazi is based on GE’s S209FB standard combined cycle plant design. The 2 x 1 configuration plant uses two 9FB combustion turbines (CT) and a single steam turbine. Measured plant performance was ~860 MW gross, which represents ~57% thermal efficiency, based on plant performance test data taken at site conditions. The thermal efficiency of CCPP Brazi is nearly 50% greater than the average efficiency of all the fossil-fired plants in Romania. The plant must also operate in southern Europe, where the ambient temperatures range from –32C to 42C.

One key design characteristic of the plant is its operational flexibility. The plant can operate over a broad load range, from ~200 MW to 860 MW with fast startup and shutdown times. Romania’s renewables strategy requires CCPP Brazi’s fast response to balance capacity, particularly since Romania plans to add from ~1,300 MW to ~3,000 MW of new renewables over the next four years. Since entering commercial operation, CCPP Brazi has had more than 1,600 calls from the grid operator for grid support and balancing power.

GE’s 9FB is specifically designed for fast response to changing grid demand signals. For example, when operating at low loads, the CT’s variable inlet guide vanes maintain surge margin while improving part-load efficiency. The inlet guide vanes can also be closed to increase exhaust gas temperature while operating at low loads during periods of low electricity demand so the bottoming cycle can remain in operation. Each CT is connected to a GE 330H hydrogen-cooled generator.

On the steam side, Doosan provided the heat recovery steam generators that deliver steam to the single GE D11-42 steam turbine (Figure 1).

Natural gas is compressed for the CTs by the three 50%-sized MAN turbo gas compressors that increase gas pressure from 12 barg to 38 barg for the plant and the nearby refinery.

Marc Smith, responsible for power engineering and projects for OMV Power International GmbH, noted that “during the construction both the owner and the GE/Metka consortium worked together to manage challenges such as technical issues, safety on site, completing the CCPP Brazi with more than 5 million man-hours while all the workers were able to go home safely to their families.”

Starting up a new combined cycle plant is much like starting up any new power plant—it takes planning and must be executed with an expert staff. Adding to the challenge, OMV Power decided to develop an internal plant operations and maintenance (O&M) capability at about the same time as CCPP Brazi was being designed.

Next, OMV Power hired the CCPP Brazi plant manager, O&M managers, and other experts who would be responsible for the plant O&M. The O&M management team was in place and provided valuable input during design and construction and was ready to assume custody and control of the plant at the appointed time.

An information technology architecture was developed after the people and processes were in place. SAP was selected as the OMV Group’s standard computerized management maintenance system. SCADA, developed by Aspen Technology Inc., was selected to automate data collection and calculation of plant KPIs across all the company’s plants.

Professional O&M management is vital for success in today’s competitive electricity markets. The systems and procedures developed as part of the CCPP Brazi project have since been exported to other OMV Power facilities so that consistent and measurable O&M practices and cost controls are in place. OMV Power, by investing in its O&M infrastructure early and leveraging proven power generation technology, is well positioned to become the foremost independent electricity producer in southeastern Europe. ■