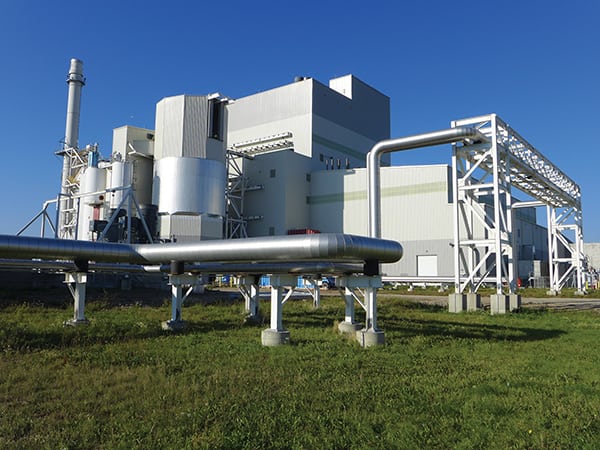 Combining electric power production with use of steam for heating, cooling, and industrial processes is an old idea that had a brief boom in the U.S., kicking off the rise of non-utility generation. Since then, combined heat and power, or cogeneration, has become a niche market player. What happened?

In the late 1990s, the University of Illinois Hospital in Chicago faced energy problems at the 536-bed facility. It had intermittent electric power because its elderly power plant suffered frequent breakdowns, and it needed to replace old boilers that were part of a steam system owned and operated by Commonwealth Edison, the local utility. So the university, working with Caterpillar’s Solar Turbines subsidiary, installed a 24-MW cogeneration system consisting of three natural gas–fired turbines and a heat recovery system.

The work was done in 2001. The hospital’s combined heat and power (CHP) system supplies 100% of campus power in the winter and 72% in the summer. The system also supplies steam for space heating, cooling, and hot water for 32 campus buildings, as well as heat for sterilizing equipment and food preparation. Solar Turbines notes, “If utility power fails, the Solar turbine generators can operate in island mode disconnected from the grid.”

It doesn’t require engineering genius to recognize the efficiencies that combined heat and power applications offer an energy economy. Conventional steam-electric plants—those whose sole role is to make electricity—are comparative wastrels. Industrial boilers that only make steam for industrial processes such as petrochemicals are also inefficient. It doesn’t require intimate acquaintance with Carnot’s theorem or the second law of thermodynamics to understand that these technologies waste a lot of energy, which also means they waste money.

For decades, those who have sought to optimize the efficiency of stationary energy production have looked for ways to overcome those engineering and economic inefficiencies. They have traditionally zeroed in on combining power production and steam production for dual use. Today, that’s commonly known as combined heat and power, though the earlier nomenclature of choice was cogeneration.

If a plant has excess resources—steam or waste heat—it only makes sense to combine the two to maximize efficiency. As the American Council for an Energy-Efficient Economy (ACEEE) says, “While the conventional method of producing usable heat and power separately has a typical combined efficiency of 45 percent, CHP systems can operate at levels as high as 80 percent.”

Here’s a recent example. Great River Energy, a rural electric generation and transmission cooperative serving distribution co-ops in Minnesota and North Dakota, in November started up its Spiritwood station—shown in the photo at the top—near Jamestown, N.D. It’s a 99-MW lignite-fired generating plant that will supply process steam to a grain malting facility and an ethanol plant scheduled to open this year. While conventional coal-fired plants rack up heat-recovery efficiencies in the range of 30%, Great River Energy says Spiritwood will be about 60% efficient.

While Spiritwood is an exemplar of CHP, it has also demonstrated some of the problems of the technology, which once was a major U.S. growth business but has lagged of late. As Midwest Energy News reported, the $437 million plant was completed in 2012 only to be mothballed. The news service reported that “lower power prices, weak electricity demand and other lingering effects of the economic crisis, plus changes in ethanol subsidies and corn prices that killed the ethanol plant meant to buy the steam, meant Spiritwood could not operate cost-effectively.” Critics derided it as a failure. But another ethanol factory recently appeared on the scene, and the Spiritwood project came back to life.

According to the U.S. Energy Information Administration (EIA), the U.S. has some 70 GW of CHP capacity, amounting to nearly 7% of the total, most of it installed in the 1980s (Figure 1). The EIA said the “technology fills an important energy niche.” The mix, says the EIA, includes “25 MW in the industrial sector, 2 GW in the commercial sector, and 43 GW in the electric power sector. In 2011, the average capacity factor for generators at industrial CHP plants was 57%.” CHP in the electric power sector includes a number of gas-fired combined cycle units, owned either by non-utility generators or conventional investor-owned electric utilities, that provide steam to nearby industrial facilities or district heating. Commercial CHP plants typically operate as part of institutions like hospitals and universities, as with the University of Illinois system (another example is the New York University Cogeneration Plant, a 2014 POWER Top Plant).

Yet Spiritwood’s revival highlights a problem for CHP projects. They often depend on government sponsors and government subsidies to move forward and provide markets for their electricity, although less-regulated steam sales to industry are not as difficult. Industrial CHP projects also frequently encounter obstacles in getting connected to conventional private-sector electric utility markets, both in organized wholesale markets such as the PJM Interconnection and in legacy regulated markets that characterize much of the South. Such plants are typically not dispatchable and thus have had difficulty bidding into competitive wholesale markets. In regulated markets, conventional utilities have traditionally looked askance at customer-owned generation that they can’t control but for which they have to provide interconnection and ancillary services.

That means that the most attractive markets for CHP projects often are public power systems, such as Great River Energy and municipal electric systems, and the federal government. In those cases, the CHP projects don’t represent a threat to conventional regulated utilities. Again, though, a major complication is how these plants fit into the bidding processes for the wholesale competitive markets. Issues of dispatchability and interconnection also become obstacles to CHP.

A November policy conference of the Combined Heat and Power Association in Washington highlighted the dependence of the CHP producers on government markets. The morning keynote speaker for the one-day meeting at the posh Park Hyatt in Washington’s West End was Kate Brandt. She is the executive branch’s “federal environmental executive,” a White House position created by executive order. She described herself as the federal government’s “chief sustainability officer.”

Brandt noted that CHP is an important part of the federal government’s program to increase energy efficiency, both as a way to save taxpayer dollars and to reduce greenhouse gases. The federal government, she said, is “the single largest energy user in the country,” with an eye-popping $25 billion annual fuel bill. One of her tasks, she said, is to help figure out how “CHP can help to achieve our federal energy goals,” including 40 GW of new CHP capacity by the end of 2020. That’s a target in a 2012 executive order President Obama issued, which would represent a doubling of federal CHP systems.

In September, for example, the Department of Defense announced it would fund a 7.9-MW CHP system to replace a steam generation plant at the Aberdeen Proving Ground in Maryland, some 30 miles north of Baltimore, that is being decommissioned in 2016. That CHP project, said Brandt, “will provide 86% of the site’s steam supply and offset 50% of current electricity use.”

Though the concept of generating both power and steam from one plant has been around for a long time, in the U.S. it first appeared on the policy horizon in the midst of the energy crisis in the 1970s, when a variety of factors drove up oil prices by an order of magnitude. In 1978, along with many other pieces of energy legislation, Congress passed the Public Utility Regulatory Policies Act (PURPA). Among other provisions, PURPA created a major incentive for cogeneration, which then launched the competitive wholesale electric markets that dominate most of the U.S. today.

Under PURPA, a power plant that used at least 5% of its steam output in a non-power application qualified for high prices for the power it sold—which the local utility was obligated to buy. Conventional investor-owned utilities had long resisted paying for power produced by industrial facilities that were making process steam with electricity as a byproduct, but PURPA changed the rules of the game. It required the utilities to buy power from a qualifying facility (QF) at the “avoided cost” of new utility generation, costs that were generally higher than the costs to the cogeneration plants to produce electricity. In short, it was a bonanza for the cogen plants.

While there was much controversy and litigation, the law and its avoided cost provision kicked off a major boom in CHP projects. New and successful firms arose to become non-utility generators, such as AES and NRG (which have evolved and survived) and Cogen Technologies (which did not). Many of the early plants were located in areas such as Texas and Louisiana where natural gas was plentiful and process steam valuable for petrochemical processing. Quite a few of these continue operation as viable facilities today.

But not surprisingly, PURPA also spawned projects that sought to game the rules. Plants sprang up that were generating electricity from gas, recovering heat to make steam, and then diverting 5% of the steam to niche applications such as heating greenhouses for commercial production of roses or warming water for fish farms. It was perfectly legal, but it drove the utilities that were forced to buy the power at high prices into a political frenzy. They called them “PURPA machines,” objected to the gaming of the law, and mounted a major lobbying campaign for a change in PURPA.

Congress responded in 2005. As part of a larger energy law, the solons decided that the electricity market had changed. In large parts of the country, utilities were no longer the buyers—or even generators—of power. The Independent System Operators were the boss. So the 2005 energy law “excused” utilities from buying QF power from the cogenerators if, according to a PURPA manual written by the nation’s electric utility trade groups, the QF has access to a sufficiently competitive market to sell its power. Specifically, no purchase obligation exists if the Federal Energy Regulatory Commission finds that the QF has nondiscriminatory access to either of the following:

That effectively marked the end of the heyday of cogeneration under PURPA.

Since then, developers of industrial CHP projects have focused on markets that aren’t subject to the terms of the 2005 federal law: public power systems, state agencies (including colleges and universities), and the federal government. Selling power output to utilities and the wholesale power markets has been more difficult.

Recently, the ACEEE scored how states are adopting CHP generating strategies. The results show wide disparities. Some, for example, credit CHP projects in their renewable portfolio standards, while others have erected barriers to interconnecting them to the electric grid. According to the ACEEE report, California is the leader in new CHP facilities, “with over 90 installations over the last two years, but Connecticut and Massachusetts also have high levels of deployment relative to other states.”

Conversely, said ACEEE, “many states, including those with strong manufacturing bases like Indiana and Michigan, received low scores due to poor policies and have few new installations over the past few years.”

Said the ACEEE, “Several barriers impede the full realization of the country’s CHP potential. These include electric utility rate structures that discourage utility investment in CHP, a lack of common and fair interconnection and net metering standards, discriminatory utility standby rates, and emissions regulations that do not recognize the improved efficiency and pollution benefits of CHP systems.”

But the energy efficiency group has hopes for the future of CHP, noting that “states with resiliency-focused programs and goals, such as New Jersey, Connecticut, and New York have seen growth in CHP deployment since Superstorm Sandy, and likely will continue to see that in the future as well.”