Construction of the world’s first nuclear power plant to use U.S.-based Westinghouse Electric’s AP1000 reactor technology commenced this April in China, with the pouring of 5,200 cubic meters of concrete at the nuclear island at Sanmen in Zhejiang province (Figure 3). The two-unit Sanmen plant will be built in three phases, with the first reactor beginning operation in 2013 and the second in 2014. 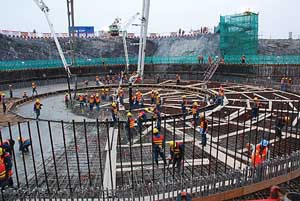 3. Setting it in concrete. The pouring of 5,200 cubic meters of concrete into the foundation for a two-unit nuclear power plant at Sanmen, in Zhejian province, China, marked the official start of construction on the world’s first AP1000 project. China’s State Nuclear Power Technology Corp. has also contracted Westinghouse Electric and consortium partner The Shaw Group to supply and construct two other AP1000 units at Haiyang, in Shandong province. These plants are expected to begin operation starting in 2013. Courtesy: SNPTC

As construction proceeds on those units, work will also begin on two other AP1000s planned for a site in Haiyang, in Shandong province, as promised under a 2007 contract between Westinghouse Electric and China’s State Nuclear Power Technology Corp. (SNPTC).

China now has 11 nuclear power reactors in operation. Three of these use domestic technologies, two use Russian technology, four use French technologies, and the remainder are Canadian-designed. Spurred by rapid demand growth and climate change concerns in recent years, the country wants to fast-track its nuclear capacity to 60 GW by 2020.

Although the nation will consider a diverse array of reactor designs, the AP1000 will play a major role, according to SNPTC. The four AP1000s at Sanmen in Haiyang are being built under China’s "self-reliance program," which means that the reactors will be mass-produced and deployed in China under the leadership of SNTPC. The SNPTC anticipates that Sanmen island, for example, will eventually house six AP1000 units.

The pouring of concrete at Sanmen for China’s first third-generation reactors also marks a major milestone for Westinghouse Electric. Toshiba Corp. (which purchased Westinghouse in 2006) supplied the world’s first pressurized water reactor in 1957 to a plant in Shippingport, Pa., and today its technology is the basis of about a half of the world’s operating nuclear power plants, including 60% of those in the U.S. But the company’s new generation of reactors haven’t seen the same degree of success — even though the AP1000 is the only third-generation reactor to be certified so far by the U.S. Nuclear Regulatory Commission. In fact, the $5.3 billion deal clinched with China for the four AP1000 reactors in 2007 was Westinghouse’s first for a nuclear reactor since 1987.

Interest in the AP1000 is certainly picking up, however. In the U.S., Westinghouse and the AP1000 have been identified as the supplier and technology of choice by at least 14 possible new plants in the U.S., including six for which the company has signed engineering, procurement, and construction contracts. Meanwhile, the UK — whose preparation for new-generation nuclear builds is generating interest from companies all over Europe — is now assessing for certification only two new reactor designs: The UK-EPR, designed by AREVA and Électricité de France, and Westinghouse’s AP1000.