The operators of a new combined-cycle plant being run in two-shift mode (on 16 hours, off 8) had become used to the cation conductivity sample of the condensate pump discharge being in alarm for a while following each day’s start-up. Normally, after a few hours of operation, the reading dropped to an acceptable limit. So, when cation conductivity didn’t drop as usual and the alarm never cleared, a problem wasn’t caught in time. Scratching their heads over the high reading, the operators guessed, “Maybe the cation column needs to be replaced.”

Weeks later, what had been a small condenser tube leak suddenly became big enough to contaminate the plant’s heat-recovery steam generator (HRSG) and steam turbine. Although the large leak was quickly detected and the plant shut down, it took nearly three months to clean up and recondition the turbine. Despite the repairs, the long-term damage done to the expensive new turbine is still really anybody’s guess. Had the operators not ignored the high cation conductivity reading at the condensate pump discharge, they would have known they had a problem. Locating and plugging the leaking condenser tube would have been easy and would have avoided the repair costs and millions of dollars in lost generation revenues.

Unfortunately, this kind of story has become commonplace. A change in cation conductivity has been the first indication of many problems, but it has been ignored until major contamination occurs. Nevertheless, some operators have said that it is unnecessary (and, in some cases, impossible) to strictly follow ASME, EPRI, or a turbine manufacturer’s guidelines for cation conductivity. Their comments might suggest to some that the parameter is no longer important.

To be sure, some conventional fossil fuel–fired boilers and combined-cycle plants have operated for many years with the cation conductivity of feedwater or steam at levels well above what is considered normal. Indeed, one combined-cycle plant has been run for more than 15 years with cation conductivity more than an order of magnitude higher than the recommended limit of 0.25 µS/cm (microSiemens per centimeter) without causing corrosion or cracks in its turbine. Here’s why this plant has avoided problems. Because its water supply has significant concentrations of naturally occurring organic compounds, it adds both organic amines and a carbon-containing oxygen scavenger (a reducing agent) when preparing makeup.

Another case of unexpected immunity occurred at an older plant that recently purchased its first cation conductivity analyzer. Following installation, the unit immediately indicated a high level in feedwater, and the cation resin columns were exhausting in a few days. This plant’s condensers have stainless steel tubing that has never leaked. I have regularly inspected the boilers, deaerators, and other equipment at this plant for several years. The steam drum and tubing are in excellent condition. Every time the turbine is inspected, there are no signs of cracking or pitting. As at the other plant, the additions of amine and the CO2 picked up by the condensate drive feedwater and steam cation conductivity high.

Is cation conductivity so important that high values justify taking a unit off-line? Or should the parameter be ignored in favor of other analytical chemistry tools?

Based on the experience of M&M Engineering Associates, measuring cation conductivity remains one of the most sensitive, simple, and reliable tools for detecting small amounts of contamination in feedwater and steam. Working in concert with sodium and other monitoring, cation conductivity monitoring can confirm that your feedwater is clean enough to be turned into steam that won’t damage your turbine. However, many operators find it difficult to interpret cation conductivity readings, particularly at plants whose steam generators use water containing either naturally occurring or purposefully added organic compounds.

To understand the difficulty, it’s important to know what cation conductivity is and is not.

Actually, “cation conductivity” is a misnomer. A more precise name would be “cation-exchanged conductivity,” because it is a measure of the conductivity of a solution after it has been passed through a strong acid cation exchange resin. This resin exchanges all the cations in the sample for hydrogen ions. In high-purity samples (such as of condensate, feedwater, or steam), the cation exchanged is primarily ammonium ions. What passes through the resin unscathed are all the anions in the sample. These are primarily anions of dissolved carbon dioxide (bicarbonate), the anions of any organic acids such as formate or acetate, and (it is hoped) traces of chloride and sulfate.

Because the ammonium ion is removed and exchanged for hydrogen, the pH of the water exiting the column is more acidic than it was entering. This has led some to use the term “acid conductivity” to describe cation conductivity. 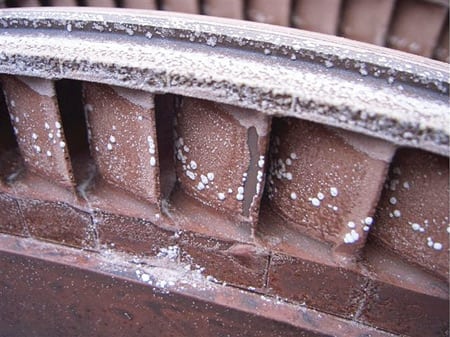 1. Scaled up. Proper attention to cation conductivity monitoring might have prevented this damage to turbine blades. Courtesy: M&M Engineering Associates

What makes cation conductivity monitoring so valuable is that contamination of feedwater or steam is rarely due to a single contaminant. When a condenser tube springs a leak, chloride, sulfate, carbonate, and many other anions contaminate condensate and feedwater. The combined effect will significantly raise cation conductivity and provide the desired early warning even when the individual contamination levels are small. Of course, if there is a large contribution from CO2 or organic acids, the problem may not be detected until it is too late. Carbon dioxide in steam is too volatile to create a low-pH environment for turbine blades and therefore cannot cause corrosion. Whether or not organic acids can damage a turbine is an area of active research.

Turbine manufacturers are very aware of the long-term damage that can be caused by even low levels of chloride and sulfate. The simplest, most reliable way to detect such contamination in real time has been cation conductivity. Therefore, turbine OEMs have set cation conductivity limits where a significant contribution from CO2 or organic acids cannot be tolerated.

During plant commissioning, for example, CO2 and other organic chemicals in first steam can raise the cation conductivity level so high that meeting the warranty limits specified by the turbine manufacturer(s) seems impossible. This leaves the plant two unpalatable options: invest in additional water treatment equipment to remove the offending organic chemicals, or use a more sophisticated tool—such as ion chromatography—to prove the absence of chloride and sulfate in the steam. Turbine original equipment manufacturers often require that, during routine start-ups, the cation conductivity of steam be less than 1 µS/cm before it can be admitted into the prime mover. Sampling problems and CO2 in the condensate can result in levels higher than that, unnecessarily delaying start-ups.

Because cation conductivity is so simple and reliable, significant efforts continue to be made to improve the technique by removing interferences from carbon dioxide, in particular. The new parameter to be monitored and analyzed goes by the name of degassed cation conductivity. Because the pH of the sample following the strong acid cation resin is acidic, most, if not all, of the CO2 in the sample is in the form of a dissolved gas. The most common way to remove it is to drive it off with heat using a reboiler. After the sample is passed through the strong acid cation resin, it is heated to near boiling, cooled to 77F, and then sent to a conductivity meter.

The most common complaint about reboiler-style degassed cation conductivity is unreliability. The temperature control of the reboiler is critical—too low or too high produces unreliable results. What’s more, the temperature of the sample after the reboiler can affect the result.

The CO2 also can be removed by sparging it out with nitrogen gas through an empty or packed column. Nitrogen purge systems are typically only used during start-ups until the regular cation conductivity value drops to a normal level. The systems’ nitrogen consumption rate makes them impractical for continuous use. For units that only experience high cation conductivity during start-ups, nitrogen sparging may be all that is required.

A relatively new technique uses a spinning-disk reactor and CO2-free air as the purge gas. The air is first passed through a molecular sieve to remove all the CO2. The water sample passes through the cation column and then is mixed with the CO2-free air and put through the reactor, whose large surface area creates air bubbles that strip the CO2 from the sample. The reactor removes about 70% of the CO2, so it does not completely remove the interference. But the results are good enough to get within the desired limits. This method does not require heating or cooling the sample.

Because some plant operators and chemists have had problems with degassed cation conductivity monitoring, they have looked for other ways to detect parts-per-billion levels of contamination in condensate. Here are three that we have seen used successfully. 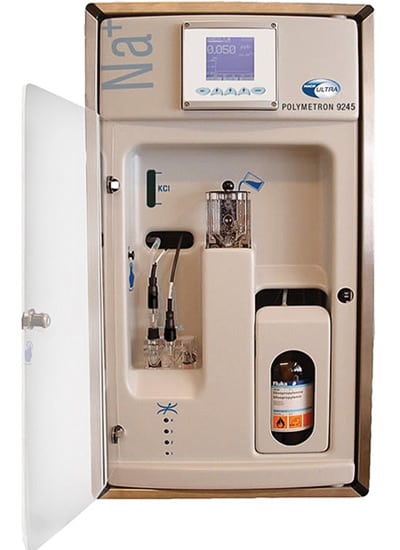 Most cooling water contains sodium concentrations of the same order of magnitude as those for chloride or sulfate. Therefore, sodium detection in condensate, even at the 0.1 ppb level, becomes an excellent early warning system for condenser tube leaks or sodium leakage from water pretreatment systems. However, sodium analysis doesn’t address chloride or sulfate concentrations directly. For that reason, M&M strongly recommends using both cation conductivity and sodium monitors not only on the main steam sample but also at the hotwell or condensate pump discharge (or, if there are condensate polishers, downstream of them). Sodium monitoring is the only way to detect caustic contamination.

Chloride. As part of its Orion line, Thermo Fisher Scientific offers a chloride monitor that can detect levels as low as 0.1 ppm (Figure 3). Though this sensitivity level is insufficient to detect contamination of feedwater, it has been used very successfully to continuously monitor chloride levels in boilers and HRSGs. Because contamination quickly concentrates in steam generators, this instrument can provide the desired early warning. 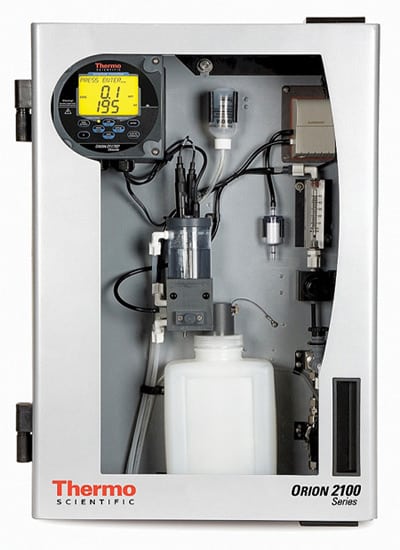 3. No moving parts. According to the manufacturer, the Orion 2117XP chloride monitor holds calibration up to 60 days between reagent changes. The instrument can measure chloride concentrations as low as 0.1 ppm. Courtesy: Thermo Fisher Scientific Inc.

Those who make that commitment usually end up feeling it was worth the effort. For example, lab techs at a large coal-fired plant that for years has used an on-line ion chromatograph from Dionex Corp. (www.dionex.com) have been very pleased with the results. By the way, the plant’s control room operators still use cation conductivity analyzers to monitor feedwater purity. Why? Ion chromatography analysis of a single sample for chloride, phosphate, and sulfate can take quite a few minutes. And if you’re measuring multiple sample points, you may only get one analysis per point per hour. Cation conductivity measurement, on the other hand, is essentially continuous.

Whether you monitor cation conductivity or degassed cation conductivity alone or in combination with other analytical techniques, it is essential that your instruments be reliable, on-line continuously, and sensitive enough to detect contamination early enough to take corrective action to prevent corrosion.

You would never think of operating your car at night without headlights. Don’t operate your steam turbines and HRSGs without the tools to see what’s coming down the road soon enough to steer away from problems. Like driving in the dark, the risks of operating a plant “blind” are far too great.

—David G. Daniels (david_daniels@mmengineering.com) is a principal of M&M Engineering Associates and a contributing editor to POWER.