The push for renewable energy purchases comes in two ways: the mandatory purchase (driven primarily by state renewable portfolio standards) or voluntary procurement (driven by utility, city, state, and corporate nonmandatory off-take). Traditionally, utilities entered into long-term power purchase agreements (PPAs) with renewable energy facilities that provided certainty on off-take and made these projects financially feasible. Lately, with not many utility PPAs available in the market, renewable energy generators seek corporate entities that are emerging as counterparties on such long-term deals. Corporates bring in a different set of risk appetite (as compared to a utility) and have been developing, innovating, and negotiating new off-take arrangements.

What looks like a fierce competition among these large companies, such as Facebook, Google, Microsoft, Apple, and others that aim to decarbonize the impact of their operations, is also paving the way for other companies to step up the game to bring more renewables onto the grid. Increasingly, when large corporate buyers negotiate “green tariffs” (discussed in detail later) with a local utility, they end up creating rate schedules that benefit other commercial and industrial (C&I) customers hooked to the same utility.

For example, Facebook worked with Omaha Public Power District to create Rate 261M—a program for large-power, high-voltage-transmission-level customers, particularly those using renewable energy—that others can subscribe to as well. Absent meaningful federal support, these voluntary procurements are principally driving the clean energy transition in the U.S. and abroad.

By procuring more renewables, companies benefit from hedging against rising electricity costs, can claim to be carbon-neutral, and act as a “financial additionality” provider to a new renewable energy generation resource. The voluntary procurement announcements, specifically in the U.S., have been from cities, states, utilities, and corporates. For discussion purposes, this article will only cover corporate renewable procurement.

WANT TO LEARN MORE? You can join the discussion and get expert insights into how companies are integrating renewable energy and distributed power generation as part of their business by attending POWER’s Distributed Energy Conference in Denver, Colorado, Oct. 30 – Nov. 1. Sessions include a look at how commercial and industrial PPAs are developed and written.

According to Lawrence Berkeley National Laboratory (LBNL), mandatory renewable portfolio standards (RPS) in the U.S. created a total obligation of 210,000 GWh in 2018. In contrast, the cumulative renewable procurement deals by corporates through 2018 amounted to close to 15 GW of capacity (about 30,222 GWh, assuming a 23% capacity factor), which translates to about 14% of the total RPS obligation. The contribution of individual cities, states, and utilities would be incremental to what corporates are procuring, bringing the overall voluntary purchase volumes up to significant levels. The Renewable Energy Buyer Alliance (REBA) tracks new corporate renewable energy contracts as they are announced. With Google’s latest announcement, the 2019 deals would go well over the 5-GW mark (Figure 1). 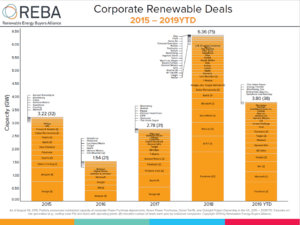 There are several off-take arrangements that corporate entities have at their disposal. These are the physical PPAs, the virtual PPAs, and green tariffs.

Physical PPAs are the most basic type of arrangement between a corporate buyer and a project developer, wherein the latter delivers physical energy (or title) to the corporate buyer. The project developer is paid the price as agreed in the PPA (with an option of an escalator), and holds exclusive rights over renewable energy certificates (RECs). RECs are the way U.S. corporates can claim renewable energy use; most corporate deals have a bundled form of arrangement, wherein RECs are bought along with the associated energy. The local utility and system operators are paid for wheeling the power from the generation plant to the point of consumption. Physical PPAs are best suited for buyers that have concentrated loads, and in most cases require the load and projects to exist in the same energy markets. In this type of arrangement, because the buyer takes title to the energy at the delivery point, it is required to obtain a market-based rate authority by the apex regulator—the Federal Energy Regulatory Commission (FERC).

A virtual PPA (VPPA) is sometimes referred to as a “synthetic” PPA, a financial PPA, or as a “contract for differences,” all alluding to the same arrangement. A corporate buyer signs it with the project owner on top of existing methods for energy procurement. The corporate buyer keeps procuring energy through its existing agreements from their local utility. The buyer does not take title to electricity, and the developer or project owner sells power directly in the volatile wholesale electricity markets.

If the agreed-upon VPPA price is less than the locational marginal price (LMP), the difference between the LMP and VPPA price is paid by the developer to the buyer (Figure 2). The corporate buyer pays the developer for the hours when the LMP is lower than the VPPA price. Corporate entities would thus want the wholesale price to be higher, but in cases where their utility arrangements are also indexed with market pricing, the overall benefit is sometimes nullified. VPPAs are also bundled contracts, so buyers receive RECs corresponding to the energy settled, which they need to retire in a REC tracking system.

2. The structure of a VPPA arrangement shows how the corporate buyer, the utility, and the renewable energy project developer interact with each other. Courtesy: Suyash Agrawal

Green tariff is an arrangement for renewable energy off-take offered by utilities mostly in regulated markets. In this type of agreement (Figure 3), the utility supplies energy to corporate buyers from a facility or generation plant, which it either owns or contracts with an independent power producer to provide in the utility’s region. The corporate buyer pays a premium tariff (to the utility), which is approved by the state public utility commission. The structure of a green tariff agreement differs substantially from utility to utility, but it is generally for a long-term commitment and sometimes corporate buyers have ownership rights over the project. Green tariffs also allow the corporate entities to demonstrate a commitment to new renewable energy development as this is a form of utility-sleeved PPA. Green tariffs differ from “green pricing” programs such that green tariffs have longer-term obligations and the buyer has a say in where they would like to procure the energy.

3. The structure of a green tariff arrangement shows how the corporate buyer interacts with the utility and the renewable energy project. Courtesy: Suyash Agrawal

Traditional PPAs expose corporate buyers to several risks, including weather-related risks such as the intermittent nature of wind and solar. The energy need of the buyer is inflexible, but a generation from renewable resources varies minute by minute due to factors such as rain, snow, and wind. This impacts the financial value of the PPA. Volume firming agreements (VFAs) (Figure 4), when paired with PPAs, effectively remove weather-related risks from PPAs and reallocates them to a third party like an insurance company. The third party charges a premium on top of the PPA price for assuming the risk, and guarantees renewable energy for every hour of the day. Microsoft recently showcased this arrangement by shifting these risks to insurance companies. In its statement, Microsoft made it clear that VFAs won’t be a replacement of PPAs, but something that will supplement an existing PPA.

4. The structure of a virtual firming agreement illustrates the interaction of the corporate buyer, the renewable energy project owner, and a third party, which assumes the risk within the arrangement. Courtesy: Suyash Agrawal

The above arrangements have provided significant impetus to renewable off-take deals in the past several years and are more suited for corporate buyers with relatively larger loads (like mega data centers, manufacturing units, etc.). Smaller customers and the corporates with operations dispersed across geographies sometimes don’t have the required scale (in one market) and are thus deprived of off-take opportunities.

REBA recently reported that five service-based corporates partnered and executed an entirely different type of arrangement. The five companies (Salesforce, Gap, Cox, Workday, and Bloomberg) aggregated their respective electricity requirements to collectively procure more than 40 MW in the PJM region. Each buyer executed similar but separate contracts of 5 MW to 10 MW, agreed to pay the same price, shared transaction expenses, and assumed no joint liability with each other. Such an arrangement could be a model for companies looking to expand their renewables purchases regardless of their size, location, or other factors. As we step into an era where businesses are more socially responsible, their customers are more environmentally conscious, and financial institutions are more willing to assume the risk and innovate, we will see more such deals.

Renewable energy procurement by corporate America is an exciting space to keep a close eye on, as these entities will spearhead any innovation that the energy supply side may warrant. As electricity market rules evolve to support greater clean-energy penetration, developers will need to adjust expectations off of these long-term deals. Corporate entities yet again will be expected to deliver the right and best solution to an evolving energy future.

—Nalin Deshpande is an analyst specializing in renewable energy services, and Suyash Agrawal is a business system analyst with a focus on utility IT systems. The views, thoughts, and opinions expressed in this article belong solely to the authors, and not necessarily to the author(s)’ employer, organization, committee or other group or individual.