At that moment – 1:23 p.m. — Zinn, colleagues from Argonne, and scientists from the National Reactor Testing Station in Idaho witnessed four small light bulbs glowing in the dim building housing the Experimental Breeder Reactor – 1. The machine, also known as “Chicago Pile 4,” or more colloquially as “Zinn’s infernal machine,” became the first in the world to turn the power of the atom into light for the world.

Zinn, a close colleague of Enrico Fermi, was the scientist who actually pulled the control rod out of Fermi’s pile in the squash court under the football stadium at the University of Chicago on December 2, 1942, starting the world’s first sustained chain reaction.

In 1946, Zinn proposed a reactor design that would produce more plutonium from U-238 than it would consume in highly-enriched U-235 fuel. It would, in fact, be a “breeder” reactor. The AEC approved a project to build a breeder in 1947 and, at Zinn’s insistence because of his fears of what might happen if the reactor failed in the densely-populated Chicago region, it was sent to Idaho for construction. The site was originally known as “Argonne West.”

Construction began in Idaho in 1949. A Chicago crew arrived in early 1951, as the reactor building was being completed, to install the core. In May, Zinn tried to operate the reactor, but it proved a dud. There wasn’t enough fuel in the football-sized core to sustain a reaction. It took another three months to get more highly-enriched uranium from the AEC stockpile and manufacture beefed-up fuel rods.

The tests culminated in the reactor reaching full power. Steam raised by the hot reactor coolant ran to a small steam turbine generator. The most enduring image of EBR-I resulted: four light bulbs glowing brightly from the first electricity produced from atomic power. The next day, the reactor was generating enough electricity for the entire building.

But the real mission of EBR-I wasn’t to generate electricity. It was to prove that the machine could make new fuel. In June 1953, the AEC announced that the machine, with a power output of 1.2 MW in heat (0.2 MW of electrical output, about the same generating capacity of a small, home backup, gasoline-powered generator) was making one new atom of Pu-239 for each atom of U-235 it was burning.

While it could breed new fuel, EBR-I had inherent problems. One was what the physicists call a “prompt positive power coefficient of reactivity.” In ordinary language, this means that as the power increases, the nuclear reaction speeds up. It is a positive feedback that can lead to an out-of-control reactor. The core could melt and collapse.

The scientists at Argonne understood this problem and used EBR-I to examine the instability of the technology. In late November 1955, during an experiment on the positive reactor feedback, some 40-50 percent of the EBR-I core melted. The Argonne West team removed the damaged core – very carefully – and repaired and operated tiny EBR-I until the end of 1963. A second reactor – EBR-II – operated as a breeder until 1969. 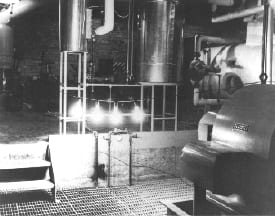 On Dec. 20, 1951, a liquid metal–cooled fast-neutron reactor
at Argonne National Laboratory illuminated—with the flash of four lightbulbs—the possibility that our world could be powered by nuclear energy. Source: DOE

In 1965, President Lyndon Johnson stood on the EBR-1 site and designated it as a national historic landmark. Johnson said, “We have moved far to tame for peaceful uses the mighty forces unloosed when the atom was split. And we have only just begun. What happened here merely raised the curtain on a very promising drama on our long journey for a better life.”

Unfortunately, Johnson’s optimism was somewhat misplaced. Breeder reactors at a commercial scale have proven to be an unnecessary dead end around the world. While the breeders are expensive to build and difficult to operate – the sodium coolant tends to catch fire – they respond to a problem that never materialized. Uranium is not in short supply, so there is no need for machines that create fuel more expensive than what they use.

But that should not detract from the achievement of EBR-1. It did what Walter Zinn designed it to do…and more.