Germany has embraced renewable energy in general—and solar power in particular—like no other country in the world. The key driver of "green" generation in Germany has been the Renewable Energy Law (REL) adopted in 2000. The REL (along with mandates for national CO2 reductions under the Kyoto Protocol) has been responsible for development of 2,000 biomass plants, 6,000 small hydro plants, 16,500 wind turbines—and 110,000 photovoltaic (PV) systems (see sidebar).

In 2000, Gerhard Schröder’s incoming government and his coalition partner—Germany’s Green party—passed the Renewable Energy Law (REL), without which the Bavaria Solarpark and other renewable projects in the country undoubtedly would not have come to fruition. Germany is serious about having renewable resources fuel 25% of generation in its electricity sector by 2020. By 2005, renewables’ share was 10.2%, so the effort is off to a good start. Landmark legislation such as the REL, and public policy initiatives now being implemented in other European countries (most notably, Spain) and U.S. states are seen as the best way to make power generation "greener" everywhere.

In general, REL guarantees fixed tariffs for putting "green-generated" electricity on the grid. Companies and individuals that decide to invest in photovoltaics, for example, receive from the national government an incentive of 51 cents/kWh (that’s not a typo) over 20 years, decreasing 5% a year over the project’s life. In combination with Germany’s existing PV funding program, which offers zero-interest loans, PV projects are considered very attractive. The market has responded accordingly: More than 40 MW of PV systems were installed within one year of the REL’s enactment.

Other renewable technologies are assigned similar 20-year subsidies (which are likewise adjusted down 5% annually) that U.S. developers would die for. Examples include:

The difference between the American and European approaches to promoting renewables could not be more striking. "Germany chose a price-fixing scheme, as have other countries such as Spain and France," said Johannes Lackmann, president of the German Renewable Energy Association. "In every case, the approach has contributed to the development of a stable market for renewable energies, particularly solar and wind power."

The latest available data indicate that $3.6 billion was spent on German PV projects alone in 2005, up from $2.7 billion in 2004. Two years ago, Germany generated 1 billion kilowatt-hours of PV power, and the solar industry there expects that number to rise to nearly 3 billion kWh by 2011. In 2005 alone, Germany’s installed PV capacity grew 53% to 837 MW, or 57% of the world market (Figure 1).

Sadly, the U.S. is an also-ran in this race. One part of the Bush administration’s tepid response to America’s "addiction to oil" is the "President’s Solar America Initiative" released this February. Although it proposes the largest increases in funding for solar energy research in U.S. history, the initiative focuses more on the long term than the short. Its stated goal is to make solar cost-competitive with traditional types of power generation in a decade, through the deployment of (a mere) 5 to 10 GW of PV capacity by 2015.

The comparative urgency of America’s and Germany’s policies for supporting renewable resource development is apparent. Germany made the costs of installing PV systems bearable now by guaranteeing 20-year interconnection contracts and having all customers share the costs of the subsidy, and the market responded in an instant. The result: Germany will surely break the 1 GW mark for installed PV capacity by the end of this year, further extending its lead. The downside of spreading PV development costs across all consumers, however, is upward pressure on rates: Average residential rates are now hovering at 18.6 cents/kWh, with taxes accounting for 7.3¢ of the total.

The 10-MW Bavaria Solarpark—christened by PowerLight Corp. (Berkeley, Calif.), Deutsche Structured Finance, and the other project partners (see table) on June 30, 2005—is the world’s largest grid-connected PV system, at least for now (see sidebar). The system consists of three individual parks in the cities of Mühlhausen, Günching, and Minihof. With 6.3 MW in Mühlhausen (Figure 2) and 1.9 MW each in Günching and Minihof, the project cost about $62.5 million to construct, based on current currency-conversion rates. That works out to a whopping $6,250/kW of capacity. 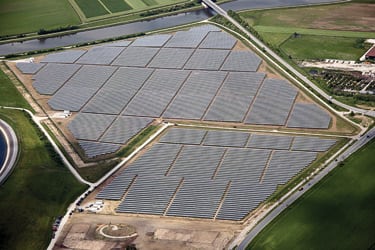 The 57,600 PV panels spread over 62 acres were erected on bucolic Bavarian fields, where herds of grazing Moorland sheep keep the grass short under the panels. Extensive planting enhanced the integration of the project site into the surroundings. Rumor has it that there’s a job opening for a shepherd at one of the plants.

PowerLight, which designed, developed, and built the entire system on a turnkey basis, also is responsible for servicing it. That’s important, because the system uses the company’s patented PowerTracker technology to follow the sun, maximizing solar "insolation" and output (Figure 3). The photovoltaic modules themselves come from Sharp Electronics. Siemens AG provided all electrical construction and equipment, including inverters. Interconnection to the electrical grid was provided by the regional German utility E.ON. 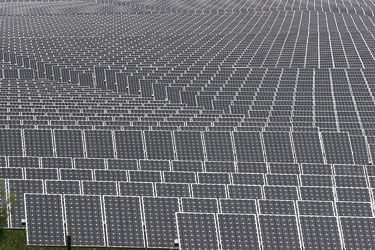 3. Solar sea. Banks of PV panels are vertically tracked against the path of the sun, maximizing solar energy collection, or "insolation." Courtesy: PowerLight

Given how far north the system is, it’s not surprising that 76% of its annual production takes place between April and September. Plant data from January to September 2005 confirm that the tracking system exposes the panels to 33% more solar insolation than horizontal systems, and to 15% more solar insolation than fixed, 30-degree tilt systems. The plant became 100% operational in December 2004, and it has been 100% reliable during all daylight hours since.

On June 6, GE Energy Financial Services, PowerLight Corp., and Lisbon-based Catavento Lda. broke ground on what will be the world’s largest photovoltaic (PV) power project when it is completed next January. The $75 million, 11-MW plant, comprising 52,000 PV modules, is under construction in Serpa, Portugal, 124 miles southeast of Lisbon in one of Europe’s sunniest areas.

GE Energy Financial Services is financing and will own the facility. PowerLight has designed and will operate and maintain the plant. Catavento, a leading Portuguese renewable energy company, developed the project and will provide management services. Deliveries of PV modules and structural steel have begun, and construction of an electric substation is under way. The project sits on a 150-acre south-facing hillside that will remain productive farmland. As mandated by legislation similar to Germany’s Renewable Energy Law, Portuguese utilities must purchase solar-generated electricity energy at a price close to 40 cents/kWh.

Who will next claim the title of largest PV plant? A top contender is Israel, which is building a 100-MW PV plant in the Ashalim area of the Negev to supply electricity to homes in the southern part of the country. Conceivably, that project’s rating could be expanded to a mammoth 500 MW, at a cost of $1 billion. A recent study found that Israel could produce 2,500 MW from solar energy, one-fourth of its current demand, by 2025.

Bavaria Solarpark was financed by Solar Energy Fund Bavaria, a closed fund in which private investors can still take shares. Under the REL, the fund benefits from a legally fixed payment for produced power.

"Over the next 20 to 30 years, the Bavaria Solarpark will generate hundreds of millions of kilowatt-hours of electricity with zero emissions," added Tom Dinwoodie, CEO of PowerLight. "We look forward to developing more partnerships across Europe to meet increasing demand for solar power."