Working together to reap the benefits of Indiana’s newest cash crop, Dominion and BP Wind Energy are using hundreds of wind turbines at the Fowler Ridge Wind Farm to harvest the state’s plentiful wind resources for electricity generation. The project will be built in multiple phases.

The Fowler Ridge Wind Farm’s first phase, which is located in Benton County about 90 miles northwest of Indianapolis, became fully operational in March 2009 (Figure 1). Phase I uses 222 wind turbines — 182 Vestas V-82 1.65-MW turbines and 40 Clipper C-96 2.5-MW turbines — for a total capacity of 400 MW. BP Wind Energy and Dominion are partners for 301 MW of Phase I, and BP retains sole ownership of 99 MW. The second phase of the project, to be located west of the existing wind farm, will use 133 GE 1.5-MW wind turbine generators and is expected to be online in the first quarter of 2010. It will be a partnership of BP Wind Energy and Sempra Generation. 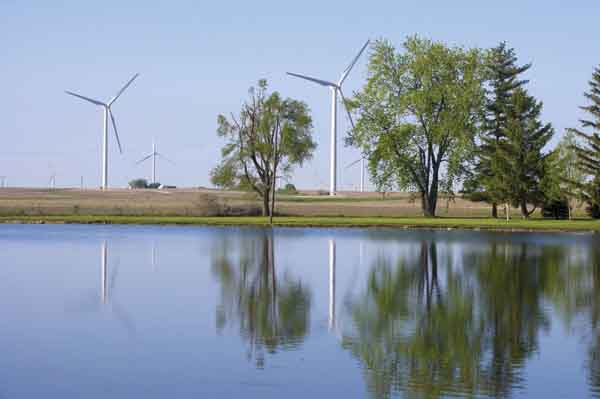 Fowler Ridge is one of the many new wind power projects being constructed across the U.S. In a recent report, the American Wind Energy Association (AWEA) points out that wind has become one of the world’s fastest growing energy sources on a percentage basis. U.S. wind power capacity has grown by an average of 32% each year for the past five years, 2004 through 2008, and now totals more than 31,000 MW.

Wind power has been second only to new natural gas for four years in a row as a share of the entire new generating capacity added annually in the U.S., according to AWEA’s calculations. Along these same lines, a 2008 U.S. Department of Energy (DOE) report found that wind energy could generate as much as 20% of the nation’s electricity — what nuclear power generates today — by 2030.

The DOE’s wind program and the National Renewable Energy Laboratory have studied Indiana wind resources. As part of their research, they investigated wind speeds at the level of 164 feet above the ground. As a renewable resource, wind is classified according to wind power classes, which are based on typical wind speeds. These classes range from Class 1 (the lowest) to Class 7 (the highest). Research showed that the highest wind resources in Indiana are found across the northern half of the state. In particular, Class 3 areas are located across the north-central region of Indiana. These excellent wind resources make Indiana an ideal location for wind farms.

Taking advantage of the strong Indiana wind resources, in 2008 the 130.5-MW Benton County Wind Farm began operating in the northern part of the county with 87 1.5-MW wind turbines. Duke Energy purchases electricity from this wind farm and sells it to customers through its GoGreen program.

In early 2009, the nearby Fowler Ridge Wind Farm was Indiana’s second wind farm to open and became the state’s largest. The addition of Fowler Ridge gave Benton County one of the largest concentrations of wind turbines in the U.S. east of the Mississippi River.

When interviewed by POWER in October, representatives of Dominion and BP Wind Energy stated that for reasons of commercial confidentiality, they were unable to comment on the exact cost of construction for Fowler Ridge (Figure 2). However, a standard wind industry cost is approximately $2 million per installed megawatt of capacity, they explained. This cost is consistent with estimates reported in the Wind 2008 Annual Report prepared by the International Energy Agency for U.S. projects completed in 2008. 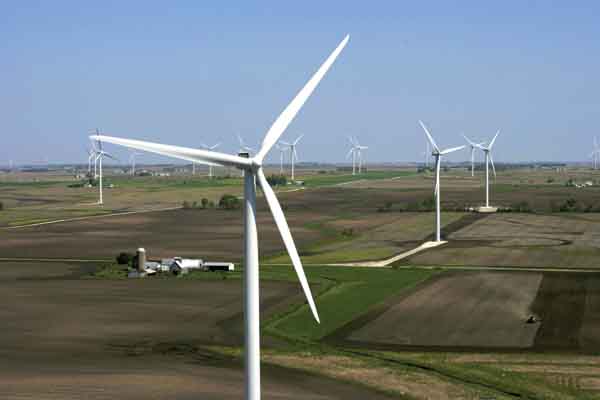 2.    Tractors and turbines. These turbines provide additional income for some 300 owners of the land where Phases I and II of the Fowler Ridge Wind Farm are situated and have minimal impact on existing farming operations. Courtesy: Dominion and BP Wind Energy

Dominion and BP Wind Energy representatives also addressed the important issue of the wind farm’s access to transmission lines. Aboveground transmission lines, which will be used by all phases, were constructed in a 25-mile corridor extending from the wind project substations in a southeasterly direction in order to connect to American Electric Power transmission lines located near Montmorenci, Ind. These lines connect into the PJM regional transmission organization grid.

Power from Phase I has been sold under three long-term contracts: two contracts, each for 100 MW with Indiana Michigan Power and Appalachian Power (both subsidiaries of American Electric Power), and one contract for 200 MW with Dominion Energy Marketing Inc., a subsidiary of Dominion. Power from phase two of the project has been sold under four long-term power purchase contracts, each for 50 MW. Three contracts are with operating units of American Electric Power and one is with Vectren Energy Delivery of Indiana.

Reaching out to the Community

Residents near the wind farm continue to be very supportive of the project because it is adding many benefits to the community, explained the Dominion and BP Wind Energy representatives. For example, Fowler Ridge provides a new source of income for some 300 owners of the land where Phases I and II are situated, with minimal impact to existing farming operations.

Other positive results of the project include these:

Given that many species of birds and bats live in the area, special precautions are being taken to ensure that large numbers of wildlife are not harmed by the wind farm’s operation, the Dominion and BP Wind Energy representatives explained.

As part of the wind farm’s development process, relevant stakeholders such as wildlife agencies, community representatives, and nongovernmental organizations (NGOs) are engaged. Preconstruction surveys are undertaken and are designed to identify sensitive resources within or near the project site to predict impacts on wildlife, minimize conflicts, and inform the facility personnel in charge of project design and the timing of construction when they are working near sensitive locations. Typically, the U.S. Fish & Wildlife Service is engaged along with state wildlife agencies and the appropriate NGOs as part of the effort to collect information about possible effects on threatened, endangered, and sensitive species and migratory birds in the area, as well as other potential wildlife impacts.

As part of BP Wind Energy’s standard operating procedures, it is undertaking a range of pre- and post-construction avian- and bat-monitoring activities. In addition, the company will continue the monitoring for two years once each phase of the wind farm project moves into commercial operation. 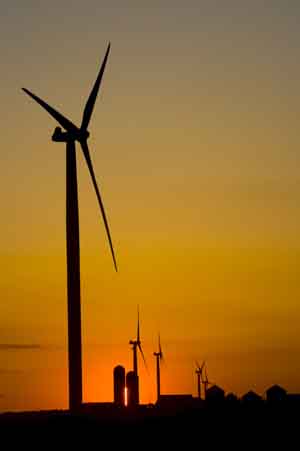 Currently under construction, Phase II of the Fowler Ridge Wind Farm will have a capacity of 200 MW. BP Wind Energy and Sempra Generation are joint owners of this phase. Dominion is evaluating the possibility of another phase, which would have a capacity of up to 150 MW. The output from Dominion’s 150-MW Phase III has yet to be contracted.

When all three phases of this project are completed, the Fowler Ridge Wind Farm will have a total capacity of 750 MW, which will make it one of the largest wind farms in the world. No doubt the economy in this part of Indiana will be getting a second wind from the additional energy, tax revenue, and jobs that the wind farm will generate.