The attraction of renewable energy sources is that nature continuously replenishes them. As fuels, they may not be infinitely renewable or completely environmentally benign, but they all have one thing in common: a smaller carbon footprint than fossil fuels. Examples that come to mind include power-generating geothermal energy systems that use deep wells to extract hot brine (POWER, December 2007, “Raft River Geothermal Project”) or naturally produced steam (Calpine’s Geysers Project in Northern California). Both are good examples of renewable, yet finite renewable energy sources.

Not all geothermal projects have a finite life, at least not as we normally characterize finite. Southern California inventor Bruce C. Marshall (www.marshallsystem.com) laments the lack of attention paid to a huge untapped renewable energy source—hydrothermal vents on the ocean floor. Magma from deep within the earth is constantly pushing its way to the surface, forcing the planet’s tectonic plates apart. As two plates separate, the rock below them partially melts to produce magma that rises and fills the gap and produces further seafloor spreading (Figure 1). 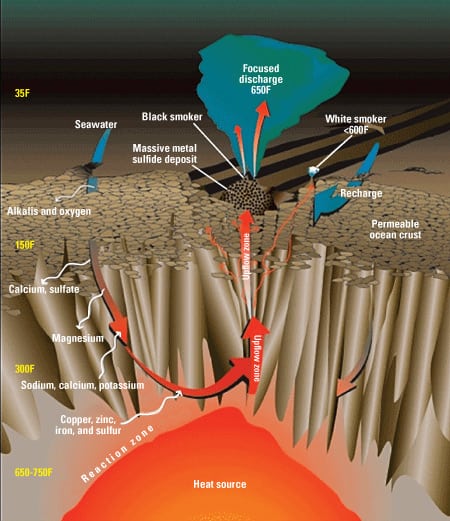 1. What lies beneath. Ridges are formed as tectonic plates pull away from each other, forming hydrothermal vents along the boundary. Source: U.S. Geological Survey

A tectonic plate is a massive section of earth’s crust (lithosphere) that “rides” on the asthenosphere, a hot, semiplastic layer. Tectonic plates move independently, sometimes colliding, sometimes sliding against each other. The earth’s surface has 10 to 12 major tectonic plates and many smaller minor ones. These plates, each about 60 miles thick, move relative to one another about 1 inch a year.

Hydrothermal vents are natural geysers of magma-superheated water found atop mid-ocean ridges across the planet at an average depth of 7,500 feet (Figure 2). Islands such as Iceland, Bermuda, and the Azores are products of tectonic plate movement along the Mid-Atlantic Ridge.

2. Where to expect earthquakes and active volcanoes. The red dots indicate known hydrothermal and geothermal locations. This is only a partial map, as there are tens of thousands of kilometers of mid-ocean ridges that have never been explored. Source: U.S. Geological Survey

Tectonic plate movement opens fissures on the seafloor into which seawater is forced down by the high pressure of the water column above it. Magma superheats the seawater to a temperature as high as 750F, creating a geyser (an underwater version of Old Faithful) with a velocity of 3 to 15 feet per second (fps). Because the pressures at depth are up to 3,200 psi, the hot fluid stream doesn’t flash into steam. But the cold surrounding seawater causes a cocktail of metals and minerals to precipitate out of the fluid and rain down on the seabed. Precipitates include iron, gold, silver, copper, and zinc, to name a few elements (Figure 3). 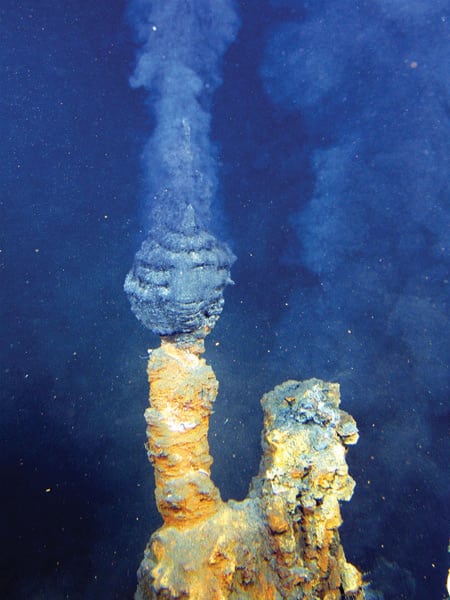 3. Thank you for smoking. Plumes from sites on the ridge crest are often caused by the intrusion of a magma dike during an episode of seafloor spreading. The hot fluids rise and are diluted by the surrounding seawater. Courtesy: U.S. Geological Survey

If you’re thinking that 7,500 ft is beyond human reach, think again. Oil and gas platforms in the Gulf of Mexico are located in water that’s 1 mile (5,280 ft) deep, and they support drills that go down another 7 miles or more. Mapping and tapping volcanic vents may not any more technically challenging than drilling for oil. It will, however, probably be much harder to capture hydrothermal energy and economically convert it to electrical energy.

With the cost of all kinds of energy rising, the appeal of undersea geothermal energy could grow to match its ubiquity and large scale. The sizes of the vents that have been surveyed are truly amazing. For example, the Juan de Fuca Ridge 200 miles off the coast of Seattle has an active vent field over 500 feet wide and 1,000 feet long. Within that field are more than 15 vents up to 90 feet in diameter that continuously eject water at 700F at a rate of 9 fps to 15 fps. Each of the vents theoretically offers 40 GW equivalent of thermal energy.

It’s a big jump from a scientist’s estimates to an engineer’s design of a hydrothermal energy system that will work reliably in an almost inaccessible location. Marshall proposes a system that would bring the high-temperature fluid to the surface through a network of insulated pipes to an offshore power plant on a platform similar to that used by oil companies.

According to Marshall, the fluid would rise “by a combination of vent flow velocity, convection, conduction, and flash steam pressure generated as the superheated fluid rises and the ambient pressure diminishes.” The closest analog that comes to mind is a direct flash geothermal system, although in this case the “brine” would either be returned to the sea bed or processed to extract its mineral content. This approach would need to overcome the known propensity of geothermal fluids to erode and coat pipe surfaces.

A second, and perhaps more-practical approach, would be to mimic the closed-loop ground-source or geothermal heat pump. In this case, the hydrothermal system would use a heat exchanger to absorb energy from the ocean vents, rather than a ground-source heat pump to reject energy to an isothermal earth or lake. The working fluid would transfer its heat energy to a binary power system much like those used by today’s geothermal plants. An obvious obstacle is the significant amount of auxiliary power needed to recirculate the working fluid. Natural circulation caused by the fluid density gradient will reduce the pumping power needed, but by how much remains unclear. The electricity would then be moved to shore through a system of undersea high-voltage DC cables (Figure 4). 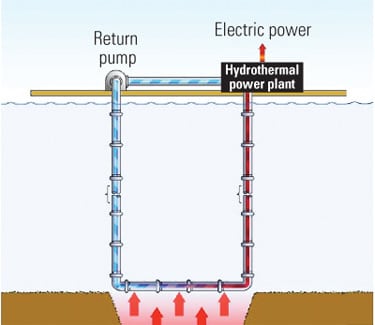 4. Energy from the ocean. Collecting thermal energy from vents on the ocean floor may be the ultimate renewable power generation scheme. Source: Bruce C. Marshall

Today, at least one thing is clear about hydrothermal energy: It has many technical and environmental issues that have yet to be identified. Recent explorations of hydrothermal vents by the U.S. National Oceanic and Atmospheric Administration and the Woods Hole Oceanographic Institute have turned up an amazing variety of life forms that do not exist elsewhere on our planet. Among them are plants that use chemosynthesis, rather than photosynthesis, to stay alive at these black depths. Some scientists even believe that undersea volcanic vents were the force behind the creation of the “primordial soup” that led to the first life forms on Earth. I’m not willing to go that far, but it doesn’t take much of an imagination to think of some the environmental issues that tapping hydrothermal energy would raise.

Undersea vents were discovered just 30 years ago, and their potential for producing large quantities of power was immediately noted. The December 12, 2005, issue of National Geographic News carried a story about a hydrothermal megaplume in the Indian Ocean that is almost 1 mile long and is thought to have the energy equivalent of 100,000 MW. The story went on to estimate the thermal output of all the known vents in the world at about 17,000,000 MW—about the same as current worldwide power generating capacity. Other major vents are known to be located off the coasts of the U.S., China, Japan, Korea, and South America, and in the Mediterranean Sea and Dead Sea. And there remain tens of thousands of miles of ocean ridges yet to be explored.

“Whatever one man is capable of conceiving, other men will be able to achieve,” wrote Jules Verne. So suspend your disbelief for a moment and consider the potential of hydrothermal energy. You have to admit the concept is intriguing.

Marshall is not Jules Verne, but both men have an interesting vision of how renewable energy from the ocean might support mankind. For example, if a closed hydrothermal power cycle with an efficiency of just 1% were to be applied to the 15 vents mapped at the Juan de Fuca Ridge, we’d have 6 GW of dispatchable renewable equivalent capacity.

At this point, the problem of how to harness this vast reservoir of thermal energy at the ocean floor may not be ready to turn over to a Thomas Edison or Henry Ford. However, the idea does deserve further investigation by experts in deep ocean platform drilling, volcanologists, biologists, and a geothermal power plant engineer or two. I’d be interested to see what they come up with.