Geothermal energy has been around forever, used as a heating source across the world. Today it has surfaced as another renewable resource, with advancements in drilling technology bringing down costs and opening new areas to development.

In conjunction with the feature article on geothermal in the May 2019 issue of POWER, we sought opinions from a pair of leading experts in the sector: Will Pettitt, executive director of the Davis, California-based Geothermal Resources Council, and Torsten Rosenboom, a partner in the Frankfurt, Germany, office of global law firm Watson Farley & Williams LLP.

POWER recently interviewed Pettitt and Rosenboom to get their opinions about the future of geothermal energy:

What can we expect with regard to global growth in geothermal energy? Are there any regions where significant growth is expected?

Pettitt: Geothermal energy, I believe, has a really exciting and bright future. Geothermal power is a renewable energy that provides flexible baseload. It can provide the electricity grid with resiliency, reliability, and stability as we transition to more and more renewable fuels.

It is a stable 24/7 power source with capacity factors [higher than] 70% in practice, higher than any other power resource except nuclear. It can also be ramped up or down, so is flexible to give power when it’s needed and can help balance the grid when intermittent renewables come on or off.

Rosenboom: Geothermal development has mostly seen a move toward power generation and, while there is gradual growth, it has not advanced exponentially like wind and solar energy. Some regions have shown visible signs of geothermal development, including in East Africa, Southeast Asia and Latin America. The International Geothermal Association expects an increase of up to 4,000 MW in the next 5-6 years. Heating is now proving to be the main area of interest for geothermal development. For instance, China has initiated a large smoke-free-city campaign, with ambitions to expand geothermal district heating and clean up its air.

Munich in Germany, and the Netherlands are utilizing geothermal heating and so are many other countries in Europe and beyond. With the option of developing geothermal energy for electricity generation, heating and cooling, as well as in other areas such as agri-food production, it makes it a rather interesting source of energy for the future.

Pettitt: The U.S. is the largest producer in the world but other countries are also doing well at developing their resources. The greatest developers of power over the past 10 years have been Turkey and Indonesia, followed by the U.S., Kenya, and New Zealand. In the USA we have about 3.6 GW of installed geothermal capacity. We have about 1.2 GW being developed. A recent study at NREL estimates there will be 6 to 11 GW installed in the USA by 2050 (see below) using today’s technologies and depending on the policy environment. 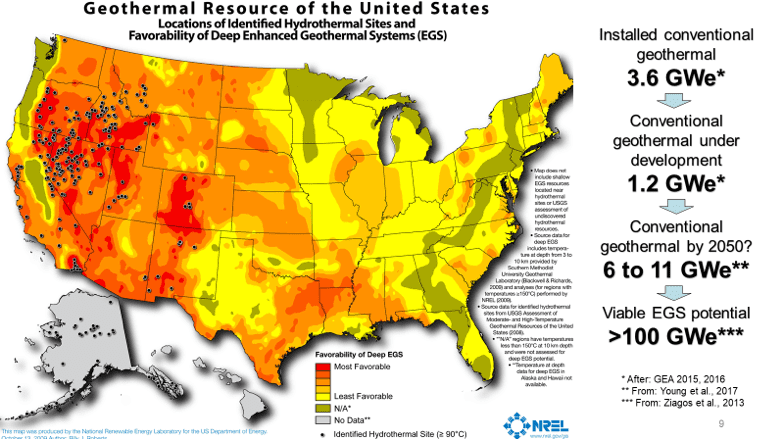 What are some of the technological advances we can expect to see that will support the growth of geothermal energy?

Rosenboom: Drilling and its resource risks are key challenges for geothermal development. This is being addressed with a variety of different approaches that both aim at making drilling cheaper and utilize the technology already established in the oil and gas sector, such as directional drilling. We are also seeing an increase in the use of so-called binary technologies that allow the operation of geothermal energy at lower temperatures for power generation. At the same time, we see new companies with different offerings in the power generation technology space with interesting business models … so there is movement.

Pettitt: The geothermal industry also has great existing technologies, and new technologies being developed that will allow easier and more efficient access to resources. We also have talented people who are passionate about the technologies that we have, the renewable-energy mission, and the future of our industry. Geothermal energy is therefore well-placed to be a facilitator of the transition to renewable energy.

Enhanced or Engineered Geothermal Systems (EGS) offer a game-changing landscape for geothermal energy. If EGS is successful then more than 100 GW of power is conceivable in the USA alone according to government studies. In the U.S., current power production is limited to the western states with California being the largest producer and having the largest geothermal field in the world. However, the earth is hot everywhere it’s just how deep we want to drill and how the economics stacks up. If commercial EGS becomes viable then we can tap into that resource almost anywhere.

In my view there are three technology pieces that need to come together for EGS to be successful: 1) creating and maintaining the reservoir so as to ensure sufficient permeability without short circuiting; 2) bringing costs down on well drilling and construction; 3) high-temperature downhole equipment for zonal isolation and measurements. These technologies all have a lot of crossover opportunities to helping conventional geothermal be more efficient.

How important (or not important) are government subsidies to the growth of geothermal?

Pettitt: What we need to do as a renewable energy industry is appreciate that we need all sources of renewable power to be successful and that intermittent sources of power need the baseload sources to get to a 100% renewable portfolio. Geothermal therefore needs to be collaborating with the solar, wind and biofuel industries to make this happen.

Research projects into EGS are being performed all over the world. In USA there are two large projects funded by the DOE’s GTO (Geothermal Technologies Office) and by Bill Gates’  Breakthrough Energy Ventures. DOE’s FORGE EGS experiment is based in Utah. They selected the site last year and will now embark on five years of operating the site and performing research, development and experimental tests on technologies needed for commercial EGS. The DOE recently released their R&D roadmap for FORGE. The DOE is also funding other research projects that aim to develop conventional geothermal resources such as improving exploration techniques and development of Deep Direct Use.

Rosenboom: Government support has been a crucial element for many of the countries that have been developing their geothermal resources. But this support comes in many forms, subsidies are only part of it. Feed-in-tariff systems have been a key driver to get the industry off the ground, e.g. in Germany and in Turkey. Grant schemes have helped projects get off the ground, but are often paired with matching funding schemes. Geothermal energy is generally price competitive, but often not valued correctly with its baseload capacity.

As well as the drilling risks, high up-front costs for drilling make geothermal energy a challenging investment. Attracting investment into the sector has seen many approaches by governments and multilaterals, such as the World Bank. Most of them have been tailored to either de-risk projects or provide investment incentives in various forms. Government support and that of banks in the developing world have played a crucial part in geothermal development and will remain an important element to help the geothermal sector grow.

What are the environmental concerns with regard to geothermal?

Rosenboom: Geothermal energy is essentially a renewable and clean source of energy, if managed correctly. There are general concerns regarding the sustainability, emission, noise of drilling operations and even earthquakes. All of these issues are being addressed by the geothermal industry and if not, a recognised regulatory framework has helped countries to enforce environmental safeguards for geothermal developers. Above else, geothermal energy is using the least amount of carbon-footprint for its operations compared to wind and solar installations, or even conventional thermal power plants.

How do the costs of a geothermal installation compare to those of a solar array or wind farm?

Rosenboom: Naturally, the cost of installation does not take into account the energy produced. So with the capacity factors by wind and solar installations of 20-40%, compared to around 90-95% of geothermal power plants, the cost per MW installed is not giving the complete picture. Globally, I think the cost for geothermal is described at around USD 4.5 million/MW.

The more accurate picture is given by the leveled cost of electricity generated and there, geothermal energy is competitive with the likes of fossil fuel-based power generation, particularly if it relates to the baseload capacity provided. With a decreasing cost of storage, we will have to wait to see how the advantage of baseload power of geothermal will be effected.

What types of companies are likely to invest in geothermal power? Where will investments come from, and are there other opportunities for the geothermal sector?

Pettitt: There are many other technologies that add value to geothermal power plants and can help facilitate greater deployment. For example, Berkshire Hathaway Energy, among other companies, is looking at the recovery of lithium through solution mining the geothermal brine. The supply of lithium is becoming of national importance as battery markets and technologies develop. The Salton Sea geothermal field in Southern California (Figure 1) is shown to be very cost competitive and could produce a significant portion of the world’s lithium demand.

Other similar opportunities include:

Rosenboom: With the large part of the funding needed to develop geothermal being equity, the main investors have either been large power companies or state-owned utilities/ operators, or private developers backed by private equity from a wide variety of funds. Banks providing project finance traditionally come in only after the drilling has mostly been completed, and geothermal projects qualify for traditional project finance in debt financing.

Among the investors are also often funds that have been either created by or are funded under development funding by nations. For example, the EU spends renewable energy funds to fund East African development. The World Bank and the Inter-American Development Bank have funded risk mitigation schemes to kick of geothermal development or even funded concrete projects. German KfW with the African Union has established a Risk Mitigation scheme in East Africa and a similar scheme for Latin America. This in turn has helped private developers and their backers to get projects off the ground, which then also created interest by equity arms of banks to get invested and later provide necessary project financing.