Sumitomo Electric Industries, Ltd., with the support of its technology partner, Südkabel GmbH, to deliver the highest voltage 525-kV XLPE(*1) Insulated High-Voltage DC (HVDC) underground cable system for German Corridor Project to supply renewable power generated in the North Sea of Germany to the central and southern part of the country.

Sumitomo Electric Industries, Ltd. (Sumitomo Electric) has been awarded a major HVDC underground cable project, Corridor A-Nord, by the German Transmission System Operator, Amprion GmbH. The project will form part of the so-called German HVDC corridor projects and is considered one of the most critical power transmission infrastructure projects in the country to support the “Energy Transition” of Germany to introduce more renewable energy to consumers and reduce the country’s CO2 emissions.

There are two projects; “Corridor A-Nord” in the northern part and “Ultranet” in the southern part. Both are part of a Multiterminal HVDC-Link, which connects three converter stations in the cities of Emden, Osterath, and Phillipsburg. Sumitomo Electric will be responsible for the design, manufacture, logistics, installation, jointing works, commissioning, and maintenance of the approximately 300-km-long cable route for Corridor A-Nord. Start of Construction activities is scheduled for 2023.

“It is a great honour for us to be awarded a project of this magnitude that will provide such important infrastructure for the German society. We are pleased that Sumitomo Electric’s state-of-the-art and innovative DC525kV cable technology has been recognised and highly regarded by Amprion, and we are committed to working together with Amprion to complete the project in a safe, timely, and reliable manner,” statement by Sumitomo Electric’s Managing Executive Officer, Yasuyuki Shibata.

In addition to the technology advantages, Sumitomo Electric has nominated Südkabel GmbH (SK), headquartered in Mannheim, as its German-based technology partner for the successful execution of the Corridor A-Nord Project. SK has adopted Sumitomo Electric’s unique insulation technologies, suitable for a hybrid system, where overhead line and underground cable are combined, and completed the type test in accordance with the CIGRE(*2) standard, including extensive polarity reversal condition needed for such hybrid system. SK will not only manufacture “Made in Germany” HVDC XLPE cables, but also provide engineering and management resources during the project implementation.

Masaki Shirayama, a member of Sumitomo Electric´s Executive Board, said, “Sumitomo Electric, in collaboration with Südkabel, will provide the best project execution combination to execute such an important project for the German society. Furthermore, Sumitomo Electric will utilise the group’s eleven (11) existing business bases, employing more than 3,000 people in Germany, to provide a fully localised solution, as a long-term project and business partner of Amprion.”

The Corridor A-Nord project is for underground cable system. On the other hand, there are growing needs for 525-kV HVDC XLPE subsea cables with a worldwide trend towards development of more offshore wind farms and interconnections between regions or countries where long distance, high capacity power transmission is needed. Sumitomo Electric is developing such offshore cables, including long term testing, so that it can contribute to the growing trend aimed at increasing the use of renewable energy and a reduction of CO2 emissions. 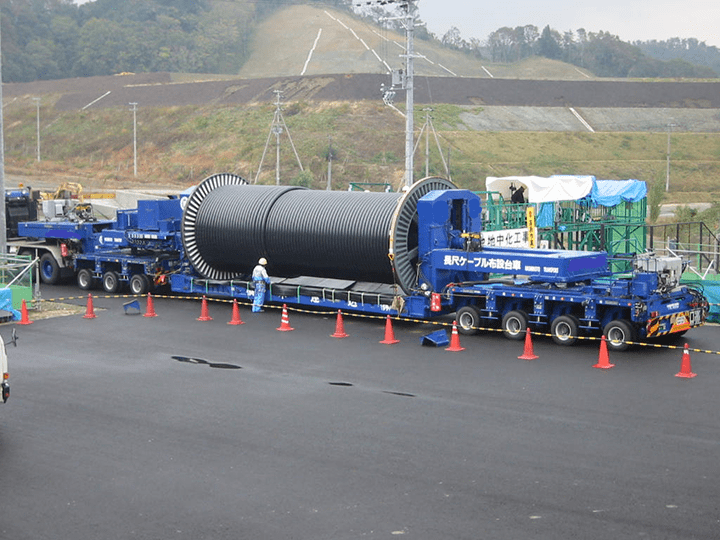 *1) XLPE stands for crosslinked polyethylene. Conventionally, mass impregnated cables using highly viscous insulation oil have been utilised for HVDC projects. In recent years, XLPE insulated cables have been commonly adopted by the market due to their high allowable operating temperature and growing environmental concerns. As of today, the maximum voltage for commercially used HVDC XLPE insulated cables is 400 kV with the NEMO Interconnector commissioned by Sumitomo Electric.

*2) CIGRE, established in 1921 in Paris, France, is a global community committed to the collaborative development and sharing of power system expertise. The community features thousands of professionals from over 90 countries and 1250 member organisations, including some of the world’s leading experts.

Sumitomo Electric Industries, Ltd. was established in 1897. Since then, based on electric wire and cable manufacturing technologies, we have conducted our original research and development and strenuously strived for the establishment of new businesses. These efforts have allowed us to create new products and new technologies, as well as diversify our business fields. Currently, we operate our businesses on a global basis in the following five segments: Automotive; Info-communications; Electronics; Environment & Energy; and Industrial Materials. We have been contributing to society through environmental friendly and fair business activities globally. Further information is available here https://global-sei.com/.

Südkabel GmbH, based in Mannheim, specialises in the manufacture of Medium-voltage, High-voltage and Extra High-Voltage XLPE insulated power cables and cable accessories, as well as in installation and services. Founded in 1898 Südkabel is one of the most experienced supplier of cable systems up to 525 kV including planning and engineering with a track record of more than 1,500 km 400/500-kV XLPE cables and more than 3,000 accessories installed world wide.